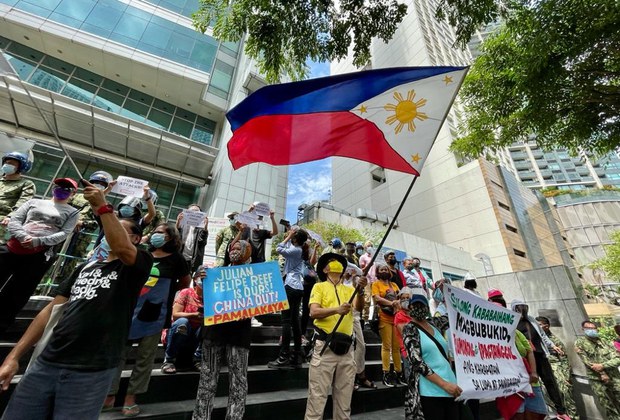 The Philippines marked the fifthÂ anniversary Monday of a landmark arbitral ruling that went against Chinaâ€™s expansive South China Sea claims, by warning that Manila rejected any attempt to â€œeraseâ€ the verdict, while Beijing dismissed it as a â€œpiece of waste paper.â€

Meanwhile, U.S. Secretary of State Antony Blinken marked the anniversary by saying the two Asian nations were bound under international maritime law to comply with the 2016 ruling by the Permanent Court of Arbitration in The Hague.

Washington would invoke its mutual defense commitments should Philippine forces be attacked in the contested waterway, he warned. Americaâ€™s top diplomat issued the statement on the same day that a U.S. warship conducted a freedom of navigation mission in the South China Sea near the Paracel Islands.

In Manila, the Philippine Department of Foreign Affairs said President Rodrigo Duterte had previously stated that the ruling was part of international law.Â

â€œThe award is final. We firmly reject attempts to undermine; nay, even erase it from international law, history and our collective memories,â€ Foreign Secretary Teodoro Locsin Jr. said in a statement.

â€œOn this anniversary, we once again urge all interested parties to heed the call for a rules-based international order and refrain from acts that may exacerbate this tense situation in the area,â€ he said in a statement. â€œConsistent with Philippine national policy, we shall continue to seek

In 2013, the government of then-President The late Benigno Aquino III sued Beijing before the Permanent Court of Arbitration in The Hague over Chinese claims in the South China Sea that encroached upon most of Manilaâ€™s exclusive economic zone (EEZ). The case marked the first time any nation had challenged China over its maritime sovereignty.

On July 12, 2016, the court ruled in Manilaâ€™s favor, declaring its sovereign rights to an EEZ as valid over Beijingâ€™s historical claim as demarcated by the so-called Nine-Dash Line on official Chinese maritime maps.

In Beijing on Monday, the Chinese foreign ministry maintained its stance on the South China Sea.

â€œThe award of the arbitration is illegal, null and void. It is nothing more than a piece of waste paper,â€ ministry spokesman Zhao Lijian said at a daily press conference, as he challenged U.S. military efforts in the maritime region.

The United States has conducted drills that â€œillegally intruded into Chinaâ€™s territorial waters,â€ he said. â€œSince the beginning of this year, the U.S. side conducted close-in reconnaissance for nearly 2,000 times and over 20 large-scale military drills on the sea. The U.S. allegation of â€˜freedom of navigationâ€™ in the South China Sea threatened is simply untenable.â€

Chinaâ€™s Peopleâ€™s Liberation Army reported on social media that it sent ships and planes to â€œwarn them and send them awayâ€ on Monday after the USS Benfold, a guided-missile destroyer, after it entered Chinese-claimed waters near the Paracels, according to media reports.

China claims nearly all of the South China Sea as its own, but five other Asian governments â€“ Brunei, Malaysia, the Philippines, Taiwan and Vietnam â€“ have territorial claims. While Indonesia does not regard itself as a party to the South China Sea dispute, Beijing claims historic rights to parts of the sea overlapping Indonesiaâ€™s exclusive economic zone.

One of those countries, Vietnam, said on Monday that it wanted all sides involved to respect and fully implement the legal obligations in the United Nations Convention on the Law of the Sea (UNCLOS), cooperate and actively contribute in preserving peace, stability, security, safety and freedom of navigation in the South China Sea.

â€œThe PRCâ€™s statement about this mission is false,â€ the U.S. Navy said in a statement on its website, referring to the Peopleâ€™s Republic of China. â€œThe United States will continue to fly, sail, and operate wherever international lawÂ allows, as USS Benfold did here. Nothing PRC says otherwise will deter us.â€

In his statement, Blinken said freedom of the sea was an enduring interest of all nations.

â€œNowhere is the rules-based maritime order under greater threat than in the South China Sea. The Peopleâ€™s Republic of China continues to coerce and intimidate Southeast Asian coastal states, threatening freedom of navigation in this critical global throughway,â€ he said.

Meanwhile in Metro Manila, dozens of members of the fishermenâ€™s group Pamalakaya joined activists in protesting outside the Chineseâ€™ consulate to demand that Chinese ships leave the Philippinesâ€™ EEZ and other disputed waters.Â

â€œThese are Filipino fishers standing up against China and upholding our rights in the West Philippine Sea,â€ Hicap said.

The West Philippine Sea is how Manila refers to its EEZ and territories it claims in the South China Sea.

â€œLikewise, this is a defiance against President Duterte who has completely turned his back on our national sovereignty and the Filipino people. Our own governmentâ€™s cowardice and submission to China will not stop us from asserting what is rightfully ours.â€

He said fishermen have been losing millions of pesos every year to the destruction of coral reef by Chinese reclamation and illegal poaching within the countryâ€™s territory.

In a report released Monday on water quality in the Spratly Islands, U.S.-based Simularity said satellite imagery had verified that hundreds of ships anchored there were dumping raw sewage on the on the reefs they are occupying, â€œleading to a cascade of reef damage that can take decades to recover.â€

Such damage directly affects fish stocks in the South China Sea, said Similarity, which describes itself as having software that â€œautomatically analyzes geospatial imagery and data to automatically find and classify unusual changes.â€

â€œThis is a catastrophe of epic proportions and we are close to the point of no return,â€ the report said.