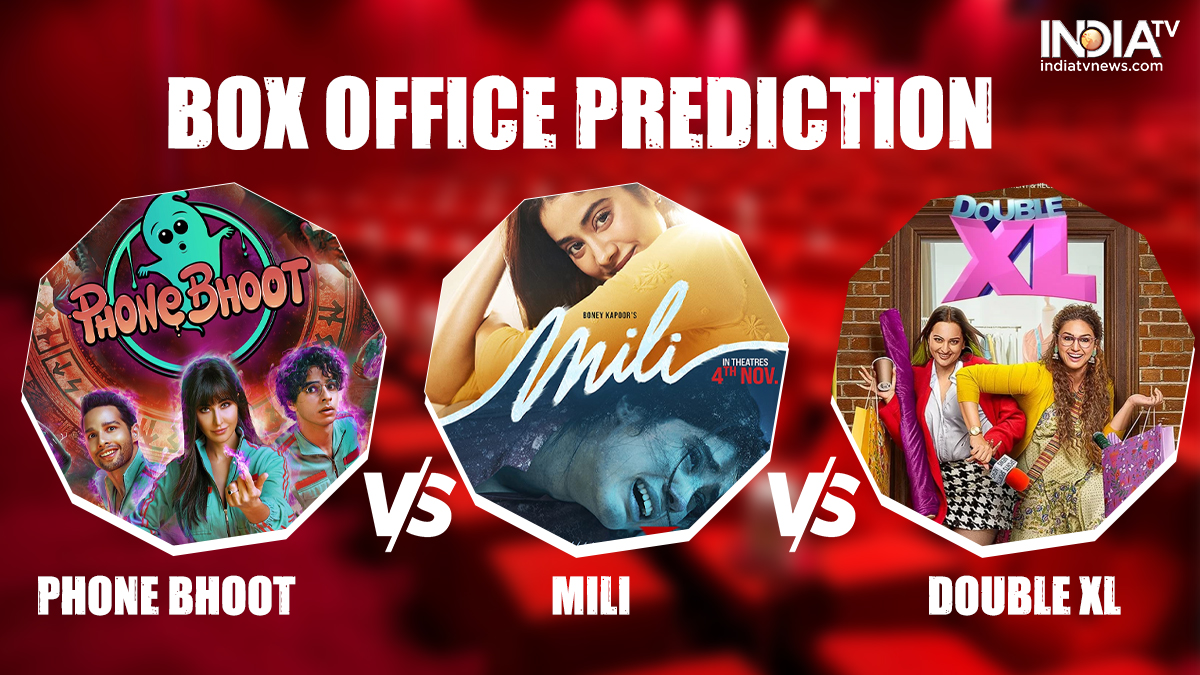 Phone Bhoot Vs Mili Vs Double XL Box Office Prediction: This Friday, November 4, moviegoers will be in for a massive treat as three films, namely Phone Bhoot, Mili and Double XL are releasing on the big screens. All of them are in different genres and the storyline of each is very different from the other. While Phone Bhoot is a horror comedy starring Katrina Kaif and an ensemble cast, Janhvi Kapoor‘s Mili is a survival thriller about a woman trapped inside a freezer fighting for her life. Double XL, on the other hand, is a movie with a social message and stars Sonakshi Sinha and Huma Qureshi. Since three films will be fighting it out at the box office, the competition will be tense. Let’s find out, which of these is in the lead and is eyeing more promising returns.

Phone Bhoot, Mili and Double XL should have been marketed more

The box office has proved to be dynamic over the past few months. While most of the movies with huge expectations are underperforming, some sleeper hits have emerged too. With Phone Bhoot, Mili and Double XL releasing at the same time, producer and film business expert Girish Johar opines, “Many films are releasing at the same time and it is a good thing. If the makers would have marketed the films more, the start at the box office could have been better. If the films manage to pull in their dedicated audiences, it is good for the film industry as a whole. However, trending for the films is a little below the par.”

As per Johar, Phone Bhoot will be leading at the box office on the opening day. He says, “In the Hindi market, Phone Bhoot will be ranked on top. The awareness level for it is better and the marketing has been good. I can see it getting an opening of Rs 2 crore, give or take. This will be a decent start for it. There is craze for Janhvi Kapoor in the youth so Mili will be ranked at the number two spot. However, the promotions have been limited. I feel it can open at around Rs 1 crore. But word of mouth will be crucial. Double XL can get an opening of Rs 60-75 lakh. However, the box office is dynamic and the results are heavily driven by word of mouth.”

Read: HIT 2 Teaser: Adivi Sesh looks dashing in cop uniform, will leave you in splits until…

Meanwhile, Ram Setu and Thank God, which were released on Diwali, have got the lowest collections ever for Hindi films. Putting this into perspective, will the audience show up for the three new releases? On this Johar stated, “Audience is certainly there and they are watching the movies. Black Adam and Kanatara’s success is proof of that. The taste and preferences of the viewers have changed drastically. In all positivity, we are hoping there is one dark horse at least this Friday.”