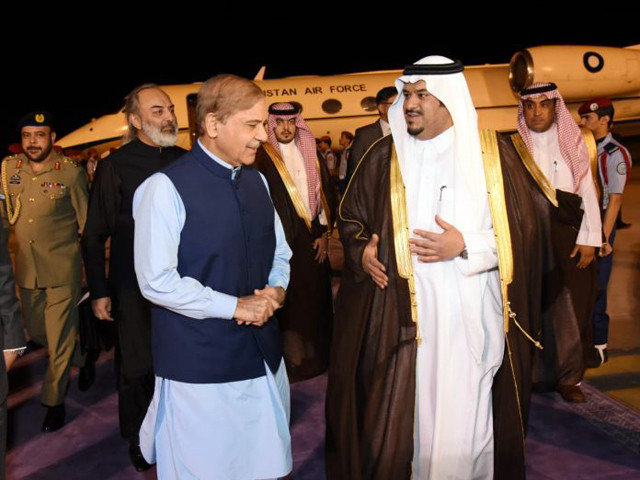 Prime Minister Shehbaz Sharif on Monday arrived in Saudi Arabia on a two-day visit, mainly to attend the Future Investment Initiative Summit dubbed as “Davos in the desert” being held in Riyadh from October 25-27.

The prime minister is undertaking the visit on the invitation of Saudi Crown Prince and Prime Minister Mohammed bin Salman.

At the airport, Governor of Riyadh Faisal bin Bandar bin Abdulaziz Al Saud received the prime minister who was accompanied by a delegation comprising the federal ministers.

Earlier in the day, he departed for the visit from Nur Khan Air Base.

Prior to his departure, Shehbaz Sharif in a series of tweets said the present state of the global economy needed “new thinking and bold vision to overcome the irritants and forge new paths”.

Shehbaz Sharif said there were serious concerns about the threat of global recession hitting the economies.

“The pandemic and climate-induced disasters have already put immense strains on the developing countries,” he said, adding that it was high time the world explored solutions to the deepening challenges through candid dialogue.

There are serious concerns about the threat of global recession hitting the economies. The pandemic & climate-induced disasters have already put immense strains on the developing countries. High time the world explored solutions to the deepening challenges through candid dialogue https://t.co/n0KdODZRZx

The Foreign Office in a statement said, “During his stay in Riyadh, the prime minister will hold consultations with the Saudi crown prince to review the longstanding fraternal relations, with a view to further strengthening the multifaceted cooperation, especially in the economic field”.

Hundreds of delegates from around the world including government officials, business leaders and even CEOs of American companies are attending the two-day Future Investment Initiative summit in Riyadh. The conference will kick off on Tuesday.

The ‘Davos in the desert’ is taking place at a time when Saudi Arabia and the US clashed over Riyadh’s move to cut oil supplies despite request by President Biden to the contrary. The US officials were not invited to the investment summit, according to the organisers. However, 400 CEOs from different American companies will be in attendance. A strong Chinese delegation will be in Riyadh highlighting Saudi Arabia’s push to diversify its options and look beyond the West.

Pakistan considers the conference as an opportunity to draw world’s attention towards the climate-induced floods.

Shehbaz is visiting Saudi Arabia as the Saudi crown prince is also planning to visit Pakistan next month. Prime Minister Mohammad bin Salman is expected to travel to Islamabad next month on a crucial visit Pakistan is hoping will lead to yet another financial bailout package from the oil-rich Arab nation.

Though officials are tightlipped and not sharing details of the visit, sources confirmed to The Express Tribune that the two countries were in touch to prepare for the visit. Foreign office did not respond when asked to confirm the visit.

There are reports that the Saudi crown prince may make a stopover in India on his way to Indonesia in mid-November, to meet with Prime Minister Narendra Modi. The visit is expected to last a few hours on November 14, and both leaders are expected to depart for Bali to attend the G-20 summit there on November 15-16, according to Indian media.

While MBS is keen to travel to Islamabad, there are concerns that the visit may be delayed or put on hold if Imran Khan decided to launch the much-anticipated long march against the government.

PM Shehbaz invited the Saudi de facto ruler on a visit to Pakistan when he visited Saudi Arabia in July.