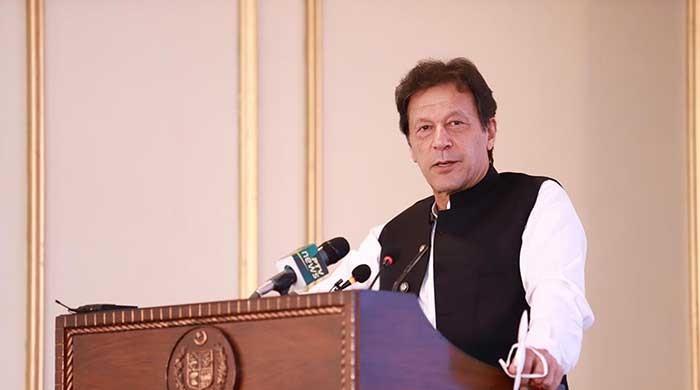 Prime Minister Imran Khan on Wednesday said that connectivity will play an important role in the development of the country’s backward areas and technology, in this regard, will be the most crucial element that will come into play.

He admitted that Pakistan’s Balochistan province has been neglected for a long time and suffers from worryingly high levels of poverty.

The premier was addressing the signing ceremony for the award of contracts by Universal Service Fund (USF) for the provision of voice and high speed mobile broadband data in Balochistan and Sindh.

He said that the area from where Sui gas was supplied to all over the country is itself extremely underdeveloped and is no better than one from the stone ages.

“This lop-sided development has a very negative impact on society,” he said.

The premier spoke of how poor nations become poorer when all of the nation’s wealth is parked into rich countries and despite money laundering laws in place, only rich countries are protected, while the poor are not.

“The result is economic migrants […] going by ship, drowning in the seas, carrying their children with them. Then these [rich countries] put up fences and walls to keep them out,” he continued.

PM Imran Khan said that the result of this kind of inequitable and unjust development is then borne by societies.

Speaking of Pakistan, he highlighted how the general populace remained neglected due to the cropping up of English medium schools, who ran their affairs in a business-centric manner.

“Unfortunately, the system has been such that a small section of society gets an English medium education and the rest of the society gets neglected.

“The governmentâ€™s Urdu medium [schools] used to produce the best intellectuals of Pakistan but then slowly English medium schools started opening up everywhere with a view for money making and government schools were left behind,” the prime minister said.

Speaking of countries like Malaysia and South Korea, the premier said that there was a time when Pakistan was a role model for other countries.

“We were left behind due to elite capture,” PM Imran Khan said.

Speaking of the signing of the memoranda of understanding today, he termed it a “very positive” development.

“We thought of connecting the most backward areas with other areas. Connectivity is a great driving force to raise the standard of living of people from such areas.

“We saw how Gilgit-Baltistan was completely cut off from the rest of the world until the Karakoram Highway was built,” the prime minister said.

Speaking of his own experience, he said that people used to rush and surround outside visitors and hand them fruit because it was a thing of such rarity for them to see people from other areas of the country.

He said due to connectivity, Hunza valley’s literacy rate is higher than most parts of Pakistan.

PM Imran Khan said that the advent of the mobile phone also changed how people approached education. He said that even domestic workers now know full well how to operate mobile devices and have social media accounts of their own.

The premier said that in the next age, known as the fifth industrial revolution, better connectivity â€” 4G and 5G â€” will play a great role and have a great impact on development.

“The virtual education concept has caught on […] Now we have got the idea due to COVID-19 that areas where it is difficult to have good schools or send teachers â€” in remote areas â€” we can have a virtual education system.”

Now our conferences are also virtual. The UNGA meeting was also held virtually, he added.

The prime minister said he wants to stress that Digital Pakistan is the future of Pakista.

Lauding the work done by the IT ministry, he underscored that more needs to be done.

Addressing IT minister Syed Aminul Haque he said “your idea of IT parks is very important”.

“If your IT parks are developed then it directly impacts IT export.”

The prime minister said that the rest of countries are ahead of us but our biggest advantage is that Pakistan has the second youngest population.

“We have a young population, we have vibrant, young people if we use this fact in the right manner and use IT and connectivity then I am confident we can increase our exports,” he added.