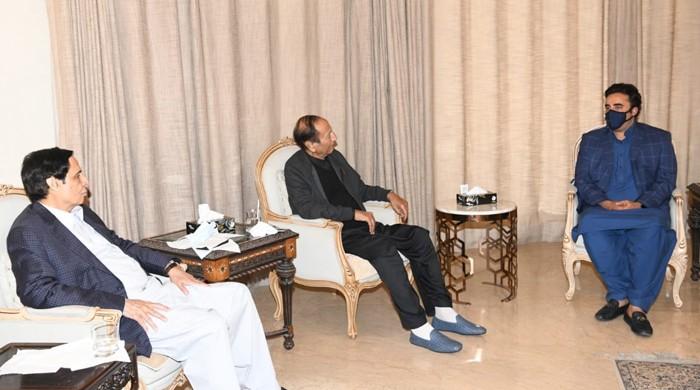 PML-Q chief Chaudhry Shujaat Hussain and Punjab Assembly Speaker Chaudhry Pervez Elahi have made it clear they will not be supporting the opposition in the upcoming Senate election for chairman and deputy chairman.

Although the 11-party opposition alliance has yet to announce a candidate, it is believed that they will be fielding PPP stalwart Yousuf Raza Gilani, who recently defeated government candidate Abdul Hafeez Shaikh in the race for the Islamabad general seat in the Senate.

PPP Chairman Bilawal Bhutto-Zardari, along with Syed Yousaf Raza Gilani, Chaudhry Manzoor, Hassan Murtaza and Qamar Zaman Kaira called on Chaudhry Shujaat Hussain and Chaudhry Pervaiz Elahi today at their residence in Gulberg, Lahore, to ask them for their vote in favour of the opposition.

In this regard, Chaudhry Shujaat said that he has respect for Bilawal, but will not be supporting the opposition candidate.

He said that the government is an ally, and has already been assured of the Chaudhrys’ support for their candidate, incumbent chairman Sadiq Sanjrani.

â€œWe stand by the Prime Minister Imran Khan led government in the senate election as a matter of principleâ€, Chaudhry Shujaat said to Bilawal.

Chaudhry Pervaiz Elahi said: “We donâ€™t back out of our promise and it is against our principles to break a solemn commitment.”