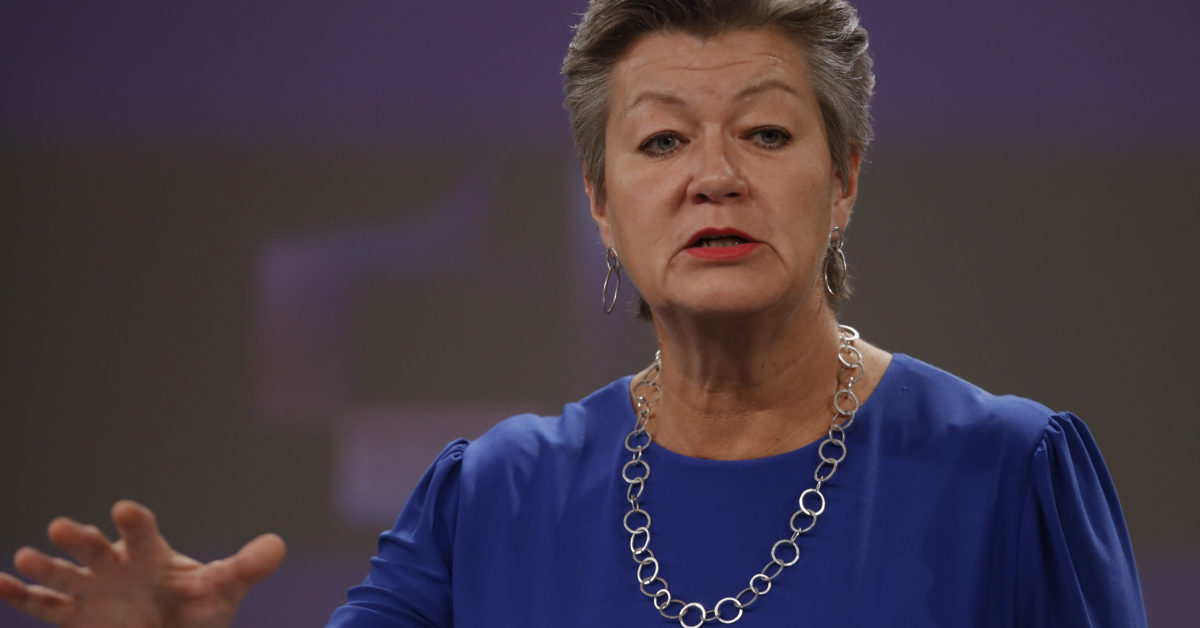 WARSAW â€” There is growing disquiet over the Polish governmentâ€™s approach to the migration problem unleashed by Belarus.

EU Commissioner for Home Affairs Ylva Johansson was in Warsaw Thursday to talk to Polish Interior Minister Mariusz KamiÅ„ski about the situation on the border with Belarus.

â€œWe agreed that Belarusâ€™ actions must meet with a firm response from the EU member states,â€ KamiÅ„ski tweeted Thursday evening shortly after the meeting.

At least five people have died in the border zone where a state of emergency has been declared, closing a 3-kilometer-wide border strip to any outsiders including the media. Poland is also refusing to turn to the EUâ€™s Frontex border agency, which is based in Warsaw, for help, despite growing pressure from Brussels to do so.

On Thursday, Amnesty International accused the Polish government of illegally turning back people to Belarus. The human rights organization used satellite tracking to follow the path of 32 people, who it said were on the Polish side of the border on August 18, but a day later were back in Belarus.

â€œAmnesty International believes that this movement could constitute evidence of an unlawful pushback because it appears that the movement occurred as armed Polish border guards surrounded the refugeesâ€™ makeshift camp,â€ the NGO said.

There was no immediate reaction from the Polish government.

The government has tried to bolster support for its position by attempting to paint the hundreds of migrants trying to cross into Poland as potential terrorists and sexual deviants; an astonishing news conference on Monday saw the countryâ€™s interior and defense ministers showing a video that they allege was found on a phone chip in the area portraying a man having sex with a horse. The material was broadcast on the state media.

â€œPhotos of people from the Middle East in uniform, a man about to have intercourse with an animal, photos of naked children only slightly covered with a black stripe, were to cast a shadow on everyone storming our eastern border,â€ the conservative Rzeczpospolita newspapers wrote in an editorial, adding: â€œ[The pictures] were supposed to sow fear, hatred, and appeal to racist stereotypes. You send the military against monsters, not humanitarian missions.â€

The opposition also charges the government with bad faith.

â€œWe witnessed a scandal and emotional blackmail against Poles, which after 24 hours turned out to be simply a lie and manipulation,â€ former Interior Minister BartÅ‚omiej Sienkiewicz told TVN24 television.

The government continues to stand by its decision to declare the state of emergency along the border to prevent migrants from crossing into Poland.

â€œWe are not talking about refugees but about mass migration. People who cross the border are not in danger in Belarus. They were brought in by the Lukashenko regime and are being used as weapons for political reasons,â€ KamiÅ„ski said during Mondayâ€™s press conference.

He then said after meeting Johansson that Poland â€œgrants international protection to people whose life and health are at risk, as exemplified by the assistance provided to Belarusians persecuted by the Lukashenko regime and the evacuation of around 1,300 refugees from Afghanistan.â€

Warsaw and Brussels agree that the people trying to enter Poland, Lithuania and Latvia from Belarus are being used as a weapon against the EU by Belarusian leader Alexander Lukashenko. Belarus has increased the number of flights from the Middle East and is in talks with Venezuela about opening a direct route to Minsk.

The number of migrants trying to cross from Belarus into Poland has been growing since August. More than 300 attempts at crossing the border with Belarus were recorded on Wednesday alone, Polandâ€™s Border Guard said. So far this month, the figure is approaching 6,000 â€” compared to around 100 for all of last year.

Despite the frontier crackdown, people are still getting through. Hundreds have made it as far as Germany, where theyâ€™re housed in a camp near the Polish-German border.

Rather than turn to the EUâ€™s Frontex, the Polish government is relying on the Border Guard, police and military, as well as a new barbed-wire fence running along the border.

â€œI think it could be a good idea to invite Frontex to be part at the Polish-Belarusian border to also visibly show that this is an European protection of the border and also because we have expertise in Frontex â€¦ they can also help with the intelligence on how this mechanism of smuggling is working â€¦ of course is for the Polish government to decide that,â€ Johansson told POLITICO earlier this week.

KamiÅ„ski tweeted after meeting Johansson that â€œPoland has been actively cooperating with Frontex since the beginning of the crisis and is in constant contact with its leadership.â€

He had also earlier said that Poland is sending text messages to deter people from attempting the crossing.

â€œThe Polish border is sealed. BLR authorities told you lies. Go back to Minsk! Donâ€™t take any pills from Belarusian soldiers,â€ reads the text message, which officials said was sent to migrants close to the border who were within range of the transmitting stations.

But there is also growing worry that the Polish authorities are forcibly turning people back to Belarus and not allowing them to ask for asylum.

â€œWe are aware of the cynical game played by Alexander Lukashenko but we refuse to accept that Poland â€” a member state of the European Union for 17 years â€” is using equally inhumane tactics,â€ Fundacja Ocalenie, an NGO working for refugees and migrants, wrote in a letter to Johansson.

The EU commissioner said after her visit to Poland Thursday that, â€œThe aggression from the Lukashenko regime deserves a firm and united response from EU. Poland, as a strong EU Member State, can show that the capacity to protect the border can be matched with the ability to respect EU fundamental rights and obligations.â€

She added that a delegation of her home affairs and migration department would visit Poland next week on Wednesday to continue discussions.