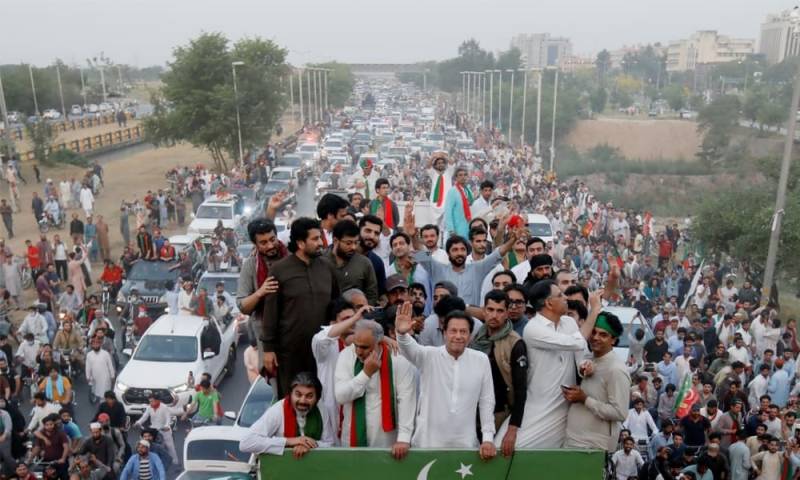 Ahead of the Pakistan Tehreek-e-Insaf (PTI) jalsa (public gathering) in Rawalpindi, the police have advised PTI Chairman Imran Khan to wear bulletproof jacket for the rally and keep his movement secret.

As per the notification sent by police to PTI leadership, it has been said in the letter that the instructions of the police should be ensured for VIP security.

The Rawalpindi police have further suggested that a bulletproof rostrum must be installed for the former premier and he must wear a bulletproof jacket. It was also advised that Imran Khan must not come out of his car in a public place.

Rallies from different parts of the country are travelling to the garrison city of Rawalpindi to resume PTI’s long march as Imran Khan wants to mount pressure on the government for fresh elections.

The PTI chief will also rejoin the major rally in his first public appearance since an assassination attempt earlier this month, when he sustained bullet wounds after his long march was attacked near Wazirabad city of Punjab. Since then, he has been addressing the crowds via video link before he halted the “Haqeeqi Azadi” march till November 26.

The PTI has shared various videos on its official Twitter handle, showing convoys moving towards the Rawalpind for public gathering.

A large convoy can been seen leaving Gilgit-Baltistan for the Pindi Jalsa as party supporters are enthusiastic to listen to their leader Imran Khan.

Venue Relocated to Rehmanabad from Faizabad

The PTI has once again changed the venue from Faizabad to Rehmanabad on Murree Road while the Imran Khan’s helicopter will land at Pir Mehr Ali Shah Arid Agriculture University from where he will head to the venue for the major rally.

The deputy commissioner Rawalpindi said that the PTI had been granted permission to hold the public meeting at Rehmanabad, adding that the party has been asked to implement the conditions laid down for the event.

Earlier, the party was scheduled to stage the power show at Faizabad.

To Build Pressure For Fresh Elections

PTI Chairman Imran Khan on Friday said that his party will continue to mount pressure on the incumbent government till elections.

Speaking to a TV channel – in an interview – ahead of the PTI’s power show, the PTI chief said, “I am making my way to Rawalpindi for the nation’s sake. My nation will make its way to join the PTI power show, merely for me”. He highlighted the quality of the Army Chief, saying that no Army Chief could stand against the interest of his own institution.

Giving his clear-cut views over holding talks with the rulers of the incumbent government, Imran reiterated that talks would only be held over the matter of elections.

It is pertinent to mention here that earlier Interior Minister Rana Sanaullah had also asked PTI leadership to postpone their rally as Imran Khan’s life is in danger.