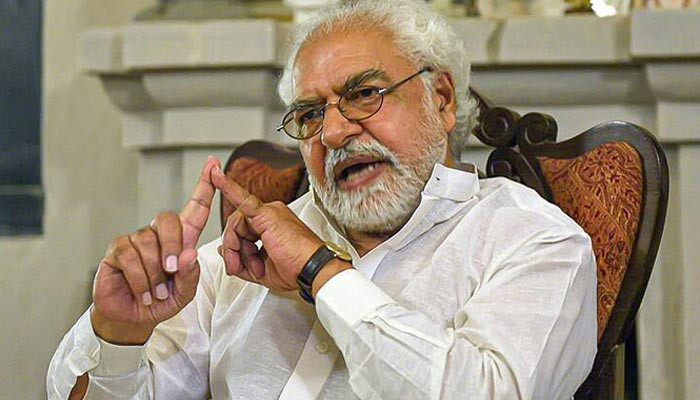 ISLAMABAD: The police on Saturday arrested veteran journalist and PTI member Ayaz Amir in connection with the murder of his daughter-in-law Sara Inam.

Police sources spoke of a rift between Shahnawaz and Sara, stating that the suspect had not informed his wife about his two previous marriages and demanded money from her time and again on false pretexts.

According to the sources, the suspect fraudulently registered a car — which Sara had purchased for herself — on his own name.

A row broke out between the two after Sara found out what her husband had done, the police sources said.

The sources further said that when Sara demanded  her money back and the ownership of her car, Shahnawaz “murdered her”.

As per the sources, Shahnawaz was a drug addict and would ask Sara for money every now and then.

They said that Sara had not informed her parents — residing in Canada — about her marriage to Shahnawaz.

The murdered woman was also a Canadian national and was working at an important position in the United Arab Emirates’ economics ministry.

Both Sara and Shahnawaz connected via social media. Three months ago, the victim came to Pakistan and Shahnawaz’s friends had the two married in Chakwal, police said.

Their marriage, according to the police, is not registered in Pakistan.

The victim agreed to marry her husband considering his father is a renowned journalist.