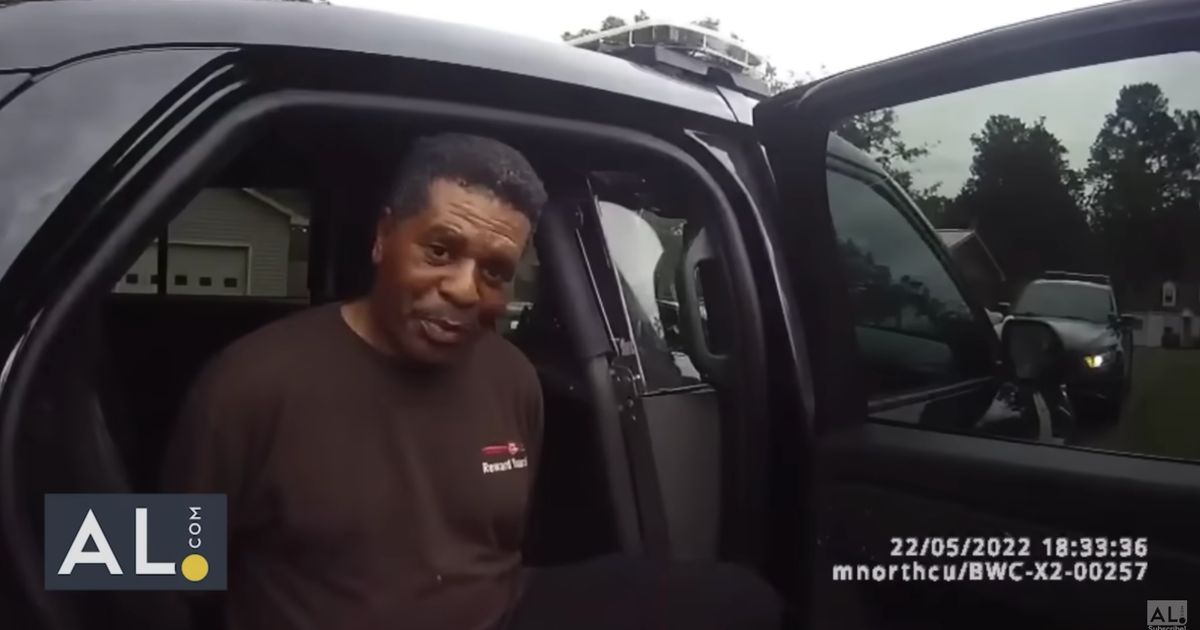 Michael Jennings was dutifully watering his out-of-town neighbors’ flowers — upon their request — when he was approached by police. Bodycam footage released this week by Jennings’ attorneys show that within minutes, he was arrested, handcuffed and placed in the back of a cruiser.

“I’m supposed to be here. I’m Pastor Jennings. I live across the street,” Jennings told an officer during the May 22 exchange in his neighbors’ driveway in Childersburg, Alabama.

“I’m looking out for their house while they’re gone, watering their flowers,” he added.

Jennings told ABC News that he is now considering filing a racial discrimination lawsuit against the Childersburg Police Department.

HuffPost reached out to the Childersburg Police Department for comment and was hung up on.

The 20-minute video posted to YouTube by AL.com (above) captured his subsequent arrest. During the initial confrontation, police tell Jennings they are responding to a call about a vehicle and a person that’s “not supposed to be here.”

“They called about it. … I don’t know,” the officer says to Jennings.

Jennings then seems to shrug the call off, and continues to water the flowers, but tells officers his name and explains to police he’s looking out for his neighbors’ home while they’re gone.

Police then ask Jennings — who says in the video he used to be an officer himself — for identification. Jennings refuses, telling the officer that he’s not doing anything wrong.

The officer then repeatedly refers to Jennings as “suspicious person” — which seems to irritate Jennings, who says he’s not doing anything suspicious.

“You want to lock me up, lock me up. I’m not showing y’all anything,” Jennings says. “I’m going to continue watering these flowers. I don’t care who called y’all. Lock me up and see what happens.”

Jennings is soon handcuffed. As he sits on his neighbors’ porch, he tells officers his son was just racially profiled. Right afterward, an officer begins to yell at Jennings and an agitated Jennings yells back. He is eventually escorted to the back of a police cruiser.

Following Jennings’ arrest, police locate the neighbor who says she called them. Upon seeing Jennings, she tells authorities that she recognizes him.

“He lives right there, and he would be watering their flowers. This is probably my fault,” the woman tells police, explaining that Jennings is friends with the homeowners.

But despite the woman telling officers she knows Jennings, he was still arrested and charged — although the charges were later dismissed in June by a municipal judge, NPR reported.

“This video makes it clear that these officers decided they were going to arrest Pastor Jennings less than five minutes after pulling up and then tried to rewrite history claiming he hadn’t identified himself when that was the first thing he did,” Harry Daniels, an Atlanta-based attorney representing Jennings, told NPR in a statement.

Alabama law states that any officer “may stop any person abroad in a public place” if they suspect that the person is committing or has committed a felony or another public offense. They could then demand the person’s name, address and explanation of actions. Jennings’ lawyers argue in their statement to NPR that he did not have to provide identification to law enforcement because “he was not in a public place.”

Jennings explained to ABC News that he was “agitated” during the incident. But he said he was also confused and fearful that resisting arrest would be life-threatening.

“I was trying to cooperate even though I didn’t understand what was going on,” he told ABC News. “I was angry, but I knew to comply.”

He also said that the experience was traumatizing. He noted to ABC that he has a collection of Black history memorabilia, which include a pair of antique handcuffs from the 1800s. He said he thought of them when he was being handcuffed by police.

“This thing came to my mind, that to be shackled and to have your freedom taken away from you, it’s something else. It’s dehumanizing,” he said. “It’s something that gives you nightmares.”