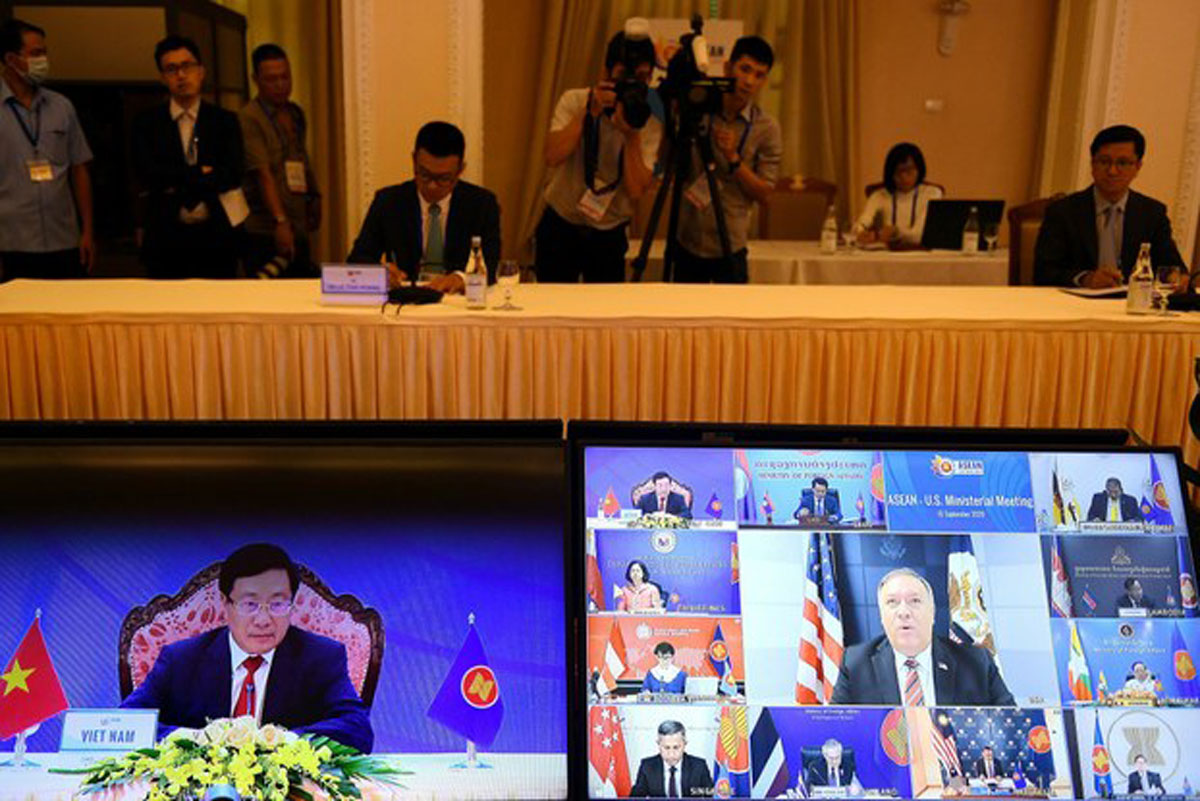 United States Secretary of State Mike Pompeo on Friday reaffirmed Washingtonâ€™s commitment to Southeast Asia and accused China of â€œaggressionâ€ in the South China Sea and manipulating the flow of the Mekong River in a time of drought.

Touting U.S. investment in the region and support for the COVID-19 response of the Association of the Southeast Asian Nations (ASEAN), Pompeo said Washington will speak out in the face of Chinaâ€™s â€œthreats to sovereign nationsâ€™ ability to make free choices.â€

â€œWe stand with our ASEAN partners as we insist on the rule of law and respect for sovereignty in the South China Sea, where Beijing has pursued aggressive campaigns of coercion and environmental devastation,â€ Pompeo said in a statement released during a summit of top ASEAN diplomats held online this week and hosted by Vietnam.

The top U.S. diplomat accused China of exacerbating the drought in nations downstream on the Mekong River.

â€œWe stand for transparency and respect in the Mekong region, where the CCP [Chinese Communist party] has abetted arms and narcotics trafficking and unilaterally manipulated upstream dams, exacerbating an historic drought,â€ Pompeo said.

His statement did not provide evidence to support the allegation of the CCP aiding weapons and drugs smuggling.

Laos, Thailand, Cambodia and Vietnam have been grappling with variable water flow on the Mekong that supports the livelihoods of tens of millions of people. While poor rains have caused the drought, environmentalists say dams that China has constructed on the upper reaches of the river have worsened the situation.

Pompeoâ€™s rhetoric underscores the rapid deterioration in U.S.-China relations on a raft of issues in recent months, including trade, the status of Hong Kong, the plight of Uyghur Muslims and Chinaâ€™s assertion of â€œhistoric rightsâ€ to most of the disputed South China Sea.

On Thursday, Pompeo had urged Southeast Asian countries to reconsider business deals with the 24 Chinese companies that Washington sanctioned last month for their roles in constructing Beijingâ€™s artificial islands in the South China Sea.

In recent years, Beijing has undertaken major reclamation of disputed land features in the Paracel and Spratly island chains.

ASEAN nations Brunei, Malaysia and the Philippines also have territorial claims in the South China Sea and seek to use resources in areas that China claims for itself.

For its part, Beijing this week accused the U.S. of interference in the regionâ€™s affairs. On Wednesday, Foreign Minister Wang Yi called the U.S. the â€œbiggest driver of militarization of the South China Sea,â€ Chinese media reported.

Southeast Asian nations are uneasy about being caught in the war of words between the U.S. and China.

In the ASEAN joint communique made public on Thursday, the bloc, which operates by consensus, expressed concern over increased tensions in the South China Sea and called for resolution of disputes in accordance with the U.N. Convention on the Law of the Sea, or UNCLOS.

A day before that, Indonesian Foreign Minister Retno Marsudi told reporters that the groupâ€™s countries did not want to â€œget caught up in the rivalry between major powers.â€ Vietnam, too, said on Wednesday that the dispute threatens regional stability and that countries should settle the acrimonious row by adhering to international law, including the 1982 UNCLOS.

While Fridayâ€™s toughly worded statement from the U.S. was issued by Pompeo, the State Department public schedule showed that his deputy, Stephen Biegun, was the leading U.S. delegate at the ASEAN virtual meetings that day.

Pompeo was traveling to the Middle East to attend the opening of Afghan peace talks.