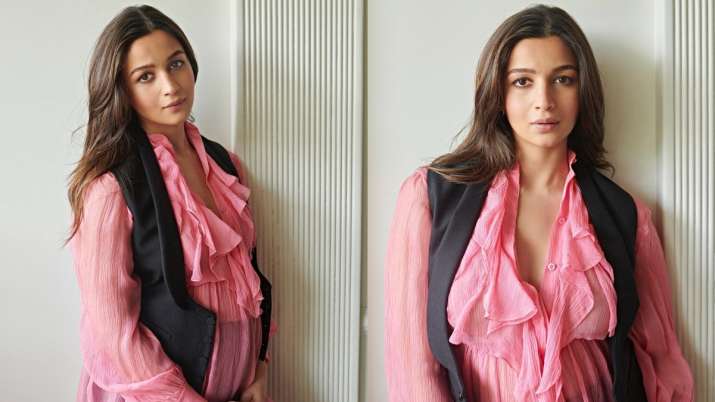 Alia Bhatt has redefined maternity fashion by keeping it absolutely simple, chic and very comfortable. From loose T-shirts to colorful short dresses, Alia has aced the fashion game with her stylish looks. On Friday, the actress took to Instagram and shared some ‘radiant’ glimpses of herself, flaunting her baby bump to the fullest in a pink sheer-ruffled top. Alis who is expecting her first child with her husband, actor Ranbir Kapoor looked like a breath of fresh air in the pictures. Check them out below:

In these glimpses, the ‘Highway’ star could be seen donning a black vest over a sheer pink top and paired with black pants. In the first photo, she hugged her baby belly with both hands while looking at the camera. The second was a close-up of her giving the camera a seductive look. Alia completed her look with dewy makeup and glossy lips and gentle wavy hair.

Her post not only amazed her fans but her family and industry friends also showered love in her comment section. Proud Bua’s Kareena Kapoor Khan and Riddhima Kapoor wrote lovely comments for Alia in the comment section. Kareena penned, “Uffffff owning it and howwwww Love youuu”. On the other hand, Riddhima commented, “glow beauty”.

Meanwhile, Alia announced that she is expecting her first child with Ranbir in June this year. The couple tied their knot on April 14, 2022, after dating for many years at Ranbir’s Mumbai residence in an intimate ceremony. Just after two months of their marriage, the couple treated their fans with such a big surprise.

On the work front, Alia was last seen in Darlings which received a lot of love and praise from critics and audiences. The film was released last weekend and has been on top of the Netflix charts. Alia will next be seen sharing the screen with Ayan Mukherji’s Brahmastra: Part 1 Shiva.