President Alvi slowly getting back to ‘normal routine’ 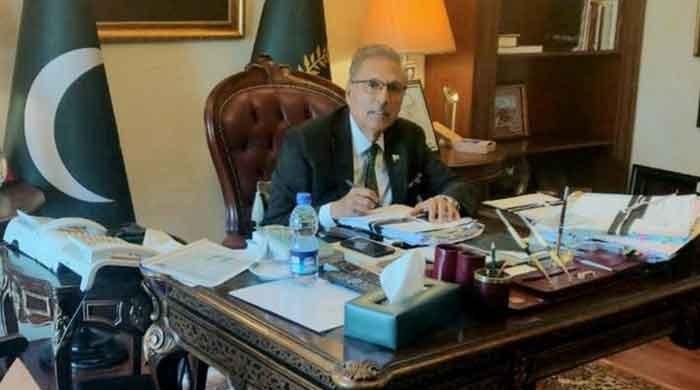 President Arif Alvi is “slowly getting back to normal routine” after testing positive for coronavirus, roughly two weeks ago.

The president’s health update was shared on Twitter by his son, Awab Alvi. He also shared a picture of the president, sitting on his official desk, pen in hand.

“Happy to share that the President of Pakistan Arif Alvi slowly getting back to normal routine – with abundant official work piled up, he’s been eager to return,” wrote his son in a tweet on Monday.

“He’s better, but still taking care,” wrote Awab, thanking everyone for praying for the Pakistani president.

Alvi had announced on March 29 that he had tested positive for coronavirus, a few days after receiving the first coronavirus jab.

“I have tested positive for Covid-19. May Allah have mercy on all Covid affectees. Had 1st dose of vaccineØŒ but antibodies start developing after 2nd dose that was due in a week. Please continue to be careful,” he had tweeted.

President Alvi had said he received the first dose of the coronavirus vaccine on March 15, 2021, but added that immunity against the infection is only developed after receiving the second jab, which was due in a week.

He had also appealed to the masses to “continue to be careful” [and practice the government’s coronavirus standard operation procedures] to keep themselves safe.

Doctors, however, said the vaccine did not have enough time to be effective and that PM Imran Khan may have contracted the virus a few days prior to developing symptoms for it.