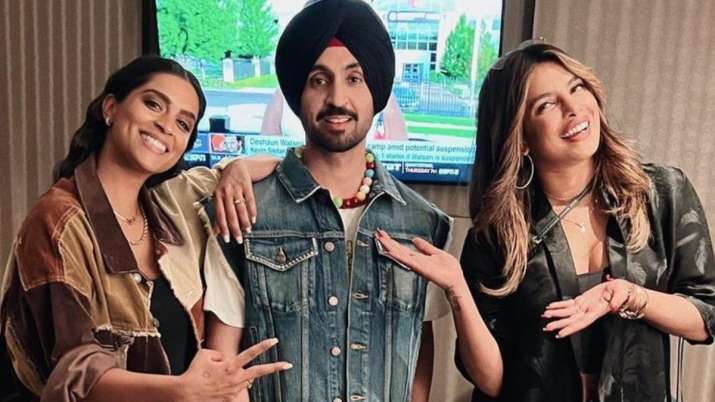 Priyanka Chopra shared pictures with singer Diljit Dosanjh and YouTuber Lilly Singh from their fun time together. The actress attended Diljit’s concert with Lilly in Los Angeles and then the trio clicked pictures ‘bowing’ for each other with folded hands. Taking to her Instagram handle, Priyanka Chopra shared some candid pictures with the Punjabi singer and Lilly Singh and showered praise on the former. The pictures show the three of them trying to outdo respecting each other by bowing lower.

The Desi girl dropped a few pictures and videos from the concert. Calling Diljit a superstar, Priyanka wrote “There are a few things that will warm your heart as much as a taste of home. Also, when your people are in town! You show the F up!! I had a much-needed super fun night out watching @diljitdosanjh doing what he does best! He had the audience wrapped around his finger! None of us sat even for a moment! You’re such a superstar, @diljitdosanjh. I highly recommend you get tickets to Diljit’s current tour!”

“Also, kudos to the team that made it so comfortable and awesome for my friends and me! Thank you, @lilly, for always having the best ideas for nights out! Lots of Love! PS- watch us trying to outdo respecting each other! I’ll bow lower! Lol! #DesiThings #DesiCrew,” she added. Reacting to the post, Lilly Singh commented “Big Vibessss.”

Earlier, Lilly Singh had shared a video of herself and Priyanka grooving at Diljit Dosanjh’s concert. She captioned it, “Punjabiii.” Responding to her post, Diljit said, “We are proud of you ladies.” ALSO READ: Priyanka Chopra slays at her Mexico birthday party with Nick Jonas, Parineeti & others; see UNSEEN pics

The global icon will be seen in international projects such as ‘It’s All Coming Back To Me’, and the series ‘Citadel’. Produced by Russo Brothers, ‘Citadel’ will hit the OTT on Prime Video. The upcoming sci-fi drama series is being directed by Patrick Morgan and stars Richard Madden alongside Priyanka. In Bollywood, the actress will start shooting for Farhan Akhtar directorial ‘Jee Le Zaraa’ in September with Alia Bhatt and Katrina Kaif. ALSO READ: Are Priyanka Chopra and Nick Jonas planning another baby via surrogacy? Here’s what we know