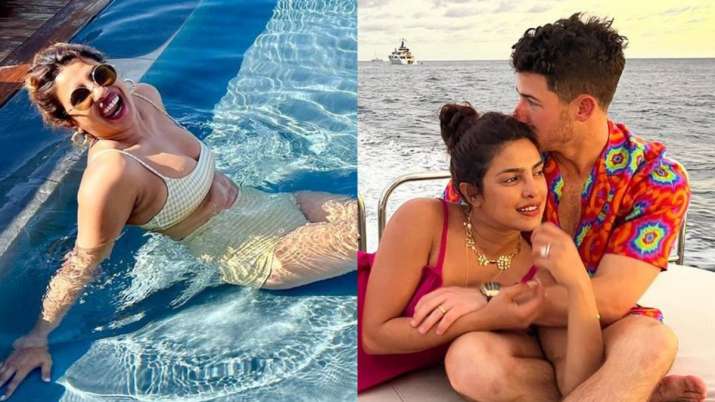 Priyanka Chopra once again treated her fans and followers with some stunning pictures from her pool day at Los Angeles home. But this time what caught everyone’s attention was her husband and singer Nick Jonas‘ adorable reaction to her pictures. As Priyanka shared a glimpse of what goes behind those perfect shots, Nick couldn’t hold himself ack from showing his ladylove with a cute comment.

On Saturday morning (IST), The Sky is Pink actress dropped some drool-worthy pictures from her infinity pool. The actress can be seen smiling her heart out in one of the pictures, while she is posing in the other. Sharing the series of pictures, she wrote, “Instagram vs reality.” Priyanka also gave photo credit to writer Cavanaugh James.

The pictures reveal how Priyanka gave a sophisticated pose to get the perfect shot for Instagram. In reality, she couldn’t control her laughter as she gets clicked.

Priyanka’s husband and singer Nick Jonas commented, “Damn,” followed by a lit emoji. Her fans also showered their love for the actress. One of them wrote, “They’re both so cute! and that smile!” Another said, “Desi girllllll.”

Yesterday also Priyanka shared a few pictures from her alone time in the pool as she relaxed and enjoyed 90s songs. “When u get a few unexpected hours of self-care. Sound ON!! Can u recognise the songs I’m listening to? Share in the comments. #90smusic #desigirl #sunshine #poolday,” she wrote in the caption.

Priyanka and Nick tied the knot in 2018 in an extravagant three-day affair in India. The couple welcomed a baby girl this year through surrogacy.  According to a birth certificate obtained by TMZ, they have named her Malti Marie Jonas. Malti’ is of Sanskrit origin and means a small fragrant flower or moonlight.

On the work front, Priyanka will next be seen in Farhan Akhtar’s ‘Jee Le Zaraa’ which will also feature Alia Bhatt and Katrina Kaif. Apart from this, she will also be seen in the Hollywood film ‘It’s All Coming Back To Me’ co-featuring Celine Dion and Sam Heughan.