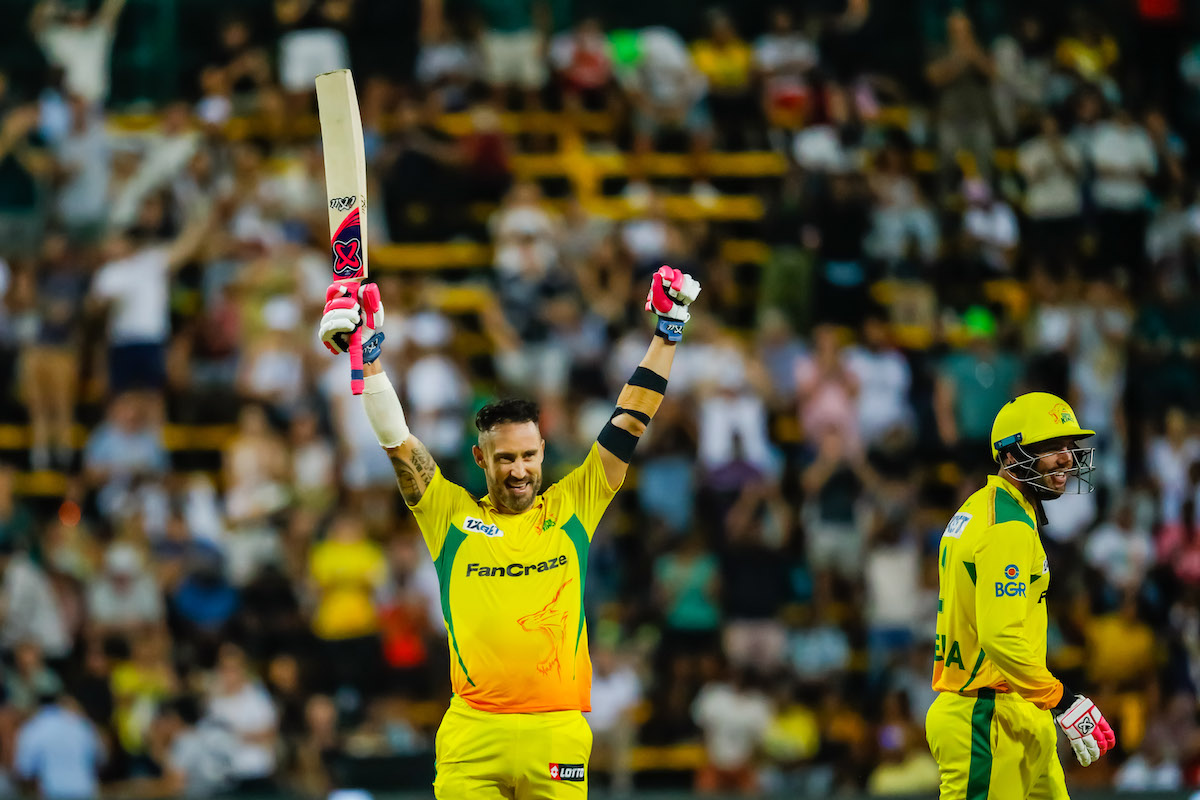 Joburg Super Kings captain Faf du Plessis entered the record books at the Wanderers on Tuesday evening when he struck the maiden century of the SA20.

It was a scintillating innings that lasted only 58 balls, but yielded 113 electrifying runs. It included eight boundaries and eight sixes.  Du Plessis was the star of the Bullring as he tore into Durban’s Super Kings bowling attack.

Du Plessis had Reeza Hendricks as company for the majority of the innings with the opening pair putting on 157 for the first wicket. Hendricks was very much a supporting act though with the Proteas opener compiling 45 off 46 balls.

The partnership was the perfect platform for the Super Kings to chase down the Super Giants’ 178/6 with Du Plessis striking the winning runs with five balls remaining.

This knock comes as news Proteas limited-overs coach Rob Walter said he would be open to discussions with 38-year-old Du Plessis about resuming the batsman’s international career.

Du Plessis retired from Test cricket two years ago, but is still available for ODI and T20I selection. He was overlooked for both the 2021 and 2022 T20 World Cup squads by the Proteas selectors despite excelling in T20 leagues around the world.

“Faf has not retired yet,” Walter told Rapport newspaper when asked about the possibility of recalling Du Plessis. “He is still playing very good T20 cricket. He will build his future around T20 leagues.

“I haven’t spoken to him at all yet, but if he would like to talk about the possibility of playing for South Africa again, I would be open to that. He is a quality player, and the more quality players you have who want to play for South Africa, the better. If he’s one of those players, that’s great.

“Does this mean he will play for South Africa again? I do not know.”

Unfortunately for the Super Giants their chances of qualifying for the playoffs are now slim as they remain at the foot of the table.

Quinton de Kock’s team had given themselves hope through Heinrich Klaasen’s 65 off 48 balls and a pair of 28’s from West Indian duo Kyle Mayers and Jason Holder at the top and bottom end of the innings.

Maheesh Theekshana (3/30) and Gerald Coetzee (3/21) ensured the Super Giants did not run away entirely.

However, the thousands that streamed into the Wanderers once again would remember this special evening as the night Du Plessis struck the first century of the SA20.