PTI lawyers protest in front of SC | The Express Tribune 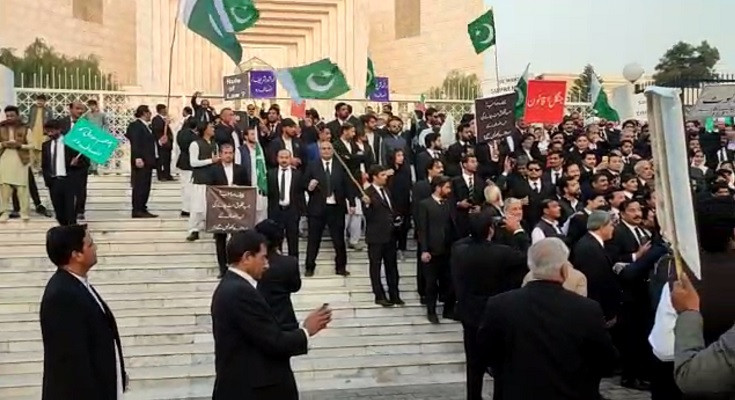 
Hundreds of lawyers from the Pakistan Tehreek-e-Insaf (PTI) protested in front of the Supreme Court on Friday demanding suo moto notice over the failure to register a first information report (FIR) after the assassination attempt on party chief Imran Khan as per his version.

The lawyers also protested the privacy breach faced by PTI Senator Azam Swati after a private video of him and his spouse was leaked, as well as the murder of senior journalist Arshad Sharif.

The lawyers could be heard chanting “we want justice”.

Ever since PTI chief Imran Khan had a brush with death in a failed assassination attempt, the ensuing controversy and deadlock have brought a document into the limelight that hitherto went unnoticed – the FIR, a bible that shapes the proceedings of a criminal case till the very end.

Right from the hospital bed after the attempt on his life, Imran has with sustained energy accused three powerful people in the country – the prime minister, interior minister and a senior military officer – for allegedly plotting against him but has simultaneously been expressing his inability to nominate them in FIR despite having his government in Punjab.

The matter of the registration of the first FIR, which the experts said shouldn’t have been a complicated matter and lodged against whomever Imran wished, ended up before the country’s top court and ultimately got registered by the state without having the names of the three people.

PTI leadership insisted that the names of the three people should be included in the case as otherwise, it would just be a piece of paper for them.