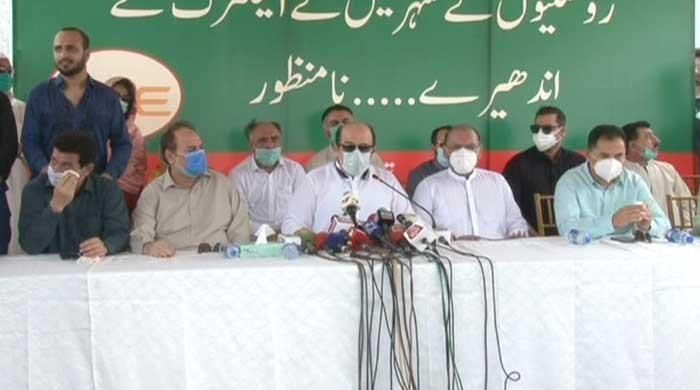 Pakistan Tehreek-e-Insaf Sindhâ€™s leaders and MPAs have announced a sit-in in Karachi against its electricity problems and demanded the federal government bring in another electric supply company in Karachi to end the monopoly of K-Electric.

Opposition Leader in the Sindh Assembly Firdous Shamim Naqvi, in a press conference outside K-Electricâ€™s office, said that the people of the metropolis are sick of the company. He added that the time has come that another system of electric supply should be given to the city.

â€œK-Electric does not have the capacity to take more than 600 megawatts of electricity from the national grid,â€ said Naqvi. He added that distribution should be given to other companies through a tender before 2023.Â

The people of Karachi have been suffering from power outages since the start of the summer .Â

Even though KE assured Sindh Governor Imran Ismail last month that unannounced load-shedding in the city would come to an end in 48 hours and an increase in the power supply from the national grid from the usual supply of 650 megawatts (MW) to 800MW, the load-shedding of more than 12 hours continues in the city unabated on Saturday.

Meanwhile, the CEO of KE Moonis Alvi while talking in Geo News programme â€˜Naya Pakistan’ claimed that no loadshedding was taking place in the port city at the moment.Â

While talking to host Shahzad Iqbal, the K-Electric CEO claimed that the demand for electricity had dropped to 3,000MW which KE could easily generate.Â

â€œThe trouble begins when the load increases beyond our generation capacity of 3,200 MW and the demand surges to 3,600 MW. There was also no loadshedding during the initial days of lockdown in the city from March 20 to May 28,â€ he claimed.