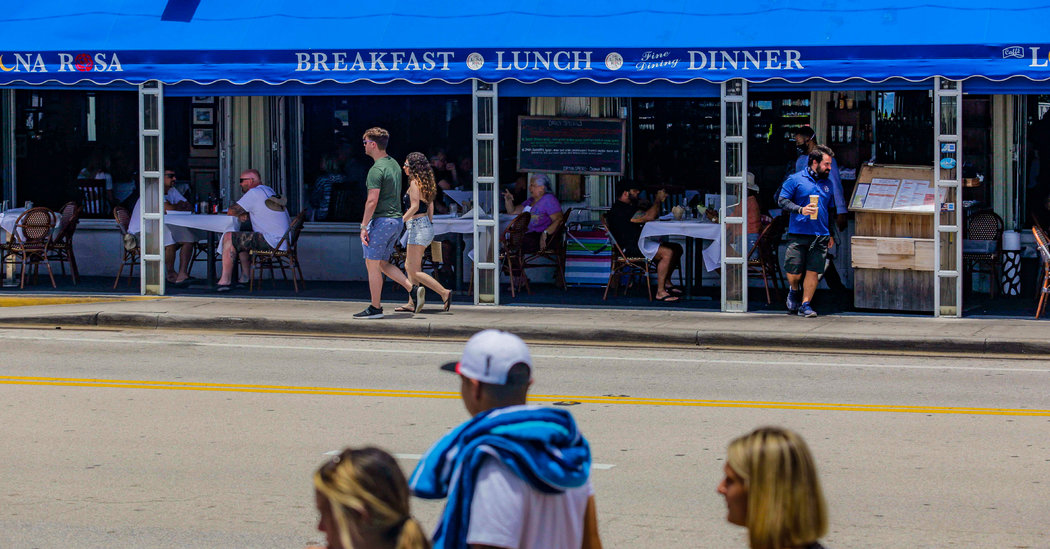 Public health experts warned on Sunday that the coronavirus pandemic is not going away anytime soon. They directly contradicted President Trumpâ€™s promise that the disease that has infected more than two million Americans would â€œfade awayâ€ and his remarks that disparaged the value of evidence from coronavirus tests.

A day after President Trump told a largely maskless audience at an indoor rally in Tulsa, Okla., that he had asked to â€œslow down the testingâ€ because it inevitably increased the number of confirmed coronavirus cases, infectious disease experts countered that the latest rise of infections in the United States is real, the countryâ€™s response to the pandemic is not working and rallies like the presidentâ€™s risk becoming major spreading events.

Dr. Tom Inglesby, the director of the Center for Health Security at the Johns Hopkins Bloomberg School of Public Health, said on â€œFox News Sundayâ€ that the spikes in confirmed cases in many states in the South and West are not simply a result of increased testing. Data show that the percentage of tests that are positive is increasing, he said, and in some states is accompanied by increased hospitalizations. In states like Arizona, Texas, North and South Carolina and Florida, he said, â€œThatâ€™s a real rise.â€

On â€œFace the Nationâ€ on CBS, Dr. Scott Gottlieb, the former commissioner of the Food and Drug Administration, said, â€œWeâ€™re seeing the positivity rates go up. Thatâ€™s a clear indication there is now community spread underway, and this isnâ€™t just a function of testing more.â€

And Dr. Michael T. Osterholm, the director of the Center for Infectious Disease Research and Policy at the University of Minnesota, repeated his call for a national plan to respond to the pandemic, calling the existing patchwork of state-by-state policy â€œdisjointed.â€

In an interview on NBCâ€™s â€œMeet the Press,â€ Dr. Osterholm noted, â€œWeâ€™re at 70 percent of the number of cases today that we were at the very height of the pandemic cases in early April.â€

He said that although his center had put out a report in April showing different possible waves and troughs of infection as the pandemic progressed, he had changed his thinking: â€œI donâ€™t see this slowing down for the summer or into the fall.â€

â€œI think this is more like a forest fire,â€ he said. â€œI think that wherever thereâ€™s wood to burn, this fire is going to burn it.â€

The experts mainly urged greater use of proven interventions to slow the spread of disease, like hand-washing, mask-wearing and maintaining social distancing when out in public.

When asked whether states should consider reversing the levels of reopening, Dr. Inglesby did not recommend a return to lockdown.

â€œEach state has a different story,â€ he said, adding that â€œleaders should be encouraging people to use the tools we know work.â€

He said indoor gatherings like the presidentâ€™s rally were a concern, as were outdoor demonstrations like the mass protests against police brutality, but to a lesser degree. â€œWe know from what weâ€™ve seen so far in the last few months,â€ said Dr. Inglesby, â€œthat outdoors is less of a risk than indoors and that mask use has a major impact.â€

The Centers for Disease Control and Prevention, he noted, has advised that â€œthe highest-risk gatherings are those that are large indoors, where people canâ€™t stay apart from each other more than six feet, and where people travel from out of town. And this rally met all of those criteria.â€

He and other public health specialists expressed concerns about the potential for a significant spreading event. Oklahoma has a rapidly rising infection rate, although its absolute numbers are still small. It had a record number of cases â€” 450 â€” and the last five days have been the highest the state has recorded. Deaths in that state have been in the single digits since the end of April.

U.S. cases are up 15 percent in the past two weeks, with at least 2.2 million confirmed infections since the start of the pandemic and cases on the rise in 22 states.

Earlier in the week, Mr. Trump told Sean Hannity on Fox News that the virus will disappear. â€œItâ€™s going to fade away,â€ he said.

Dr. Ashish Jha, director of the Harvard Global Health Institute, said on CNN, â€œNot only is it not fading out â€” this will be with us for at least another 12 months, and thatâ€™s the most optimistic scenario for having a vaccine.â€

Dr. Jah also responded to the presidentâ€™s comments on testing. Peter Navarro, President Trumpâ€™s trade adviser, said on â€œState of the Unionâ€ on CNN, that the presidentâ€™s comment about testing was â€œtongue-in- cheek.â€ â€œThis is unfortunately not a joke,â€ Dr. Jha said. He mentioned families who had lost relatives in nursing homes and Americans who had not been able to get tests.

Chad F. Wolf, acting secretary of Homeland Security, appearing on NBCâ€™s news program, defended the precautions taken at the Trump rally as meeting C.D.C. guidelines, since masks were offered and social distancing was voluntary. He also said the administration was trying to get the country â€œup and runningâ€ in a safe way.

â€œAnd I think weâ€™re doing a great job at that,â€ he said.