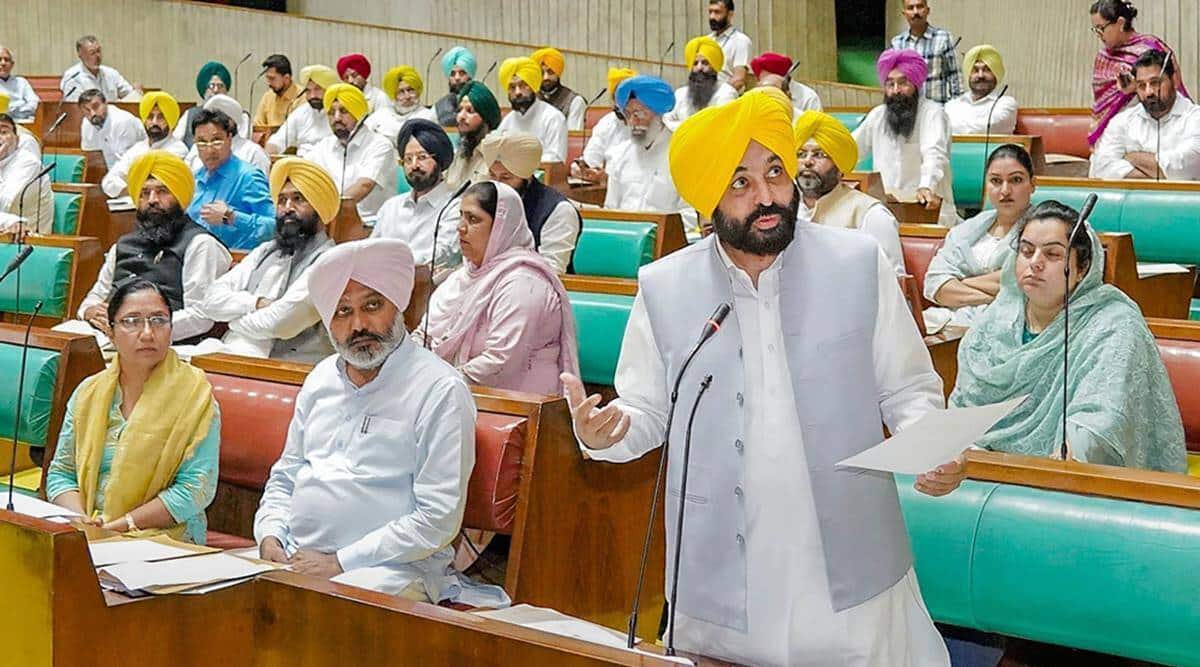 Punjab Cabinet Monday approved a policy providing for a separate cadre under which the services of contractual, ad hoc, daily wage and temporary teachers, having 10 years of experience will be regularised. A decision in this regard was taken in a meeting of the Council of Minister chaired by Chief Minister Bhagwant Mann.

In the first phase, the policy is being implemented in the education department, Chief Secretary Vijay Kumar Janjua told The Indian Express. He said 9,000 employees will be regularised of which 7,000 are teachers and the rest are non-teaching staff. The policy will be notified on Tuesday.

A three-member committee, led by cabinet Minister Harpal Cheema and formed to explore the ways and means to regularise the services of the contractual employees, submitted its report to the Cabinet which accepted the same.

The AAP government in the state had earlier announced that it was committed to regularising the services of contractual and temporary employees. The decision comes ahead of the high-stakes Assembly polls in Himachal Pradesh and Gujarat.

There are around 35,000 contractual and temporary employees in different government departments. The policy has been formulated to circumvent a Supreme Court directive on contractual employees in Uma Devi vs State of Karnataka case.

The Indian Express was first to report that the Aam Aadmi Party government has decided to bypass the legislation way and take the policy to regularise the contractual employees.

After the Cabinet meeting, the chief minister, addressimg a function Anandpur Sahib, said his government has decided to regularise the service of 8,736 teachers. He said services of 5,442 education service providers, 1,130 inclusive education teachers and others will be regularised.

Earlier, in an official statement, the government said previously various appointments to ‘Group C’ and ‘Group D’ level posts had been made on contract and temporary basis based on imminent requirements and exigencies of service. “Some of such employees have now put in more than 10 years of service. The Cabinet opined that at this stage, to relieve these employees or to replace them in this capacity in service with another set of people will be unjustified and improper,” read the statement.

“To protect their interest, state government has formulated a policy in education department under Article 162 read with entry 41 of list-II of the Seventh Schedule of Constitution of India, to ensure that such employees do not suffer from uncertainty and harassment and to grant them a security of tenure. The state government has taken a policy decision to continue such desirous suitable teachers, who fulfill the eligibility conditions, in service till the age of 58 years by placing them in a special cadre. This policy, which will benefit more than 9000 employees, has been framed only in relation to Group C & Group D posts of Education department, Punjab.”

Under the policy, the government has put up preconditions for the employees to be regularised — the employee should have worked for a continuous period of minimum 10 years till the issuance of present policy and must have possessed the requisite qualifications and experience for the post in terms of rules, if any, at the time of placement in the special cadre. The work and conduct of the applicant must have remained satisfactory as per the assessment of the department/employer during the period of 10 years service.

However, the policy will not be applicable to a person who has been engaged in an honorary capacity or on a part time basis or had attained the age of superannuation or had resigned on his own or had not been retained by the department or had been engaged on outsourced basis or is on an incentive based engagement or does not possess the requisite qualifications and experience for the post prescribed under the service rules, if any, at the time of placement in the Special Cadre or had been engaged or continues in service on account of any interim order(s), direction(s) of any Court or Tribunal; or had been convicted of any offence involving moral turpitude or charges have been framed against him in a Court of Law relating to such offence.

For the purpose of grant of continuation to these employees, they will be placed on a post, which shall not be a cadre post, by creating special cadre of posts. The process of placement of beneficiary employee will commence after submission of the application form, accompanied by all required documents, by him. The beneficiary employees, who are being placed in special cadre posts and will be allowed to continue in service till the age of 58 years. They will be treated as a fresh appointee.

The AAP had promised regularisation of services of 35,000 contractual employees. The previous government led by Charanjit Singh Channi had prepared a list of employees in various departments and had reached a figure of 36,000. Later, the incumbent government also made use of that list and came up with a number of 35,000 employees.

Earlier, the first law framed for the regularisation of contractual employees in 2016 by the then SAD-BJP government is subjudice.

The Channi government had also brought a bill – the Punjab Protection and Regularisation of Contractual Employees Bill-2021 – to regularise the services of contractual, daily wage, ad-hoc and temporary employees. It was passed in November last year. Later, the governor sent the file to the then chief minister’s office with queries for clarification.