Australia
Share
Facebook
Linkedin
Pinterest
Mix
Email
Telegram
A puppy has been reunited with its owner after it was taken when the man’s car was stolen from a Melbourne shopping centre.

Ryley, a seven-month-old German Shepherd, was in a cage inside his owner’s black Holden Commodore wagon when the car was stolen from Cranbourne West Shopping Centre at about 7.50am.

His owner, 73-year-old Roy Smith, had just run into the bakery briefly, as he does most mornings, and was highly distressed to return to his parking spot to find his car and beloved pet gone.

“I come back 90 seconds later and no car,” Smith said.

He said Ryley had only just come out of surgery yesterday and needed to be given medication.

Fortunately, the puppy was found in a reserve in nearby suburb Narre Warren South around 10.30am and taken to the local pound.

Smith’s car was then found abandoned on Marsh Grove in Berwick just before 11am.

Smith has told 3AW his car had been damaged inside and littered with hamburgers and drinks, and the cage he used for his dog was no longer inside.

However, he was just mostly excited to be reunited with his pup. 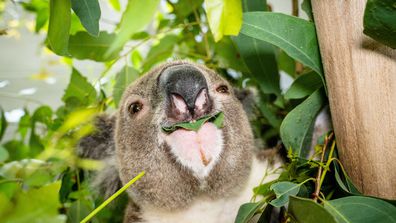 Young koala released back to the wild after life-saving surgery

“You need to watch who you hang around with,” Smith jokingly told Ryley at their reunion.

Smith said he was “over the moon” to have Ryley back.

Peter Brook, theatre genius who staged ‘The Mahabharata’, dies at 97

Temperatures drop to 10 degrees below average in Queensland

Queensland is set to experience another day of colder...
India

In a heart-warming gesture, the Prayagraj police made a...

Temperatures drop to 10 degrees below average in Queensland

Mining magnate Gina Rinehart was one of the few billionaires to buck a fortune-sucking trend, as the world's 500 richest people lost $2 trillion...
Read more

Australia news LIVE: Albanese meets with Zelensky in Ukraine; Thousands of Sydney homes at risk of flooding as heavy rain continues in NSW

The costs of phasing out coal and gas are so high that governments must redirect coal royalties and create a sovereign wealth fund from...
Read more