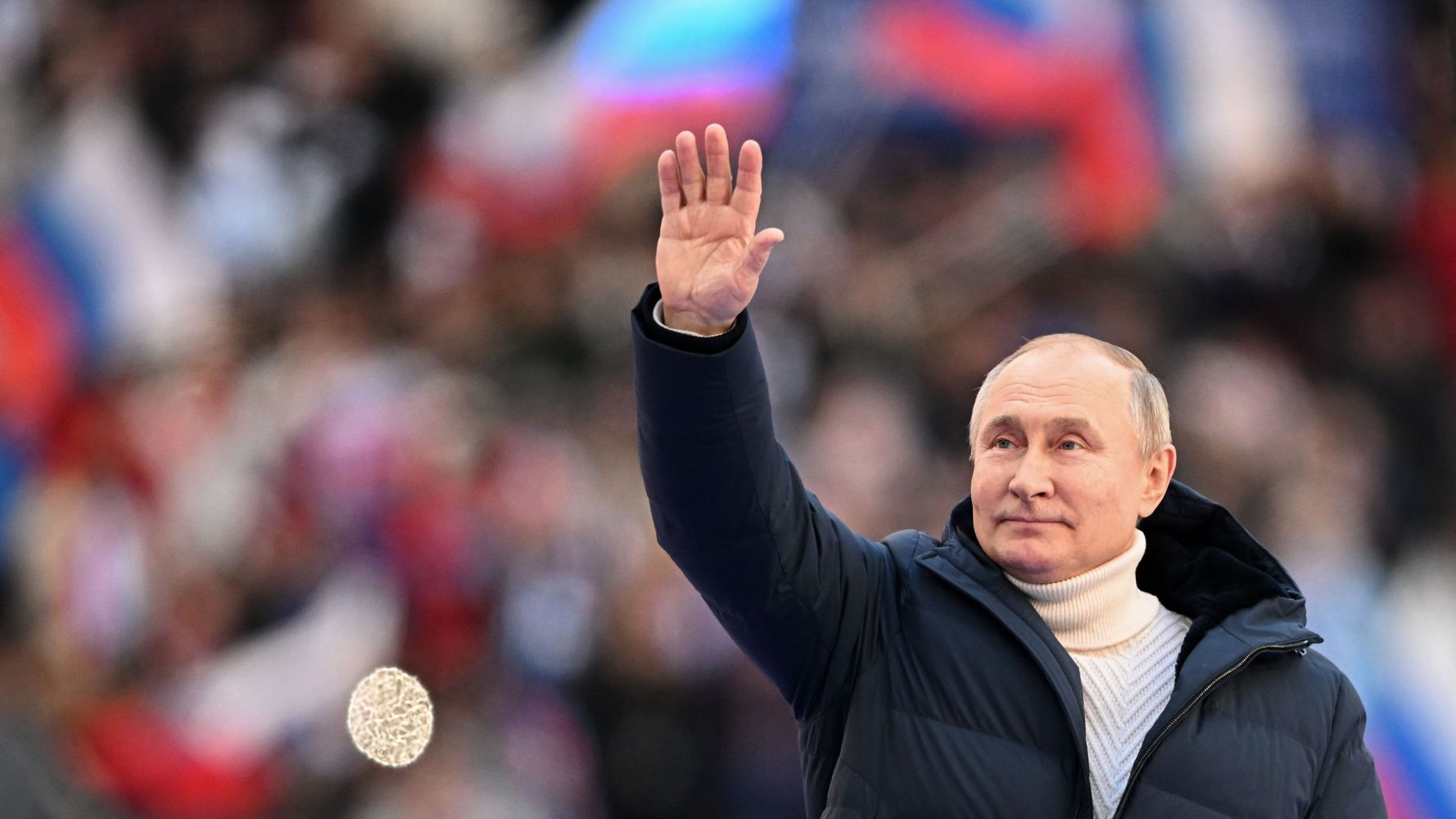 Russian President Vladimir Putin appeared at a huge flag-waving rally at a Moscow stadium and praised his countryâ€™s troops Friday as they pressed their lethal attacks on Ukrainian cities with shelling and missiles.

â€œShoulder to shoulder, they help and support each other,â€ Putin said in a rare public appearance since the invasion three weeks ago that made Russia an outcast among nations. â€œWe have not had unity like this for a long time,â€ he added to cheers from the crowd.

Moscow police said more than 200,000 people were in and around the Luzhniki stadium for the celebration marking the eighth anniversary of Russiaâ€™s annexation of the Crimean peninsula, seized from Ukraine.

The event included well-known singer Oleg Gazmanov singing â€œMade in the U.S.S.R.,â€ with the opening lines â€œUkraine and Crimea, Belarus and Moldova, itâ€™s all my country.â€

Seeking to portray the war as a just one and commend Russiaâ€™s troops, Putin paraphrased the Bible to say, â€œThere is no greater love than giving up oneâ€™s soul for oneâ€™s friends.â€ And he continued to insist his actions were necessary to prevent â€œgenocide,â€ a claim flatly denied by leaders around the globe.

Standing on stage in a white turtleneck and a blue down jacket, Putin spoke for about five minutes. Some people, including presenters at the event, wore T-shirts or jackets with a â€œZâ€ â€” a symbol seen on Russian tanks and military vehicles in Ukraine and embraced by supporters of the war.

His quoting of the Bible and a Russian admiral of the 18th century reflected his increasing focus in recent years on history and religion as binding forces in Russiaâ€™s post-Soviet society.

Financial Timesâ€™ Moscow bureau chief Max Seddon noted a glaring peculiarity during the streaming of the event: Near the end of Putinâ€™s speech, the feed appeared to cut out mid-sentence.

Turns out state TV cut out just before Putin finished the speech. He quoted Fyodor Ushakov, the legendary Tsarist-era admiral who is now the patron saint of Russiaâ€™s strategic nuclear bomber fleet, and left. pic.twitter.com/SJHpsyOWI1

The issue was later attributed to a â€œserver problem.â€

Meanwhile, Russian forces continued to pound the Ukrainian capital, Kyiv, and launched a barrage of missiles on the outskirts of the western city of Lviv.

The early morning attack on Lvivâ€™s edge was the closest strike yet to the center of the city, which has become a crossroads for people fleeing from other parts of Ukraine and for others entering to deliver aid or fight.

In city after city around Ukraine, hospitals, schools and buildings where people sought safety have been attacked. Rescue workers searched for survivors in the ruins of a theater that served as a shelter when it was blasted by a Russian airstrike Wednesday in the besieged southern city of Mariupol.

â€œBut according to our data, there are still more than 1,300 people in these basements, in this bomb shelter,â€ Denisova told Ukrainian television. â€œWe pray that they will all be alive, but so far there is no information about them.â€

At Lviv, black smoke billowed for hours after the explosions, which hit a facility for repairing military aircraft near the cityâ€™s international airport, 6 kilometers (4 miles) from the center. One person was wounded, the regional governor, Maksym Kozytskyy, said.

Multiple blasts hit in quick succession around 6 a.m., shaking nearby buildings, witnesses said. The missiles were launched from the Black Sea, but the Ukrainian air forceâ€™s western command said it had shot down two of six missile in the volley. A bus repair facility was also damaged, Lviv Mayor Andriy Sadovyi said.

Lviv lies not far from the Polish border and well behind the front lines, but the area has not been spared Russiaâ€™s attacks. In the worst, nearly three dozen people were killed last weekend in a strike on a training facility near the city.

Lvivâ€™s population has swelled by some 200,000 as people from elsewhere in Ukraine have sought shelter there.

Early morning barrages also hit a residential building in the Podil neighborhood of Kyiv, killing at least one person, according to emergency services, who said 98 people were evacuated from the building. Kyiv Mayor Vitali Klitschko said 19 were wounded in the shelling.

Two others were killed when strikes hit residential and administrative buildings in the eastern city of Kramatorsk, according to the regional governor, Pavlo Kyrylenko.

In Kharkiv, a fire raged through a local market after shelling Thursday. One firefighter was killed and another injured when new shelling hit as emergency workers fought the blaze, emergency services said.

The World Health Organization said it has verified 43 attacks on hospitals and health facilities, with 12 people killed and 34 injured.

U.S. Secretary of State Antony Blinken said Thursday that American officials were evaluating potential war crimes and that if the intentional targeting of civilians by Russia is confirmed, there will be â€œmassive consequences.â€

She said many of the daily attacks battering Ukrainian cities â€œare reportedly indiscriminateâ€ and involve the use of â€œexplosive weapons with a wide impact area.â€ DiCarlo said the devastation in Mariupol and Kharkiv â€raises grave fears about the fate of millions of residents of Kyiv and other cities facing intensifying attacks.â€

Hundreds of civilians were said to have taken shelter in a grand, columned theater in the cityâ€™s center when it was hit by a Russian airstrike.

Video and photos provided by the Ukrainian military showed the at least three-story building had been reduced to a roofless shell, with some exterior walls collapsed.

Satellite imagery on Monday from Maxar Technologies showed huge white letters on the pavement outside the theater spelling out â€œCHILDRENâ€ in Russian â€” â€œDETIâ€ â€” to alert warplanes to the vulnerable people hiding inside.

Russiaâ€™s military denied bombing the theater or anyplace else in Mariupol on Wednesday.

Ukrainian President Volodymyr Zelenskyy said early Friday that Ukraineâ€™s defenses have proved much stronger than expected, and Russia â€œdidnâ€™t know what we had for defense or how we prepared to meet the blow.â€

Both Ukraine and Russia this week reported some progress in negotiations. Earlier this week, an official in Zelenskyyâ€™s office, speaking on condition of anonymity to discuss the sensitive talks, told the AP that Ukraine was prepared to discuss a neutral military status for the country in return, in part, for binding security guarantees.

Russia has demanded that NATO pledge never to admit Ukraine to the alliance or station forces there.

The fighting has led nearly 3.3 million people to flee Ukraine, the U.N. estimates. The death toll remains unknown, though Ukraine has said thousands of civilians have died.