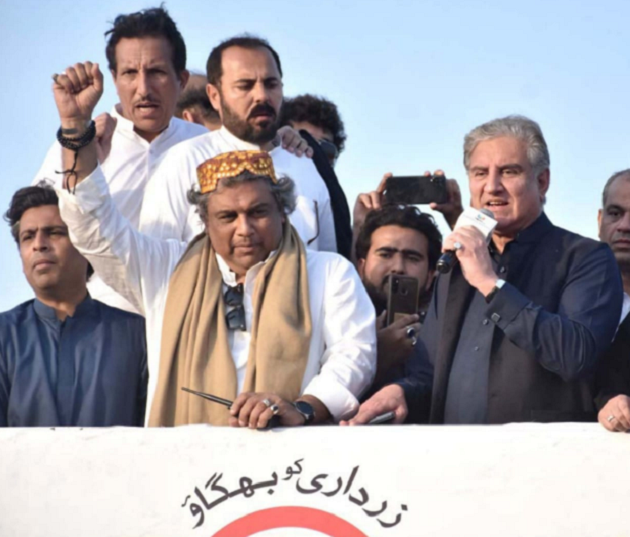 Senior PTI leader and Foreign Minister Shah Mahmood Qureshi, who is leading the partyâ€™s Ghotki-Karachi march against the PPP government in Sindh, has alleged that PPPÂ was paying Rs30,000 to each worker for participating in its long march on Islamabad using the provincial governmentâ€™s resources.

The statement comes hours after PPP chairman Bilawal Bhutto Zardari kicked off his partyâ€™s long march to Islamabad from Karachi in a bid to send the PTI-led government packing on Sunday. Meanwhile, PTI, which is in opposition in Sindh, has also launched protest rally dubbed as â€˜Huqooq-e-Sindh Marchâ€™ against the provincial government, which will culminate in Karachi on March 6 after passing through several districts of the province.

â€œBilawal, I ask youâ€¦ why Sindhâ€™s treasury is being plundered; who doled out a package of Rs30,000 to each worker of PPP for your long marchâ€¦ people of the province want accountability,â€ said Qureshi while addressing the participants of the march in Sindhâ€™s Shikarpur district earlier today.

The foreign minister claimed that the amount was distributed among the PPP workers because â€œideological activistsâ€ had left the party and added that the party founded by Bhutto family had been taken over by Zardari.

Qureshi also urged the participants not to fear Zardari and join the PTIâ€™s march.

The march, led by Qureshi, was welcomed by party supporters in Ubauro, Daharki, Mirpur Mathelo, Panu Aqil and other towns on its way to Karachi on Saturday. The PTI leaders also addressed the march in Sukkur.

â€œ[How come] a party, which has been robbing Sindh, is telling the people of Pakistan that it will provide a new leadership in the form of Bilawal [Bhutto Zardari] and that it will offer solution to the countryâ€™s problems,â€ Qureshi wondered.

He said that the people of Pakistan knew very well that â€œyou are in power in Sindh for the last 15 years and have failed to uplift the lives of the people and cannot develop the province â€¦ what message are you sendingâ€ across the country. â€œFifteen years is not a small time,â€ he added.