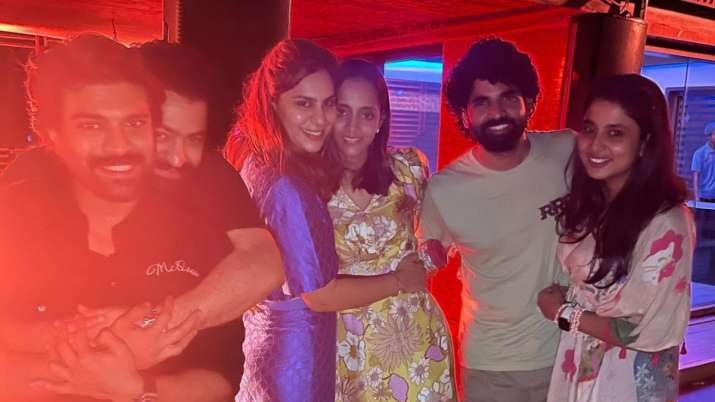 Superstar Ram Charan who is soaking in the success of his latest release RRR turned a year older on Sunday (March 27). After breaking many records with the SS Rajamouli’s magnum opus, the actor was seen celebrating his 37th birthday with his wife Upasana Kamineni, his RRR co-star Jr Ntr, SS Rajamouli’s son SS Karthikeya and their respective wives. Upasana took to Instagram and shared a glimpse of his birthday celebration. She wrote, “Happy happy birthday to my Mr C. & My sweetest @pranathi_nandamuri #famjam.”

The picture screams happiness as they all are seen posing for the camera. In no time the epost was bombarded with reactions and sweet wishes from their fans and well-wishers. One of them wrote, “Can’t take my eyes off for this beautiful Portrait click…#Worth it.” Another said, “Happiest birthday to you my dearest cherry bava garu ……”

Meanwhile one of Upasana’s videos has been going viral on social media platforms in which she can be seen cheering for her husband Ram Charan while watching his film RRR in the theatre.Â  She was spotted throwing the papers at the screen during the film’s popular song ‘Naatu Naatu.’Â