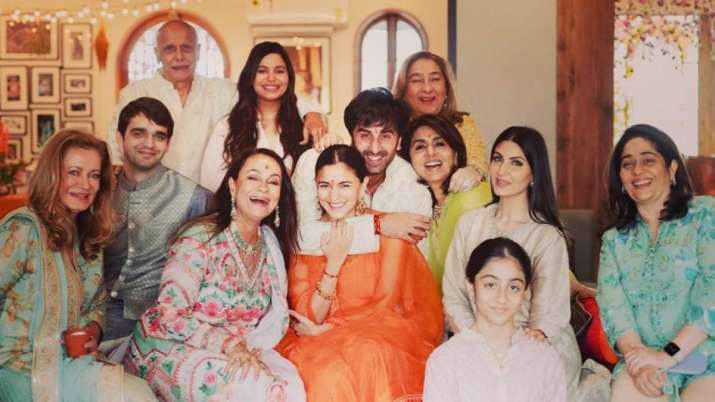 The picture is from the first ceremony, a puja held on the morning of April 13, before the Mehendi ceremony. It was held at the couple’s Vastu home. For the occasion, Alia opted for an orange suit while Ranbir chose to wear a white kurta. His sister Riddhima opted for a beige kurta and his niece Samara is in a pink kurta. “A widening inner circle,” Tina Razdan captioned the post.

Ranbir Kapoor and Alia Bhatt mesmerised one and all with their intimate wedding. Without much fanfare, the couple said their vows in the vicinity of their family and close friends. The duo got married in an intimate wedding on April 14. Kareena Kapoor Khan, Saif Ali Khan, Shweta Bachchan, Shloka Ambani, Karan Johar, Ayan Mukerji, Navya Naveli, and others attended Ranbir and Alia’s wedding. Picture perfect family: Newlyweds Ranbir and Alia pose with Kapoors and Bhatts in priceless moment