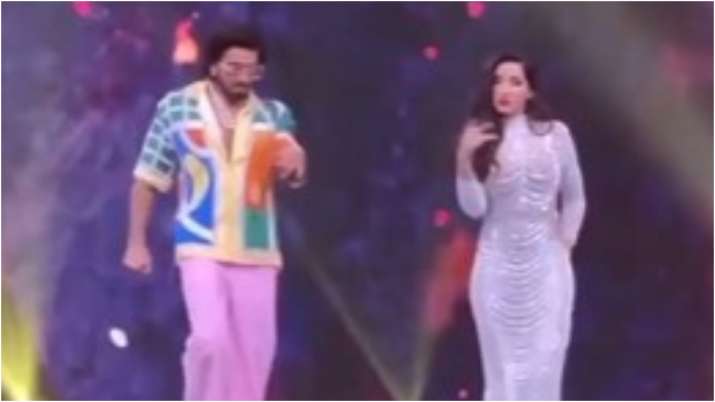 Ranveer Singh and Nora Fatehi shared the stage recently and set the floor on fire as they danced to the viral song Garmi. Ranveer follows Nora’s footsteps and jumps in and does a couple of hook steps with her, including the viral pelvic thrust movement while lying face down.

Read: EXCLUSIVE l ‘Don’t lose yourself in the process of being a mother,’ says Smriti Khanna

During the episode, Nora wears a sequin gown with a slit. She looks stunning in the glam outfit. Ranveer wears a funky, light pink trousers and a multi colour shirt. They look great together matching steps on Garmi song.

Nora is one of the judges on Dance Deewane Juniors, alongside Neetu Kapoor and Marzi Pestonji. Karan Kundrra of Bigg Boss 15 fame is hosting the dance reality show that showcases kids’ talent.

Ranveer looked out-of-the box in a multi-coloured baggy shirt. He paired it with hot pink flare pants and yellow sneakers. He also wore brown sunglasses and pearl neckpieces. He shared his look on Instagram with a candy emoji as a caption.

He also shared another video in which he dances with the child participants on the track of his upcoming film Jayeshbhai Jordaar.

The movie co-stars Shalini Pandey, Boman Irani and Ratna Pathak Shah. It will release on May 13 in cinema halls.