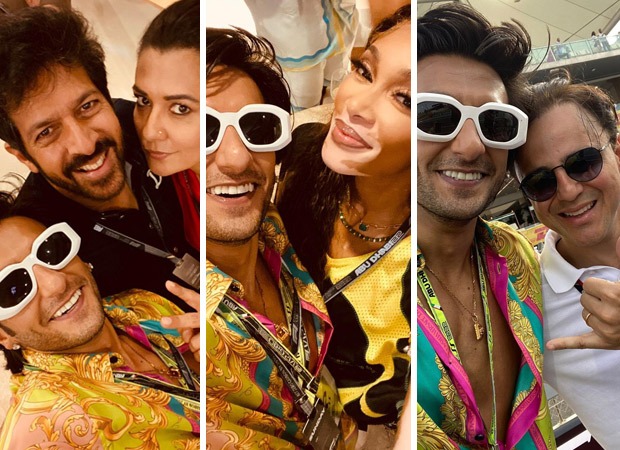 Superstar Ranveer Singh is synonymous with pop culture and is widely known to be a sports aficionado.  After attending NBA, EPL and UFC, the Indian pop culture icon was seen having a gala time at the Formula One Abu Dhabi Grand Prix on Sunday. Ranveer met and interacted with some of the biggest artists and athletes from across the globe.

He was first taken on a tour of the track by none other than Formula One legend, the revered Brazilian driver Felipe Massa.  He was then seen chatting with freshly crowned world champions from the English cricket team all-rounder Ben Stokes along with star batsman Joe Root and veteran bowler James Anderson. Known to be a fan of the Mumbai Indians franchise in the IPL, Ranveer was seen on the F1 grid in an animated discussion about the upcoming IPL season with the latest MI acquisition, the deadly pacer Jofra Archer.

He was also seen exchanging warm niceties with the swashbuckling West Indian Chris Gayle. The bonhomie, camaraderie & mutual admiration between the two was very apparent to all bystanders.  Ranveer was also overheard discussing a crossover musical collaboration with global pop star/producer Will.I.Am, as well as having a deep, insightful chat about movies with Hollywood actor/comedian Martin Lawrence.

The entire paddock was particularly amused to see the warmth and familiarity between Ranveer and former Arsenal striker Pierre-Emerick Aubameyang, with whom Ranveer seemed to have struck up an instant connection! The two even video-called a mystery person whilst they were together in the F1 paddock.

Ranveer, known for his unbridled enthusiasm, was observed to be visibly gushing over the world-record-breaking track athlete Usain Bolt, who Ranveer later described on social media as the ‘Undisputed Greatest of All time’.

The last time Ranveer met with legendary basketball centre Shaquille O’Neal they made a reel on Ranveer’s famous song ‘Khalibali’ that went viral. This time they didn’t make a reel, but instead were seen enjoying the race from the VVIP box.

Also seen with Ranveer in the VVIP box was the freshly crowned lightweight champion of the UFC, MMA sensation Islam Makhachev. Incidentally, Ranveer was watching the UFC live from the front row at the Etihad Arena the same night that Islam won the belt and became champion.

Ranveer’s rise in the world of cinema along with his vast and highly impressive knowledge all spheres including sports, films, music and fashion have earned him the distinction of being India’s Bona fide pop culture icon.  From the USA to the UK, to Marrakesh to Abu Dhabi, we are surely proud of our Baba shining like the true-blue superstar that he is at all of his International appearances and happy to see him living his best life!