Read Your Way Through Dublin 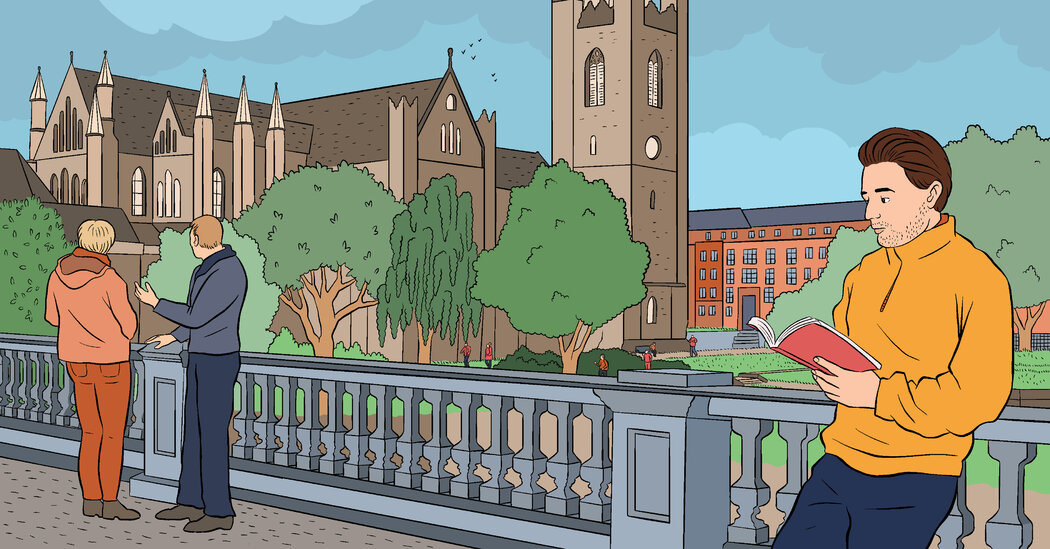 If I have no time for day trips, what books could take me there instead?

One of my favorite Irish books is “The Spinning Heart,” by Donal Ryan. The novel comprises a series of intertwined vignettes from the perspectives of various people living in a small town in western Ireland during the aftermath of the Celtic Tiger crash. It’s moving, atmospheric and beautiful, and it does a wonderful job of capturing both the time and the intricate, inescapable ways in which small-town lives are interwoven.

For a side of Cork that you probably wouldn’t want to visit in real life, go for Lisa McInerney’s dark, superbly written “The Glorious Heresies,” about a handful of very different people whose lives become entangled when a gangster’s mother bludgeons an intruder to death with a holy statue. If you want glimpses into other parts of the country in different eras, Cora Harrison’s mystery series are fun, satisfying, Brother-Cadfael-style reads. “The Burren Mysteries” are set in 16th-century West Ireland, where Mara is an investigating judge in Ireland’s old Brehon law system. The “Reverend Mother” mysteries are set in the 1920s, against the backdrop of Ireland’s Civil War, with Reverend Mother Aquinas using her knowledge of every level of Cork’s intricate social hierarchy to solve murders. Harrison is great on historical detail and neat plotting.

What books can take me behind closed doors?

“Skippy Dies,” by Paul Murray, is set at an elite boys’ school in a wealthy part of Dublin. Fourteen-year-old Skippy (surprise!) dies, and the rest of the book explores the last months of his life and the dynamics of the school. It captures all the heightened intensity and confusion of being a teenager, and it’s infused right through with the kind of passionate, razor-sharp social satire that you only get when the writer is white-hot furious at the terrible things being done to a place he loves.

“Unraveling Oliver,” by Liz Nugent, starts in the same privileged Dublin, where successful, charismatic Oliver Ryan has just beaten his wife into a coma. The rest of the book explores, from multiple perspectives, how he reached that night. The many voices are all vividly distinct, and Nugent does a wonderful job of capturing not only the layers of Oliver’s psyche but also the complicated nuances of social class in Dublin. “Howie the Rookie,” by Mark O’Rowe, offers the opposite face of the city. It’s a fast, funny, ruthlessly brutal play about two young men in a tough neighborhood whose intertwined lives crash and burn around a dead fighting fish and an attack of scabies.

And what should I listen to while I walk around?

For a wander through Dublin, there’s no way around it: You need “Ulysses.” I’m going to be a heretic, though, and say that you don’t need to read the whole thing. The language is so dazzling and multifaceted that it’s still got plenty to offer even if you just dip in here and there. Read — or listen to — passages about the places you’re passing through, or stopping in for a pint, for small illuminated windows into the city’s past. If you go for an audiobook, try the RTÉ 1982 version with full cast.