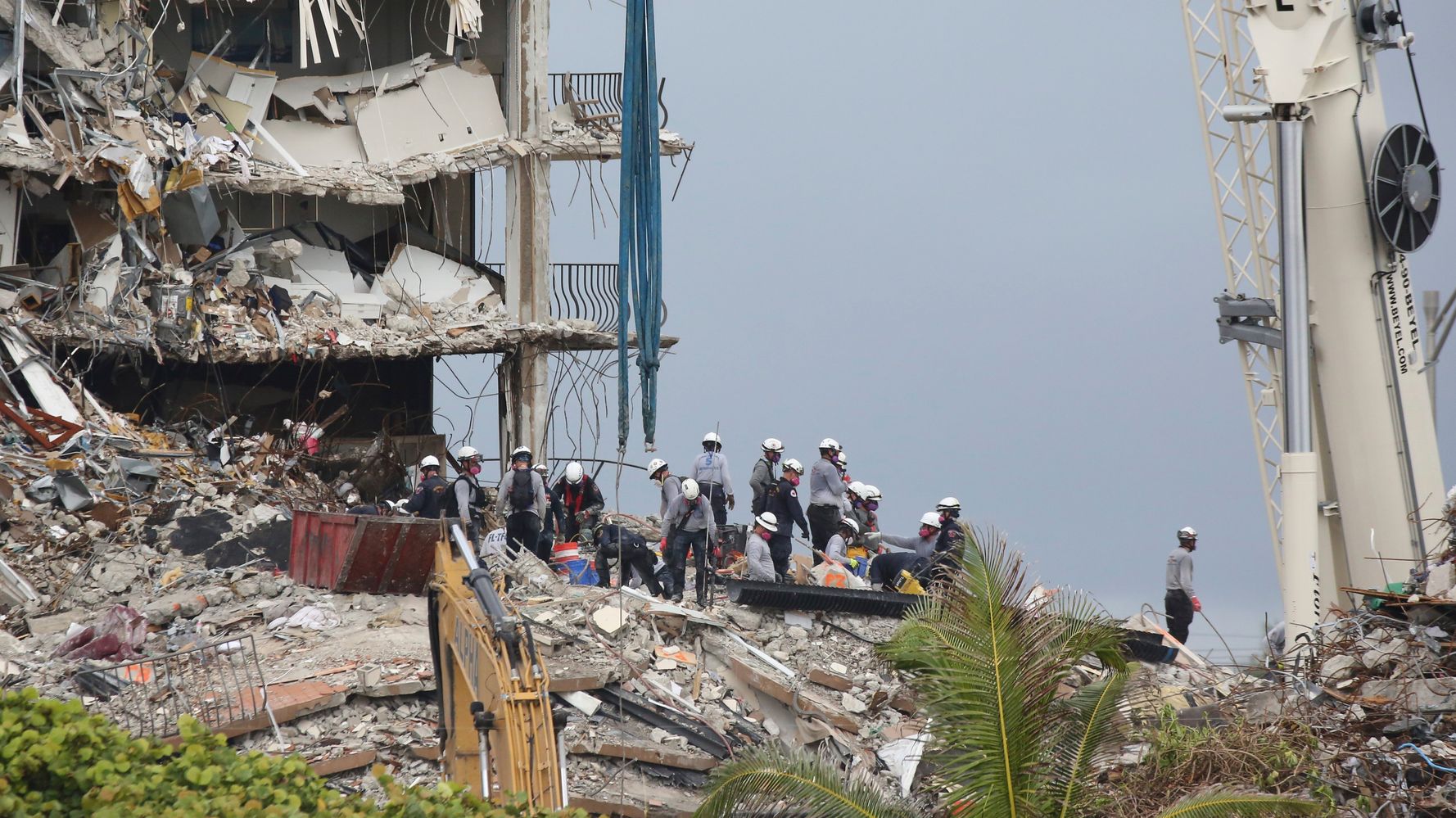 SURFSIDE, Fla. (AP) â€” Rescue efforts at the site of a partially collapsed Florida condominium building were halted Thursday out of concern about the stability of the remaining structure, officials said.

Search crews that have been atop the pile of rubble for the last week stopped work shortly after 2 a.m., Miami-Dade County Mayor Daniella Levine Cava told a news conference.

The stoppage came on the same day that crews and relatives of those still missing were scheduled to meet with President Joe Biden in a visit that many hoped would provide some measure of comfort to a devastated community.

Crews noticed several expansions in cracks they had been monitoring, including 6 to 12 inches of movement in a large column hanging from the structure â€œthat could fall and cause damage to support columnsâ€ in the underground parking garage, Miami-Dade Fire Rescue Chief Alan Cominsky said.

They also noticed movement in the debris pile and slight movement in some concrete floor slabs â€œthat could cause additional failure of the building,â€ he said.

Officials will work with structural engineers and other experts to â€œdevelop optionsâ€ to continue rescue operations, Cominsky said.

Searchers going through the ruins found the remains of six people Wednesday, bringing the number of confirmed dead to 18. The number of residents unaccounted for stands at 145.

Miami-Dade Police Director Freddy Ramirez said he hopes Bidenâ€™s visit will be a morale booster for the entire community.

â€œWeâ€™ve had several challenges from weather, sorrow, pain. And I think that the president coming will bring some unity here for our community, support, like our governor, our mayor, all of us together,â€ he said.

Concerns remained that the still standing portion of the complex could also collapse and work at the site appeared to have paused early Thursday. During a meeting with families Wednesday, Miami-Dade Fire Rescue Assistant Chief Raide Jadallah said officials are concerned about the stability of that portion of the building.

â€œWhat we know is that the columns on the east side of the building are kind of, of concern, not compromised, but just right now of concern,â€ Jadallah said. â€œHypothetically, worst-case scenario: If these columns are truly really bad, we are worried they could collapse right back into the parking garage.â€

Families were asking if they could add tensions rods but he said structural engineers say that is not possible.

Psaki said the president and first lady also want to make sure that state and local officials have the resources and support they need under an emergency declaration approved by Biden for Miami-Dade. She emphasized Wednesday that the White House is being careful to coordinate with officials on the ground to ensure that Bidenâ€™s visit doesnâ€™t do anything to â€œpull awayâ€ from the ongoing search and rescue effort.

State Fire Marshal Jimmy Patronis said he hopes to emphasize to Biden that there is a need for mental health resources to treat rescue workers for post-traumatic stress disorder.

â€œThese guys are so blindly focused on the mission of saving lives, and unfortunately they see things they canâ€™t unsee,â€ Patronis said.

â€œWe want to make sure that when they ultimately do go home, that weâ€™re giving them the strength â€¦ to be able to get back to work without fear of nightmares and challenges.â€

Since the tragedy, Gov. Ron DeSantis, a Republican, and Miami-Dade County Mayor Daniella Levine Cava, a Democrat, have projected a united and cooperative front as they respond to the crisis.

Previously, they had sometimes sparred over how best to respond to the coronavirus outbreak, with clashes over wearing masks and other measures to control the pandemic. But no signs of partisanship have been evident in Surfside.

DeSantis has spoken appreciatively of the aid coming from Washington, even commending the Biden administration for â€œstepping up to the plate.â€

â€œWe really appreciate having the support of the president,â€ DeSantis said at a Friday news conference in Surfside â€• although hours before, he had blasted President Joe Bidenâ€™s border policies during an earlier press conference in the stateâ€™s Panhandle.

DeSantis, who is up for reelection next year, is said to be exploring a run for the presidency in 2024.

Among the remains found Wednesday were those of a mother and her two daughters, ages 4 and 10, a loss that Cava called â€œtoo great to bear.â€

Miami-Dade police identified the children as 10-year-old Lucia Guara and 4-year-old Emma Guara, and their mother as 42-year-old Anaely Rodriguez. The remains of their father, Marcus Guara, 52, were pulled from the rubble Saturday and identified Monday.

The cause of the collapse is under investigation. A 2018 engineering report found that the buildingâ€™s ground-floor pool deck was resting on a concrete slab that had â€œmajor structural damageâ€ and needed extensive repairs. The report also found â€œabundant crackingâ€ of concrete columns, beams and walls in the parking garage.

Just two months before the building came down, the president of its board wrote a letter to residents saying that structural problems identified in the 2018 inspection had â€œgotten significantly worseâ€ and that major repairs would cost at least $15.5 million. With bids for the work still pending, the building suddenly collapsed last Thursday.