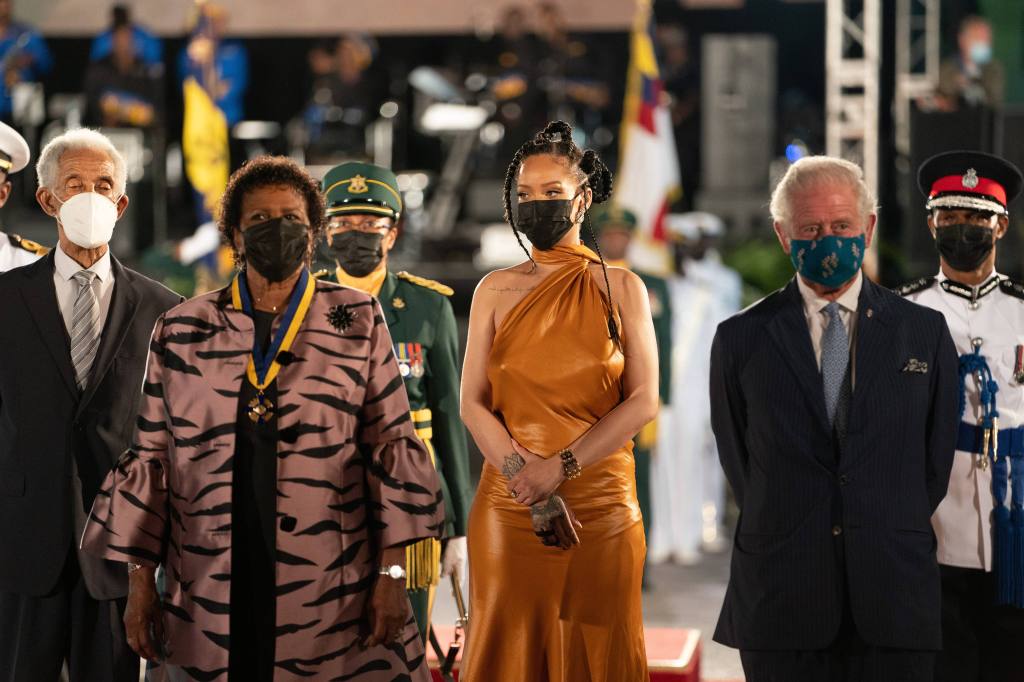 Rihanna can add â€œnational heroâ€ to her long list of achievements.

During Barbadosâ€™ first presidential inauguration on Tuesday, which comes as the country ended nearly 400 years of British monarchyâ€™s reign, the singer-turned-entrepreneur was honored by the countryâ€™s Prime Minister Mia Mottley.

â€œOn behalf of a grateful nation, but an even prouder people, we therefore present to you the designee for national hero of Barbados, Ambassador Robyn Rihanna Fenty,â€ Mottley said.

â€œMay you continue to shine like a diamond and bring honor to your nation by your works, by your actions and to do credit wherever you shall go,â€ she continued, referencing Rihannaâ€™s famous 2012 hit song â€œDiamonds.â€

Rihanna (nÃ©e Robyn Rihanna Fenty) has served as an ambassador for Barbados since 2018. She was born in Saint Michael and raised in Bridgetown, Barbados.

For the event, the artist wore a brown leather halter dress from the Bottega Veneta fall 2021 ready-to-wear collection and jewelry by Briony Raymond.

The event marked the country transitioning to a republic after removing Queen Elizabeth II as its head of state, a move announced in September. Dame Sandra Mason was elected by parliament as the first president of Barbados last month.

Prince Charles, heir to the British throne, also attended the inauguration to represent the royal family, where he denounced â€œthe atrocity of slavery.â€

â€œIâ€™m so deeply touched that you should have invited me to return to Barbados and to join you on behalf of the queen at this moment of such significance for your remarkable nation,â€ the prince said. â€œThe creation of this republic offers a new beginning, but it also marks a point on a continuum. A milestone on the long road you have not only traveled, but which you have built from the darkest days of our past and the appalling atrocity of slavery which forever stains our history.â€

Barbados will remain part of the Commonwealth, a voluntary association of 54 countries, most of which were former British colonies.