RNC challenger not ready to concede to McDaniel 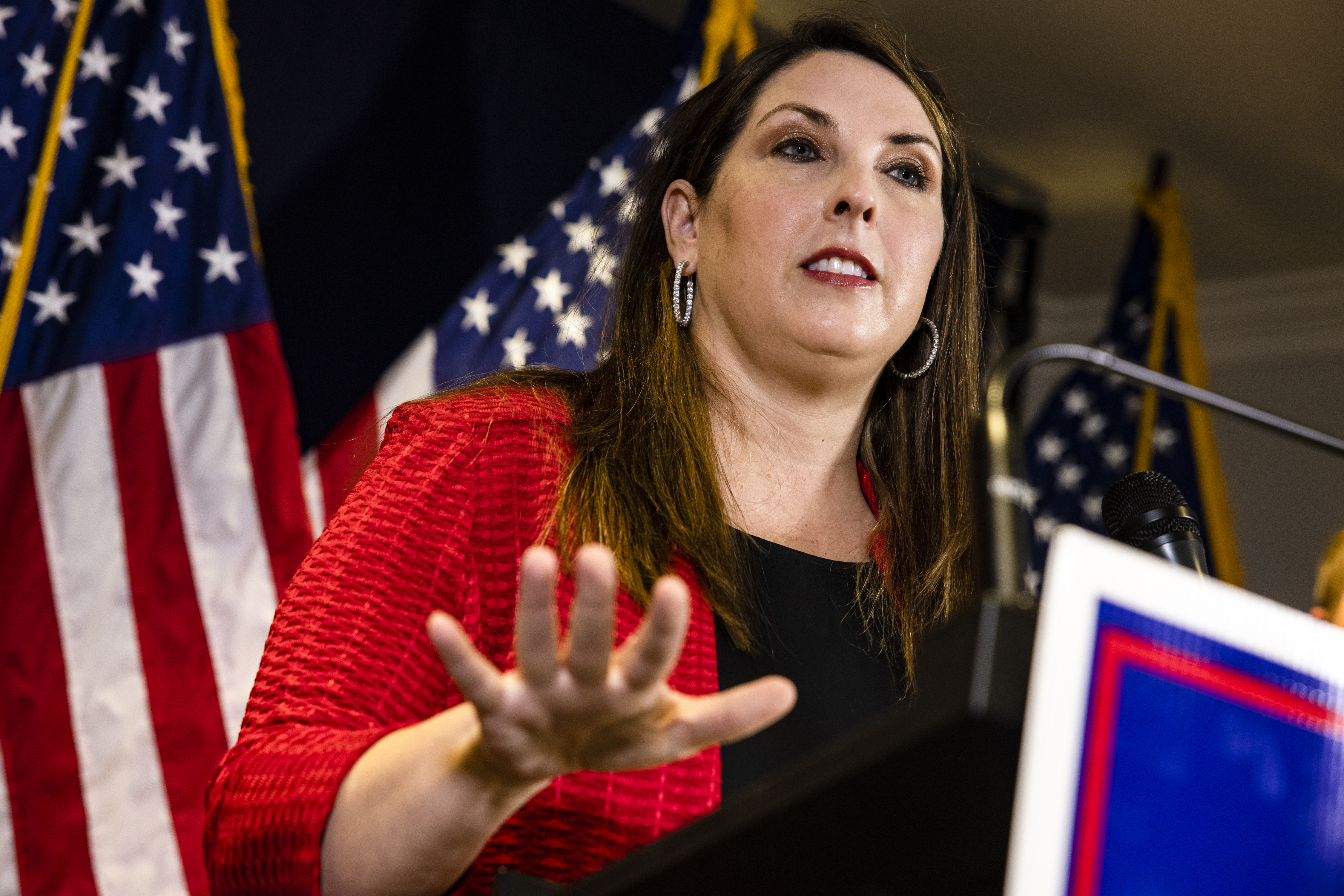 But to the dogged team whipping votes for Harmeet Dhillon, the California national committee member taking on McDaniel, the congenial environment is all the more reason to keep making their case. Parading around the hotel its high-profile surrogates, former Arizona gubernatorial candidate Kari Lake and country artist John Rich, the Dhillon camp set them up with members they thought might still be persuadable that the RNC needs change.

As one GOP operative attending the meeting put it, RNC members have “historically backstabbed each other” on secret ballots, citing past races for lower leadership positions where candidates found out the hard way they didn’t have the votes that they were promised.

Oscar Brock, the national committee member from Tennessee and a member of Dhillon’s whip team, worked committee colleagues from the lobby of the resort Wednesday evening, keeping a mental list of potentially undecided members to speak with. By his count, as many as 30 members remain on the fence in a race where the winner will need a majority — at least 85 of the 168.

Caroline Wren, a Republican strategist running Dhillon’s chair campaign, said Wednesday night that Dhillon “needs to sway at least 12 more people,” but noted she had well over a day to do so and had just given an “incredibly moving speech” about her immigrant background to members in a closed-door candidate forum that evening.

Roger Villere, the national committee member from Louisiana, told POLITICO he spoke with three members Wednesday who had changed their vote to Dhillon, but did not specify who.

“I think Ronna still has the edge, but Harmeet is still in the fight,” Brock said with a smile. “There are the saints, the sinners and the savable.”

But despite Dhillon allies saying a handful of undecided members have come over to their side since arriving at the luxury resort, there have been no obvious signs of mass movement toward the San Francisco attorney — the kind of momentum she needs after listing just 30 member endorsements, compared to more than 100 by McDaniel.

On Wednesday, McDaniel’s team announced two more members publicly backing her, the state party chairs from Wisconsin and Vermont, who had not previously weighed in on the race. It came hours after Dhillon’s team had shown up in force during an evening happy hour in the hotel lobby.

Next to windows overlooking the Pacific Ocean, Dhillon and a dozen or so supporters Tuesday night greeted fellow members gathered at the hotel bar before business officially kicked off.

Among those being lobbied was Paul Dame, the Vermont GOP chair who said he had kept an open mind about the race the past two months and held off on committing his vote until Wednesday morning.

Dame released a statement endorsing McDaniel, criticizing Dhillon’s aggressive campaign tactics that disparage the party and its current officials in the process. In an interview, Dame said he reached the conclusion after one tweet too many by Dhillon going after the RNC establishment — a tactic she and her allies have defended as a necessary part of campaigning against the incumbent.

“She has kind of set up her campaign around the idea that ‘the RNC is corrupt, and it’s going to stay corrupt unless you put me in to fix it,’” Dame said. “And I think that puts us in a really tough spot, and it’s created an unnecessary division.”

While Dame had originally planned to keep quiet about his vote, he decided to type up a lengthy statement explaining his decision. Dame said he knows he’ll have to talk through his vote and confidence in McDaniel’s abilities with grassroots activists in his state who have been energized by Dhillon’s bid, and who believe Dhillon is on track to oust McDaniel this week.

“I really felt like there needed to be a voice out there making the case for Ronna, to prepare people who could otherwise get upset on Friday if it’s a sudden shock,” Dame said.

During her speech at the member forum Wednesday night, Dhillon directly addressed the criticism that she has disparaged fellow Republicans and used divisive rhetoric. She responded to an email sent to all members this week by McDaniel supporter Jeff Kaufmann, the Iowa GOP chair, which highlighted examples of Dhillon’s public comments about RNC members having “contempt for the grassroots” and members working “very little” in between RNC gatherings.

“When I look at what I seem to have been characterized as saying, it looks like I’m a horrible person,” Dhillon said, according to a person in the room. “From the bottom of my heart, just as we don’t like the liberal national news media mischaracterizing what we say, let’s be fair to one another as well, and understand that … if you just put half the answer, you may get a distorted view of what I feel.”

The only public “debate” in the race for chair was held Wednesday afternoon and featured just one of the three candidates — My Pillow CEO Mike Lindell, another challenger who has just one publicly declared supporter. Dhillon sent a surrogate, political strategist and fundraiser Caroline Wren, who is advising her campaign for chair. Wren said Dhillon was unable to make the debate due to committee meetings she had to attend that afternoon.

A name tag for McDaniel remained in front of an empty seat as both Lindell and Wren tag-teamed to criticize her performance as party chair. McDaniel previously said she would not take part in rogue debating, explaining she was already participating in the RNC’s members-only candidate forum being held Wednesday evening at the Waldorf.

The livestreamed public forum, organized by conservative radio host John Fredericks, a McDaniel detractor, was held at a budget hotel 2 1/2 miles down the road from the RNC resort. Grassroots activists packed the small rented meeting room, where Virginia national committee member Rich Anderson, who says he has not decided how he will vote, moderated the forum.

Other signs of McDaniel’s continued grip on the RNC are evident at the retreat. High-profile Republicans who have endorsed her reelection bid, including former Trump White House adviser Kellyanne Conway and Family Research Council President Tony Perkins, were tapped to headline a members lunch and dinner Thursday.

And while Dhillon’s team distributed tote bags with her campaign signs and continued to press members for support, McDaniel’s campaign team has taken a more subtle approach at the meeting, though it had surrogates on hand for support like Reince Priebus, a former RNC chair and Trump White House chief of staff, as well as former Georgia lawmaker Vernon Jones.

Both Dhillon and McDaniel are set to hold late-night informational receptions for members ahead of Friday’s vote.

Rachael Bade contributed to this report.