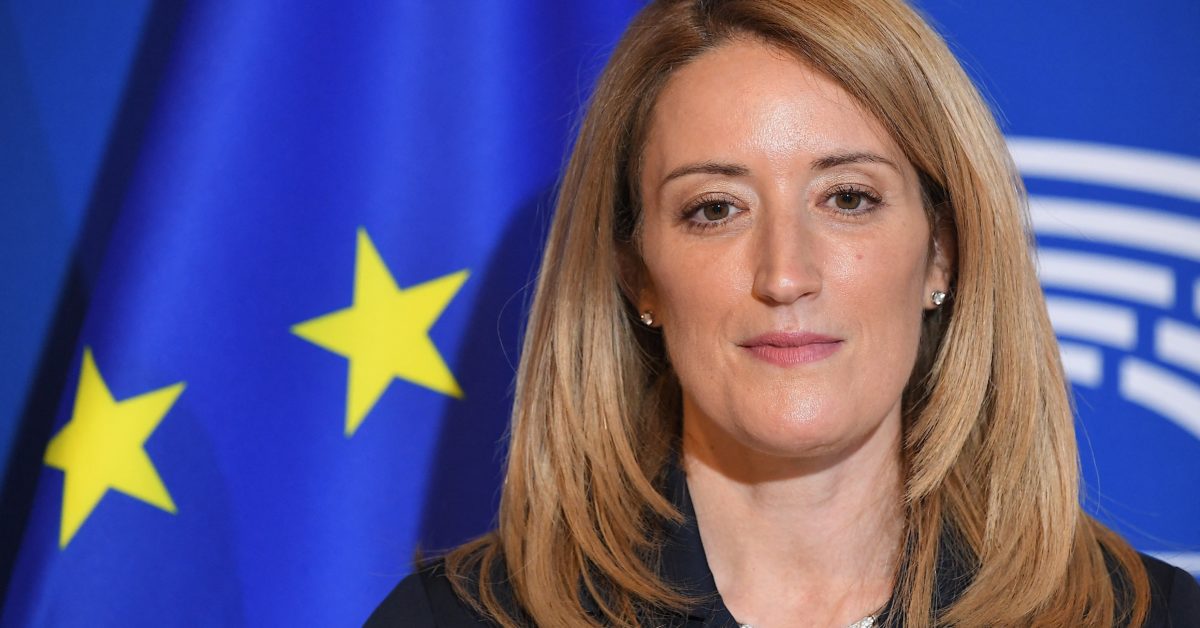 Roberta Metsola will surge to the European Parliament presidency on Tuesday, capping off a campaign where she pitched herself as a young, experienced female leader who can inspire and build consensus across Europeâ€™s fractious political divides.Â

Yet it took until the final moments for the 42-year-old Maltese politician to guarantee she would be elected, as a cohort of socialist MEPs continued to express fears their newly gained power in Europe would not be fairly represented under Metsola and that her more conservative record on abortion was out of step with the Continentâ€™s political direction.

Ultimately, the path cleared Monday afternoon after the socialists were promised a slate of prominent positions in return for backing Metsola.

The deal cements Metsolaâ€™s rise through Parliament, where she is already a well-known name as first vice-president and the bodyâ€™s interim leader since the sudden death last week of former President David Sassoli. Her ascent was buoyed by strong backing from the Parliamentâ€™s large center-right and conservative contingency, as well as from many centrists.

â€œMetsola is the only serious contender for the post,â€ one senior Parliament official said. â€œShe is seen as a â€˜safe pair of hands.â€™â€

The result is that Metsola will take control of the EUâ€™s legislative body for two and a half years at a delicate moment â€” vaulted into the presidency by the large conservative bloc but facing increasingly empowered socialist and center-left groups as Parliament heads toward the 2024 elections. Taking over in the wake of the well-liked Sassoliâ€™s passing will also present its own challenges.Â

Sheâ€™ll be navigating these dynamics as the Parliament tackles some of its most contentious issues: Slashing carbon emissions, digitizing the economy, bolstering the blocâ€™s military and toughening the EUâ€™s rule-of-law compliance.

â€œThe next two and a half years will be amongst the most critical for the European Parliament as we emerge from a devastating pandemic,â€ Metsola told journalists in November after the center-right European Peopleâ€™s Party (EPP) group, the Parliamentâ€™s largest, tapped her as its candidate. â€œIt will fall onto the constructive forces of this house to plug the holes in our foundations.â€

Getting to the election

S&D leaders agreed to back Metsola in return for a commitment on political priorities with the EPP and Renew Europe. The S&D was also assured five of the Parliamentâ€™s 14 vice-president slots, as well as the head of the Conference of Committee Chairs, a key position traditionally held by the EPP that coordinates work across the Parliamentâ€™s various panels.

Still, Metsola, a former civil servant who built most of her political career in Brussels, is not running unopposed.

Renew Europe opted against backing its own candidate. The groupâ€™s pro-European MEPs are instead expected to support Metsola.Â

Since announcing her decision to run, Metsola â€” a former lawyer and graduate of the College of Europe â€” has endlessly made the rounds, trying to convince other groups she would strengthen the Parliamentâ€™s pro-European centrist majority.

Her goal, she said in November, is to â€œhelp get people in our member states to believe in Europe.â€ And her approach, she added, â€œis to create alliances, to build bridges with constructive pro-European forces in this house.â€

Metsola has become one of the assemblyâ€™s most influential female MEPs since being elected in 2013 â€” serving in the EPPâ€™s Bureau, which helps prepare for plenary sessions, and eventually as the Parliamentâ€™s first vice-president.Â She will be the third woman to head the Parliament and the first Maltese to serve as one of the EUâ€™s three presidents.

For the EPP, Metsola is a reliable vote, backing her groupâ€™s stance just over 90 percent of the time in the current legislative term. But she has also worked across ideological camps on a number of issues, from migration to corruption to LGBTQ+ rights.Â

One Renew Europe official called Metsola â€œrather impressiveâ€ on numerous EU files during a recent campaign hearing in the group.

In addition to her legislative work, the EPP has marketed Metsola as a mother seeped in political activism. It funded a documentary called â€œThe First Viceâ€ that features her cooking chicken for her four young boys, while her Finnish husband, Ukko, recalls dealing with his wifeâ€™s absence when she first campaigned to become an MEP.

Metsola also has a deep history within the Brussels bubble, working as a legal attachÃ© at the Maltese EU office from 2004 to 2012 after serving as a legal adviser to Catherine Ashton, the EUâ€™s former top diplomat.

The points of contention

One place where Metsola has struggled to build brides is abortion.Â

In Malta, an overwhelmingly Catholic nation, abortion is still illegal â€” the only EU country where that remains the case â€”Â and the population widely supports the ban.Â

In Brussels, Metsola has opposed several reports and resolutions calling for women to have access to safe abortion services and condemning legislative moves to restrict such access. In 2015, she even issued a statement saying that the EPP remained â€œcategorically against abortion.â€

This past July, she defended her stance after voting against a report defining abortion as a human right. â€œWithout the approval of our national parliament, the EU institutions cannot impose any legislation on Malta in this area,â€ Metsola told the Maltese website Lovin Malta.

Her comments caused outrage among many center-left MEPs who have fought to preserve abortion rights across the EU.Â

â€œWhile several member states in the EU are currently putting our fundamental values into question, any candidate for the Parliament presidency must not leave room for doubt when it comes to his or her stance on womenâ€™s and human rights,â€ said Evelyn Regner, an Austrian Socialist MEP who chairs the Parliamentâ€™s Committee on Womenâ€™s Rights and Gender Equality.Â

Metsolaâ€™s voting record on abortion and womenâ€™s health, Regner said, â€œwent against the clear majority of MEPs in this house.â€Â

That canâ€™t be the case for the president, she argued: â€œThe stance of the European Parliament leadership needs to remain clear: Denying access to health care, of which abortions are a part, is a human rights violation.â€

One official close to Metsola disputed the allegation. Metsola, the official said, â€œhas made clear in all her campaign hearings that she would represent the majorityâ€ on womenâ€™s rights, setting aside her personal views.Â

In those hearings, Metsola also pointed to a clause negotiated ahead of Maltaâ€™s 2004 entrance into the EU, which stated EU law would not change Maltaâ€™s abortion laws.Â

Aside from abortion, Metsolaâ€™s colleagues expressed respect for her work on other thorny issues.

Some pointed to migration. As the former EPP coordinator on the subject and a member of the Parliamentâ€™s powerful civil liberties, justice and home affairs (LIBE) committee, Metsola pushed for migrant relocation within the bloc â€” a subject important to Malta, a Mediterranean island nation. The stance was at odds with some of the EPPâ€™s more conservative members, like French MEP FranÃ§ois-Xavier Bellamy, who called relocation â€œa nonsensical idea.â€

In 2016, amid a migrant surge from Syria, Metsola drafted a report calling for the EU to take a â€œholistic approachâ€ to the issue. In the five years since, however, the bloc has failed repeatedly to strike any sort of larger deal on processing and relocating migrants.Â A new pact on migration and asylum is now under examination.

â€œI can recall that resolution and that so-called â€˜holisticâ€™ approach because it has become some kind of mantra whenever we insist on the need for a comprehensive and global approach to migration policies,â€ he said. â€œRoberta is eloquent, experienced and sheâ€™s got all the assets for the job.â€

Later, Metsola helped oversee Parliamentâ€™s work to both expand Frontex, the EUâ€™s border agency, and then investigate the agency when it was accused of illegally turning away migrants at the blocâ€™s border.Â

The other Malta connection

Back in Malta, Metsola has also earned recognition for her outspoken criticism of the socialist government in the wake of journalist Daphne Caruana Galiziaâ€™s death in 2017. Galizia was killed by a car bomb as she was investigating rampant corruption that reached the highest echelons of Maltaâ€™s government.Â

â€œRoberta was one of a handful of Maltese politicians who I instinctively knew I could trust after my motherâ€™s assassination,â€ said Andrew Caruana Galizia, Caruana Galiziaâ€™s son and the acting deputy head of Europe and Eurasia at the World Economic Forum.Â

â€œShe continued to campaign for justice for my mother and for accountability for the corruption she uncovered,â€ he added, â€œdespite attempts by her own party leader at the time to stop her talking about my motherâ€™s case.â€

Her firm stance caught even broader attention in 2019, when a photo of her refusing to shake Maltese Prime Minister Joseph Muscatâ€™s hand went viral.

â€œGet out now, before you do irreparable damage to the country,â€ she tweeted at the time.

Some in Malta saw her corruption crusading as a bit selective. One Maltese politician noted that Metsola voted against a Parliament report illustrating rule-of-law deficiencies in Slovenia and argued she â€œtook a mild stanceâ€ when corruption accusations arose against the Bulgarian government of Boyko Borissov.Â

â€œShe was very vocal when it came to the rule of law in Malta and itâ€™s a good thing,â€ the politician said. â€œHowever, you should be doing the same with other countries.â€