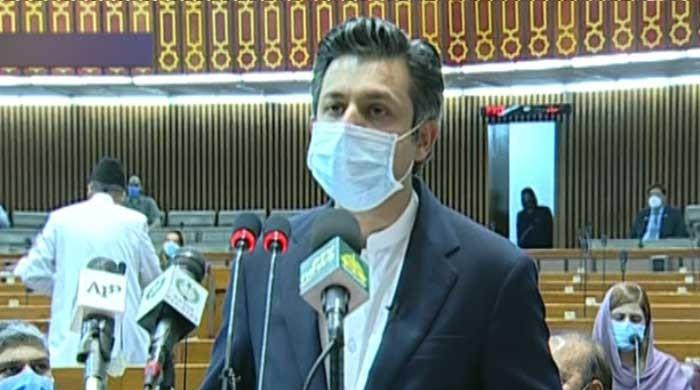 ISLAMABAD: Federal Minister of Industries and Production Hammad Azhar presented the budget 2020-21 on Friday amid protest from the opposition members.

Taking the floor in an (initially) quiet lower house, Azhar began his speech comfortably enough, but was soon challenged by the opposition’s jeering as he got into the particulars of the government’s plans for next year.

At the outset, the federal minister said that the government’s top two priorities have been battling corruption, ensuring accountability, transparency in state institutions and merit-based decision making at every level.

“Our main aim was to revive the economy and stabilize and strengthen the Islamic Republic of Pakistan as we realise the vision and aspirations of our founding fathers,” he said.

“The Pakistan Tehreek-i-Insaf is pushing ahead with its goals to provide social justice, uplift the vulnerable sections of society and working for the poor and destitute sections of this country. This is our vision and guiding principle,” he added.

Azhar proceeded to provide a snapshot of the state of the economy when the PTI took the reins of power.

When the PTI took over in 2018, national debt had doubled to Rs31 trillion and the country could not keep up with interest payments, he recalled.

The current account deficit (which shows how much money is leaving the country) had reached $20 billion, while the trade deficit (the difference between imports and exports) had reached $32 billion.

“The rupee was kept at an unrealistic and artificially high level, which led to a decline in exports and an increase in imports,” he said.

“The reserves of the State Bank of Pakistan had declined from $18bn to $10bn due to the failed policies of the past, due to which the country was on the brink of default,” he said, noting that the budget deficit had reached Rs2.3tr.

The size of Public Sector Development Programme (PSDP) for 2020-21 is Rs 1,324 billion. Out of this, Rs 676 billion has been allocated to provinces.

Federal PSDP has been estimated at Rs650 billion, out of which Rs418.7 billion are for Federal Ministries/Divisions, Rs 100.4 billion for Corporations, Rs3 billion for Earthquake Reconstruction and Rehabilitation Authority (ERRA), and Rs70 billion for COVID responsive and Other Natural Calamities Program

The minister said Pakistan had been placed on the FATF grey list due to the absence of concrete policies to keep terror financing and money laundering in check.

As the minister spoke, the opposition MNAs started waving protest banners in the parliament and shouted slogans against the government.

Azhar said that the government had been successful in implementing policies to reverse the decline during the first nine months of the outgoing fiscal year, before COVID-19 proved to be a major setback for the country’s economy.

Azhar said that the current account deficit was slashed by 73% in that period, while trade deficit had been successfully reduced by 31% from $21bn to $15bn and the fiscal deficit was brought down to 3.8% from 5% due to the incumbent government’s policies.

The minister said that, for the first time in 10 years, the government ran a primary surplus of 0.4% of GDP.

The minister also claimed success in tax collection, saying the Federal Board of Revenue had increased collection by 17% in the first nine months of the year and “was on track to achieve a big target of Rs4.8 trillion [tax collection].”Â

“We should consider that, due to debts taken in the past, we have had to pay Rs5tr in interest in our two years in power,” he pointed out.

The minister said that the PTI government had increased employment opportunities for Pakistanis abroad, which led to remittances increasing to $17bn in the first nine months of the year.

Azhar said that the incumbent government had also introduced structural reforms in state institutions. He said that a dedicated government task force has presented its report in which eight defunct organisations have been highlighted and 33 will be merged with others.

Touching upon the government’s efforts in light of the COVID-19 pandemic, the minister said that the Centre is taking steps to ensure people’s lives are saved and economic activities go on.

“The coronavirus pandemic caused our GDP to shrink by Rs3,300bn,” he said, adding that the non-tax revenue declined by Rs102bn, adding to the country’s poverty and unemployment woes.

He said that to mitigate the damage done to various sectors by the coronavirus pandemic, the government provided Rs75bn for the health sector, Rs150bn was allocated for poor families and construction of Panah Gahs as well as Rs200bn for daily wage workers hit by the pandemic.

The minister noted that the government had provided relief worth Rs100bn in the form of electricity and gas bills whereas Short and Medium Enterprises were provided relief amounting to Rs50bn.

Azhar said that the prices of petrol and diesel were slashed by Rs32 per litre and Rs45 per litre. He said that the government had done away with the Fixed Tax Regime and provided WHT relief for the construction sector, all the while making the sector into an industry.

Budget for next year

Azhar said that the government had put the inflation target at 6.5% and said that the Foreign Direct Investment will be increased by 25%. He said that Rs1,324bn had been set aside for the development budget while the PSDP had been provided Rs650bn.

The minister said that it had been decided to increase the welfare fund for the country’s artists to Rs1bn.

“Now, I would like to go into the second part of my speech that concerns taxes,” he said. “The tax to GDP ratio is 11%, which is less than what it has been in the past 20 years,” he added.

The minister said that the PTI government deserves credit for not imposing any new taxes on the people. Delving into the achievements of the government, he said that authorities had brought 6,616 retail outlets into the tax net which increased the limited tax base.

Azhar disclosed that POS sales tax had been reduced to 12% and the minimum tax for hotels had been set at 0.5% from April to September. He said that the government had noted a 27% increase in domestic taxes and in order to bring down the current account deficit, unnecessary imports had been scrapped.

The minister said that rebate schemes had been revised after a decade while the government had, in a bid to boost business activities, exempted raw materials from custom duty.

Azhar said that authorities had proposed increasing the tax rate on double cabin vehicles, which were luxury items.

He said that the government, to make it easy for transactions to take place, has put in place the rule that a person does not need to show his/her NIC at a transaction not exceeding Rs100,000.

He said that cancer diagnostic kits from custom duty and diet as well as supplementary food and ingredients have been exempted from duties and taxes.

Azhar said that in order to encourage tax filing, the government had decided to revise the 11th schedule. He said that tax on cigarettes, batteries, cigars had been increased from 25% to 100%.

He said that the federal excise duty on energy drinks had been increased from 13% to 25%. The minister said that the government has proposed reducing sales tax on mobile phones that are manufactured in Pakistan.