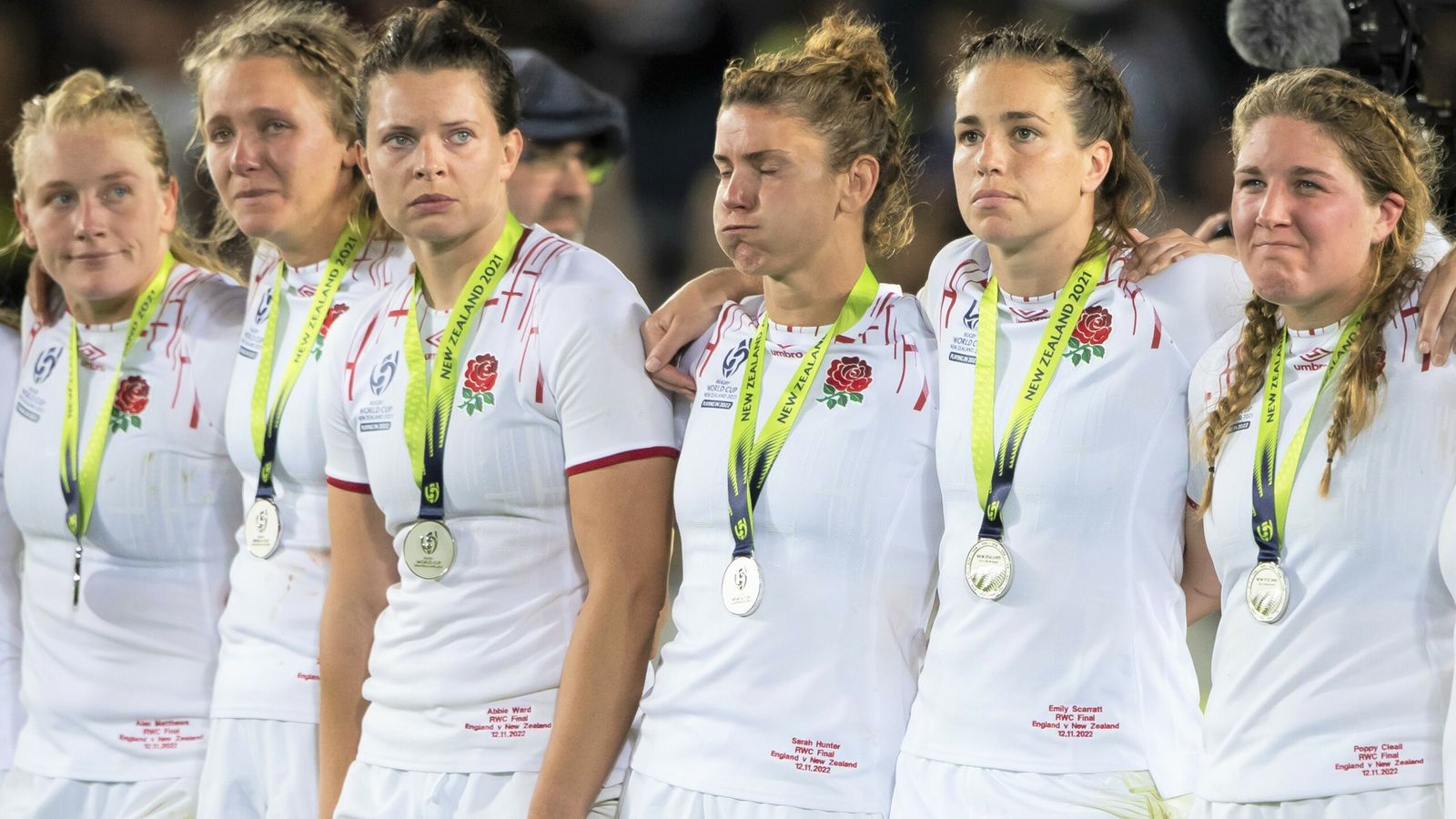 New Zealand win 34-31 to claim the Rugby World Cup for a sixth time and end England’s 30-match winning streak; Lydia Thompson sent off for the Red Roses during the first half of an incredible final in Auckland

Former England international Vicky Fleetwood says that England would have ‘absolutely’ won the Rugby World Cup final if Lydia Thompson had not been shown a red card.

Former England international Vicky Fleetwood says that England would have ‘absolutely’ won the Rugby World Cup final if Lydia Thompson had not been shown a red card.

England captain Sarah Hunter believes the Red Roses can be proud of their World Cup performance and insists Lydia Thompson’s red card cannot be solely blamed for their “cruel” defeat to New Zealand in the final.

The Red Roses saw their 30-match winning streak ended in an epic contest against the tournament hosts and defending champions, as they were beaten 34-31 in front of a sell-out crowd at Eden Park.

England spent more than an hour with 14 players after Thompson was sent off for a reckless tackle, although Simon Middleton’s side led for large spells before being beaten by the Black Ferns in a World Cup final for a fifth time.

2003 Rugby World Cup winner Will Greenwood says the Rugby World Cup ‘has transcended an 80-minute game’ and believes the Red Roses will sell Twickenham out in the next few years.

2003 Rugby World Cup winner Will Greenwood says the Rugby World Cup ‘has transcended an 80-minute game’ and believes the Red Roses will sell Twickenham out in the next few years.

“I’m gutted,” Hunter said. “I’m so proud of the team, we came out fighting. We had our backs against the wall for 60 minutes but we never gave up.

“One result doesn’t define the squad that we are, the people we are. Hopefully we have inspired the next generation back home and given themselves something to be proud of.

“Sport is cruel. Credit to New Zealand, they found a way and they go home as deserved champions. We left no stone unturned, we left everything on the pitch. We are hurting.”

How did the red card impact England?

England made the dream start and were 14-0 ahead after early tries from Ellie Kildunne and Amy Cokayne, only for New Zealand to be gifted a way back into the game in the 18th minute with Thompson’s dismissal.

“It [the red card] didn’t help,” Middleton admitted. “It definitely affected how the game was played. You look at the points they scored immediately down the side – it’s difficult to defend. We had to adapt but when you’ve got 14 and cover one area then it weakens you in another.

“Good teams find you out and they found us out a little bit, so it made a tough game a whole lot tougher, but we took it down to the last play and the game was in the balance when the hooter had gone.

“You cannot overstate how proud I am and the rest of the staff are of the players and how proud of they should be of themselves. To get that close, with so many challenges that went on through the game, was immense and it shows what the squad is all about.”

Former England international Vicky Fleetwood says that England’s players will be heart-broken by their defeat in the World Cup final.

Former England international Vicky Fleetwood says that England’s players will be heart-broken by their defeat in the World Cup final.

The Red Roses battled valiantly and held a narrow two-point advantage until Ayesha Leti-I’iga scored the winning try nine minutes from time, with Hunter adamant that Thompson has the full backing of her England teammates.

“Lydia’s hurting, she’s such a great person, a great player and in moments like this we need to come around her,” Hunter said. “There’s one thing for sure – and that wasn’t the reason we lost the game.

“We are a team that is as one and we won’t point any fingers or identify a single person on the end result. We’ve got her back, we’ll look after her, we’ll put an arm around her and make sure she’s alright.

“In games, people get sent-off and teams still win. I don’t think it necessarily defined the outcome. It makes it harder, but it’s not the sole reason why we were not on the end of the result we wanted this evening.”

Positives to take for Red Roses?

Middleton said in the build-up to the World Cup that anything less than a win for England would be a disappointment, but the head coach said afterwards he has seen progress from his side during the tournament.

“That’s the overwhelming feeling, how proud I am and we are of the players, Middleton said “They gave absolutely everything. Not just, tonight but for 50, 51 days. They’ve given nothing but their absolute best every single day.”

“In terms of our goals, it is [disappointing not to win]. Talk to any of the players and they’ll say exactly the same. But we won on massive fronts.

“We wanted to leave these shores a better team than we came. We did 100 per cent. We’ve lost tonight but won massively over the last 51 days.”