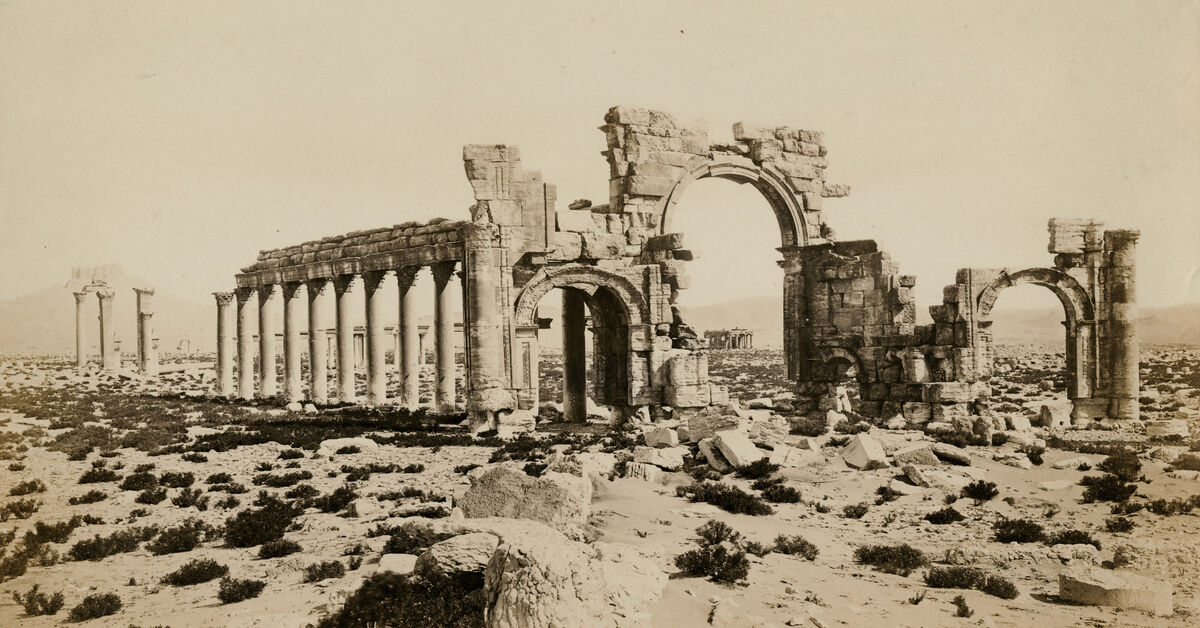 ALEPPO, Syria — Russia continues to promote its restoration of historical sites in Syria. Russia’s ambassador to Syria, Alexander Yefimov, announced his country’s intention to restore the ancient Arch of Triumph that was destroyed by the Islamic State (IS) in the Syrian city of Palmyra, according to a three-dimensional digital model.

In an interview with the Russian state agency TASS Nov. 4, the ambassador said, “The first serious steps have already been taken. For example, in August 2020, Syria was given a three-dimensional model of the ancient city of Palmyra prepared by Russian specialists, and the restoration will be based on that model.”

Yefimov said that this work is being carried out in close coordination with UNESCO and the Department of Antiquities and Museums in Syria.

“We can’t say that there are insurmountable difficulties, but the process itself is tough and requires delicate preparation and high-quality execution throughout all its stages. Objectively speaking, it will take a lot of time,” he explained.

In August 2020, Russia had presented a three-dimensional model of the Palmyra antiquities. The model, which Russian media described as an accomplishment and gift, depicts images of the historical city of Palmyra, including the theater and temple that IS destroyed in 2015.

Russia wants to draw the world’s attention to the destruction of Palmyra, with the aim of bringing in financing for the restoration, according to statements by Russian officials. It has already signed agreements with the Syrian regime to establish its guardianship over the ruins of Palmyra. The director of the Russian State Hermitage Museum, Mikhail Piotrovsky, had signed in November 2019 a memorandum of understanding with the Syrian Museums and Antiquities Authority to restore some historical facilities and artifacts in Palmyra, according to Sputnik.

Natalia Solovyova, deputy director of the Hermitage Museum, said that the model “provides an opportunity to assess new excavation locations and study the area’s planning and reconstruction costs without going to the city itself.” Solovyova’s statement at the time was considered a message to European missions that had refused to visit the region for security reasons. In April 2016, Piotrovsky said that he had handed Vladimir Putin proposals for the reconstruction of Palmyra, and confirmed that he had proposed to UNESCO that Russia join the international campaign to restore the historic city.

In addition, Russian archaeologists plan to restore the Church of St. Helena in Aleppo, and according to the Russian TASS agency, archaeologists at the Petersburg-based Russian Institute of History of Material Culture conducted a complete topography of the Church of St. Helena, one of the oldest Christian churches in the city of Aleppo dating back to the fifth century. The agency noted that Russian scientists will rely on photographs, videos and scientific descriptions of the church to prepare a three-dimensional model that would help in future restoration projects.

In November 2015, IS blew up and destroyed the archaeological Arch of Triumph in Palmyra, when it was controlling the area. The organization also destroyed the temples of Baal Shamin and parts of the Temple of Bel, and the famous Lion of Athena statue at the entrance to the Palmyra City Museum, which dates back to the second half of the first century B.C. and is on the UNESCO list of archaeological sites.

Ayman Nabo, director of the opposition’s Idleb Antiquities Center, told Al-Monitor, “Russian allegations about the restoration of antiquities and historical sites in Syria are propaganda-based and exaggerated to a large extent, as Russia is seeking the most recognition and support from UNESCO, in addition to working on investing in the antiquities’ sector on both the economic and political levels.”

He said, “Russia is lying and has no experience in restoring antiquities. It merely wants to increase its influence and infiltration in Syria and prepare for a long stay through the gateway to antiquities and reconstruction. It wants to steal UNESCO funds through this outlet, and it is also working to open new investments in the city.”

Nabo added, “Most of the missions that were operating in Syria before the outbreak of the Syrian revolution in 2011 were German and French missions, and some Japanese, Belgian and American missions. Russia only had one mission that was working intermittently at the site of Tal Khazneh in Hasakah governorate in northeastern Syria.”

In mid-July, UNESCO published the recommendations of the technical meeting on restoring the antiquities of Palmyra, which brought together 34 international experts from France, Germany, Italy, Japan, Poland, Sri Lanka, Switzerland, Russia, the United Kingdom and the Assad government. Throughout the five years of the regime and Russia’s control, Palmyra city that was in their grip became propaganda material for Moscow, which has used its global fame to promote its victory over IS. The remaining archaeological sites during the past years have become a shrine for Russian forces and their mercenaries, who appear from time to time in photos taken on the city’s stones.

Mohammad al-Sukari, researcher in Syrian affairs, told Al-Monitor, “The restoration of the antiquities sector is part of Russia’s policy in Syria, and this appeared more clearly after the 16th Astana Conference, which touched upon the policy of early recovery. Undoubtedly, in addition to its attempt to focus on reconstruction and refugees, Russia is trying to entrench the safe Syria narrative by focusing on the vital tourism sector, especially in a city like Palmyra, which has a global standing.”

He noted, “These data indicate that Moscow has almost completely monopolized the Syrian file and is seriously searching for a way to revive the Syrian regime through the tourism sector. At the same time, it hopes that this will be an entry point for some countries to reconsider their general policy, especially regarding isolating the Syrian regime internationally and open up to this sector. Thus, the Russian military and political efforts can be translated into a quest to end the isolation of the Syrian regime and perpetuate Russia’s control over the Syrian issue. This might push other parties such as Turkey, Iran and the United States to deal with the issue based on Moscow’s approach.”