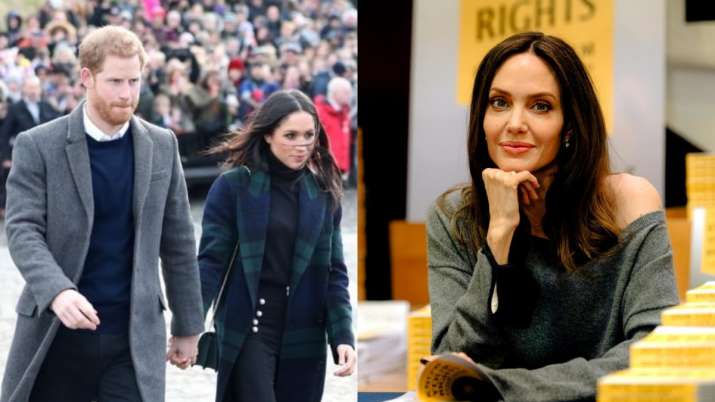 Amid the Russia-Ukraine conflict, the Duke and Duchess of Sussex- Meghan Markle and Prince Harry have come forward to speak out about the crisis. Hollywood superstar Angelina Jolie has also shared a message of prayer for the people who are the victims of the ongoing war.

Angelina Jolie took to her Instagram handle to share a statement on the Russia-Ukraine conflict in her capacity as a special envoy for the UN High Commissioner for Refugees (UNHCR). “Like many of you, I’m praying for the people in Ukraine,” Jolie said in the statement adding, “My focus along with my @refugees colleagues is that everything possible is done to ensure the protection and basic human rights of those displaced, and refugees in the region.”

“We have already seen reports of casualties and people starting to flee their homes to seek safety. It is too soon to know what will happen, but the significance of this moment – for the people of Ukraine, and for the international rule of law – cannot be overstated,” she noted.

The link she shared led to a statement from the UNHCR that reads, “We are gravely concerned about the fast-deteriorating situation and ongoing military action in Ukraine.” “The humanitarian consequences on civilian populations will be devastating. There are no winners in war, but countless lives will be torn apart,’ the statement continued.

Russian President Vladimir Putin ordered the suspension of advancement of its military forces in Ukraine on Friday (local time) but the operation was resumed Saturday afternoon after the Ukrainian leadership refused to talk, said Kremlin spokesman Dmitry Peskov. Earlier, Zelenskyy suggested to Putin that they sit down at the negotiation table amid escalating tensions over Russia’s military actions in Ukraine. Notably, in the early hours on Thursday, Russia launched a special military operation after the recognition of Donetsk and Luhansk. The Western countries have strongly condemned the Russian military operation and boosted the sanctions pressure on Moscow.