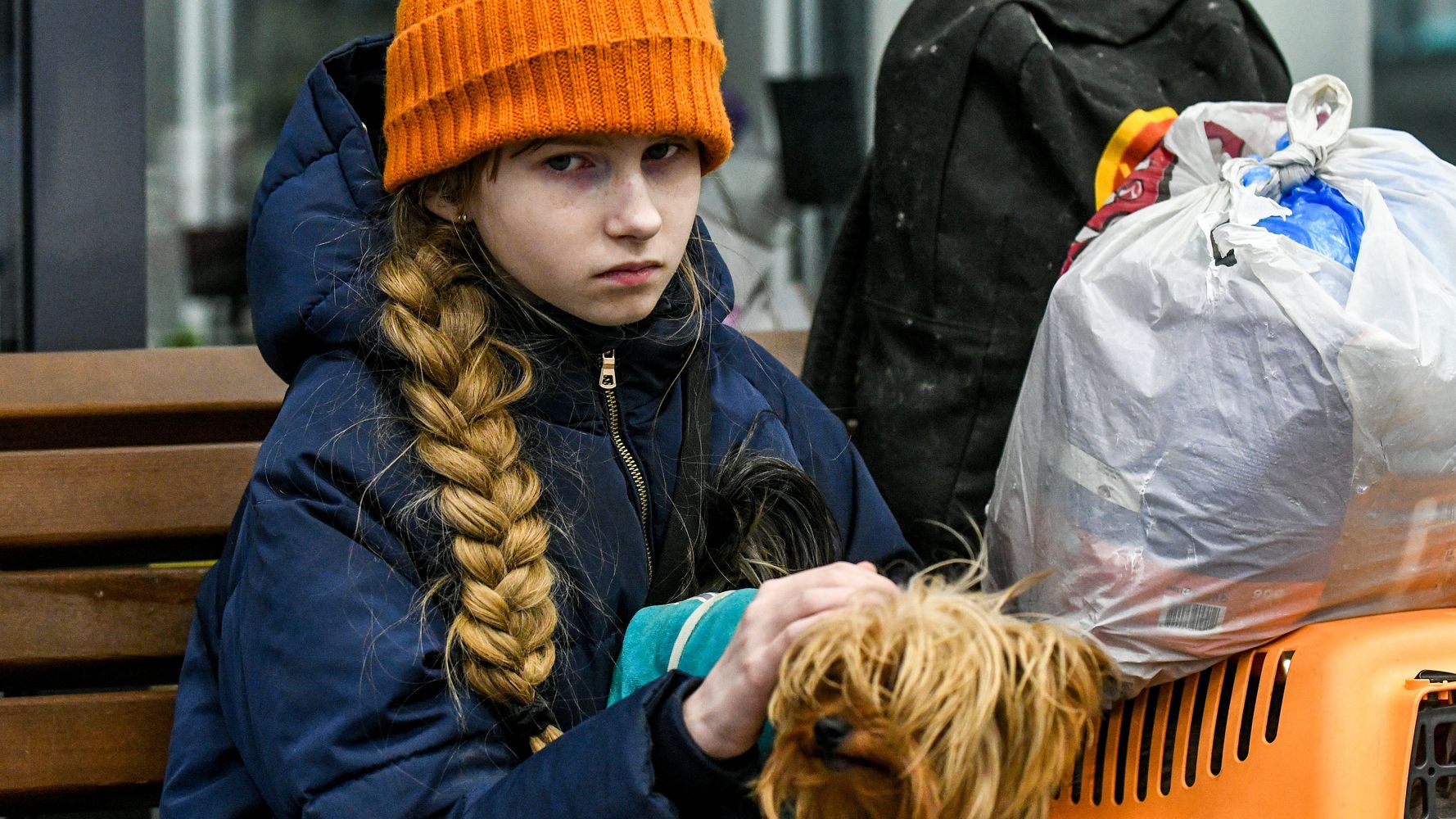 The fall of Mariupol, the scene of some of the warâ€™s worst suffering, would mark a major battlefield advance for the Russians, who are largely bogged down outside major cities more than three weeks into the biggest land invasion in Europe since World War II.

â€œChildren, elderly people are dying. The city is destroyed and it is wiped off the face of the earth,â€ Mariupol police officer Michail Vershnin said from a rubble-strewn street in a video addressed to Western leaders that was authenticated by The Associated Press.

Russian forces have already cut the city off from the Sea of Azov, and its fall would link Crimea, which Russia annexed in 2014, to territories controlled by Moscow-backed separatists in the east. It would mark a rare advance in the face of fierce Ukrainian resistance that has dashed Russiaâ€™s hopes for a quick victory and galvanized the West.

Oleksiy Arestovych, an adviser to Ukraineâ€™s president, said the nearest forces that could assist Mariupolâ€™s defenders were already struggling against â€œthe overwhelming force of the enemyâ€ or at least 100 kilometers (60 miles) away.

â€œThere is currently no military solution to Mariupol,â€ he said late Friday. â€œThat is not only my opinion, that is the opinion of the military.â€

Ukrainian President Volodomir Zelenskyy has remained defiant, appearing in a video early Saturday shot on the streets of the capital, Kyiv, to denounce a huge Friday rally in Moscow that Russian President Vladimir Putin attended.

Zelenskyy said Russia is trying to starve Ukraineâ€™s cities into submission but warned that continuing the invasion would exact a heavy toll on Russia. He also repeated his call for Putin to meet with him to prevent more bloodshed.

â€œThe time has come to restore territorial integrity and justice for Ukraine. Otherwise, Russiaâ€™s costs will be so high that you will not be able to rise again for several generations,â€ he said.

Putin lavished praise on his countryâ€™s military during the rally, which took place on the anniversary of Russiaâ€™s 2014 annexation of Crimea. The event included patriotic songs such as â€œMade in the U.S.S.R.,â€ with its opening line of â€œUkraine and Crimea, Belarus and Moldova, itâ€™s all my country.â€

â€œWe have not had unity like this for a long time,â€ Putin told the cheering crowd.

The rally took place as Russia has faced heavier-than-expected losses on the battlefield and increasingly authoritarian rule at home, where Russian police have detained thousands of antiwar protesters.

Estimates of Russian deaths vary widely, but even conservative figures are in the low thousands. Russia had 64 deaths in five days of fighting during its 2008 war with Georgia. It lost about 15,000 in Afghanistan over 10 years, and more than 11,000 over years of fighting in Chechnya.

Meanwhile, fighting raged on multiple fronts in Ukraine. U.N. bodies have confirmed more than 847 civilian deaths since the war began, though they concede the actual toll is likely much higher. The U.N. says more than 3.3 million people have fled Ukraine as refugees.

Waiting to board a bus at a triage center near the Moldova-Ukraine border on Saturday, a Ukrainian woman named Irina said she decided to leave home in Mykolaiv this week after a loud explosion shook the walls, waking her young daughter.

â€œCan you imagine the fear I had, not for me but for my child?â€ said Irina, who didnâ€™t provide her last name. â€œSo we made decision to arrive here, but I donâ€™t know where we are going, where weâ€™ll stay.â€

The northwestern Kyiv suburbs of Bucha, Hostomel, Irpin and Moshchun were under fire on Saturday, the Kyiv regional administration reported. It said Slavutich, located 165 kilometers (103 miles) north of the capital, was â€œcompletely isolated.â€

Police of the Kyiv region said seven people were killed and five were wounded in a mortar attack on Friday in Makariv, a town roughly 50 kilometers (30 miles) west of the capital. They said the attack destroyed homes and damaged other buildings.

Ukrainian and Russian officials agreed to establish 10 humanitarian corridors for bringing aid in and residents out of besieged cities â€” one from Mariupol and several around Kyiv and in the eastern Luhansk region, Ukrainian Deputy Prime Minister Iryna Vereshchuk said Saturday.

She also announced plans to deliver humanitarian aid to the southern city of Kherson, which Russia seized early in the war.

Ukraine and Russia have held several rounds of negotiations aimed at ending the conflict but remain divided over several issues, with Russia pressing for its neighborâ€™s demilitarization and Kyiv demanding security guarantees.

In a call with German Chancellor Olaf Scholz on Friday, Putin said Ukraine was trying to â€œdrag the negotiations by making a series of new, unrealistic proposals,â€ according to the Kremlin.

British Foreign Secretary Liz Truss, meanwhile, accused Putin of using the talks as a â€œsmokescreenâ€ while his forces regroup. â€œWe donâ€™t see any serious withdrawal of Russian troops or any serious proposals on the table,â€ she told the Times of London.

The British Department of Defense said in its latest intelligence assessment that the Kremlin â€œhas been surprised by the scale and ferocity of Ukrainian resistanceâ€ and â€œis now pursuing a strategy of attritionâ€ that is likely to involve indiscriminate attacks.

U.S. Defense Secretary Lloyd Austin, during a Saturday visit to NATO ally Bulgaria, said the Russian invasion had â€œstalled on a number of frontsâ€ but the U.S. had not yet seen signs that Putin was deploying additional forces.

Around Ukraine, hospitals, schools and buildings where people sought safety have been attacked.

At least 130 people survived the Wednesday bombing of a Mariupol theater that was being used a shelter, but another 1,300 were believed to be still inside, Ludmyla Denisova, the Ukrainian Parliamentâ€™s human rights commissioner, said Friday.

â€œWe pray that they will all be alive, but so far there is no information about them,â€ Denisova told Ukrainian television.

Satellite images from Maxar Technologies showed a long line of cars leaving Mariupol as people tried to evacuate. Zelenskyy said more than 9,000 people were able to leave Friday along a route that leads 227 kilometers (141 miles) away to the city of Zaporizhzhia â€” which is also under attack.

Russian forces have fired on eight cities and villages in the eastern Donetsk region in the past 24 hours, including Mariupol, Ukraineâ€™s national police said Saturday.

The attacks with rockets and heavy artillery killed and wounded dozens of civilians, and damaged at least 37 residential buildings and facilities, including a school, a museum and a shopping center, it said.

In the western city of Lviv, Ukraineâ€™s cultural capital, which was hit by Russian missiles on Friday, military veterans were training dozens of civilians on how to handle firearms and grenades.

â€œItâ€™s hard, because I have really weak hands, but I can manage it,â€ said one trainee, 22-year-old Katarina Ishchenko.