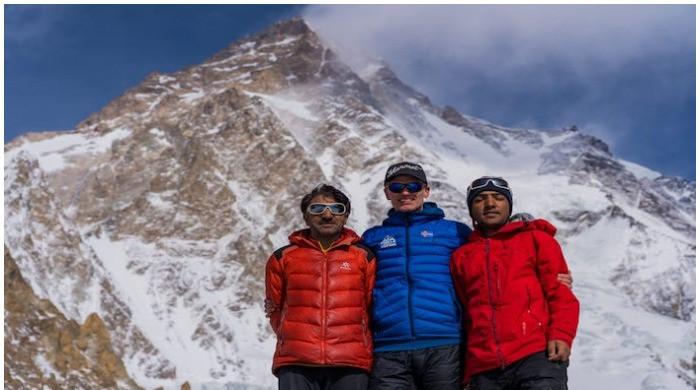 SKARDU: Pakistani mountaineer Sajid Ali Sadpara claimed on Wednesday to have retrieved the body of his father, Ali Sadpara, who was another renowned mountaineer of the country.

Ali Sadpara had been declared dead after he went missing with two of his companions during their winter summit of the mighty K2 on February 5.

Last month, Sajid had shared his intention to summit the K2 again to make a documentary on the life of his fatherÂ  as a mountaineer and to find the bodies of the fallen climbers.Â

â€œI want to go to K2 to know what happened to my father and John Snorri,â€ was what Sajid stated in a press conference.

FollowingÂ  the announcement, Sajid,Â  along with Canadian filmmaker Elia Saikaly and Pasang Kaji Sherpa from Nepal, started the the K2’s summit on July 24.Â

Moreover, Sajid claimed to have retrieved the body of the nationâ€™s hero in a tweet from his official account. According to the post, Sajid’s last location was at Camp 4.

â€œI have secured body of our hero at C-4. An Argentinian climber has been a great help in bringing body above bottleneck till C-4. I offered Fatiha & recited Holy Quran on behalf of whole nation. Secured place with Pakistan flag. Sources claim that Sajid and the others summited the K2 without oxygen,â€ said Sajid in his tweet.

Moreover, Team Ali Sadpara tweeted that Sajid has recovered the body of his father all on his own and brought it down to Camp 4.

â€œCamp-4 K-2 Sajid has single-handedly retrieved the body from above the bottleneck, carried down to C-4 and have secured the body there. He has offered Fatiha & recited verses of Holy Quran as per Islamic rituals and according to wishes of his mother,â€ said the post.

Sources claim that Sajid and his team have summited the K2 without oxygen.

Earlier on Monday during their reported stay at Camp 4, Saikaly sent an SOS message seeking oxygen, saying the team was running out of it.

Bodies sighted at the bottleneck

Gilgit Baltistan Information Minister Fateh Ullah Khan said in a statement issued on Monday that the bodies of Ali Sadpara and his companions Iceland’s John Snorri and John Chile’s Juan Pablo Mohr,Â  had been located at the bottleneck of the K2.

The officials said that the deceased mountaineers were identified by the colour of their clothes.

Sadpara, Snorri and Mohr had departed for their journey to scale the K2 on February 3. They had started their attempt for the final summit in the early hours of February 5 but went missing on the same day.

Following the suspension of contact with the mountaineers, a thorough search was carried out by the Pakistan Army. However, the mountaineers were declared dead since the bodies couldnâ€™t be recovered.