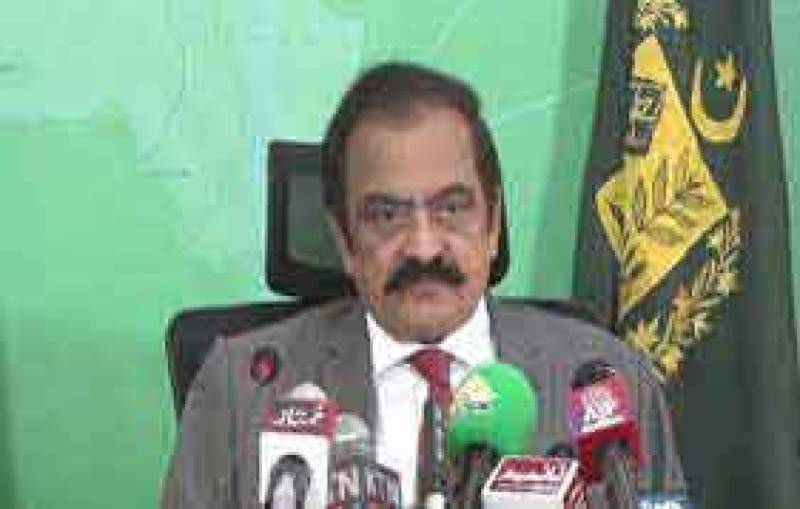 ISLAMABAD     –   Minister of Interior Rana Sana Ullah Khan said on Sunday that Im­ran Khan’s announce­ment of resignation from provincial assem­blies was illogical and an angry reaction.

Talking to a private news channel, he said that Imran’s announce­ment of resignation from assemblies was a result of “frustration” because both chief ministers of KP and Punjab could not gather people in large numbers for the long march culminated at Rawalpindi. He assert­ed Imran to realize that “Pakistani nation has re­jected his narrative”.

He quipped that if Imran had a problem with the current politi­cal system then the lat­ter should bring a “rev­olution”, adding that if Imran was successful in winning the elections, he would still remain in the same system which he had always disregarded by calling it “corrupt”.

Replying to a question, the minister held that Chief Minister Punjab Parvez Elahi could not dissolve Punjab Assem­bly because the Paki­stan Democratic Move­ment (PDM) knew very well how to counter his (Imran) political move.

“PTI’s decision to re­sign from the assem­blies would be proven to be a folly while their own parliamentarians will leave,” he antici­pated. He said that if a no-confidence motion was brought in the Pun­jab assembly against the CM, the provin­cial government would lose around 15 to 20 votes because some PTI MPAs were in touch with them (PDM).

He said in his opinion, if PTI resigned from provincial assemblies, the by-elections would only be held as the

flood had destroyed the economy, adding that it was impossible to hold general elections across the coun­try at this point in time. The minister while describing the decisions the federal government was forced to take given the circumstanc­es to address the econom­ic challenges after assum­ing power conceded that as a party they had sacri­ficed their political capital but the State was protected via those needed tough de­cisions. The minister add­ed that the government re­quires four to six months to deliver economic progress and provide relief to the common people. Replying to another question about Senator Azam Swati’s arrest by the FIA, Rana Sana Ullah said that the PTI stalwart’s speech was anti-state and “uncivilized”, now the insti­tution (FIA) would inves­tigate and act within their constitutional limits. He further said that he special­ly asked the authorities to provide special care while ensuring comfort and medi­cation for the senator.