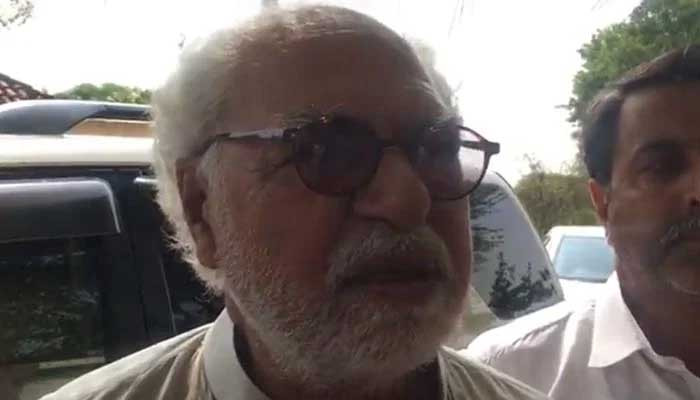 ISLAMABAD: A district and sessions court in Islamabad on Monday extended the physical remand of senior journalist Ayaz Amir in the murder case of his daughter-in-law.

On September 24, the police took Ayaz into custody after obtaining arrest warrants for him and his former wife in connection with the murder of Sara Inam, his daughter-in-law, who has allegedly been killed by her husband Shahnawaz Amir.

Ayaz was taken to Shahzad Town police station, where in the police report registered following the murder, an additional clause Section 109 (punishment for abetment) of the Pakistan Penal Code was added at the request of Sara’s uncles — Colonel (retd) Ikram and Zia-ur-Rahim — who have blamed Amir and his former wife for their niece’s murder.

Sara was allegedly killed by Shahnawaz at home after a row over a “family issue” on Friday,

During the course of proceedings, the police produced Amir before the court after the completion of his one-day physical remand.

Amir rose to the rostrum upon his turn and said, “I will fight my case myself.”

At this, he asked the plaintiff to show any evidence against him. “Nothing is against me,” he argued.

The police requested the court to extend the physical remand of Amir for seven days.

The court, however, rejected the police’s request and extended his physical remand for one day.

Meanwhile, the district and sessions court granted pre-arrest bail to Samina Shah, mother of Shahnawaz Amir, the prime suspect in the murder case, against surety bonds worth Rs 50,000.

The police also produced Shahnawaz Amir, the prime suspect, before the court after completion of his two-day physical remand.

After hearing the arguments from both sides, the court extended the physical remand of Shahnawaz Amir for another three days.

The FIR states that the suspect’s mother, Samina Shah, called the police on Friday (September 23) to inform them that her son, Shahnawaz, had killed his wife with a dumbbell.

According to the FIR, Shah told the police that her son was in the house and had hidden the body of his wife. Following this, the police raided the house.

In the complaint, the police said that Shahnawaz had locked himself inside his room and when the personnel broke inside, there were blood spots on his hands and clothes.

Once the police got hold of Shahnawaz, he, according to the FIR, confessed to hitting his wife repeatedly with a dumbbell during an argument and then later hiding the Canadian national’s body in the bathtub.

The “murder weapon”, the FIR quoted Shahnawaz as saying, was hidden under his bed. Police, after examining the dumbbell, reportedly found blood and hair on it. They later sent it for forensics.

The victim’s body has been sent to the Polyclinic Hospital for postmortem, the FIR added.