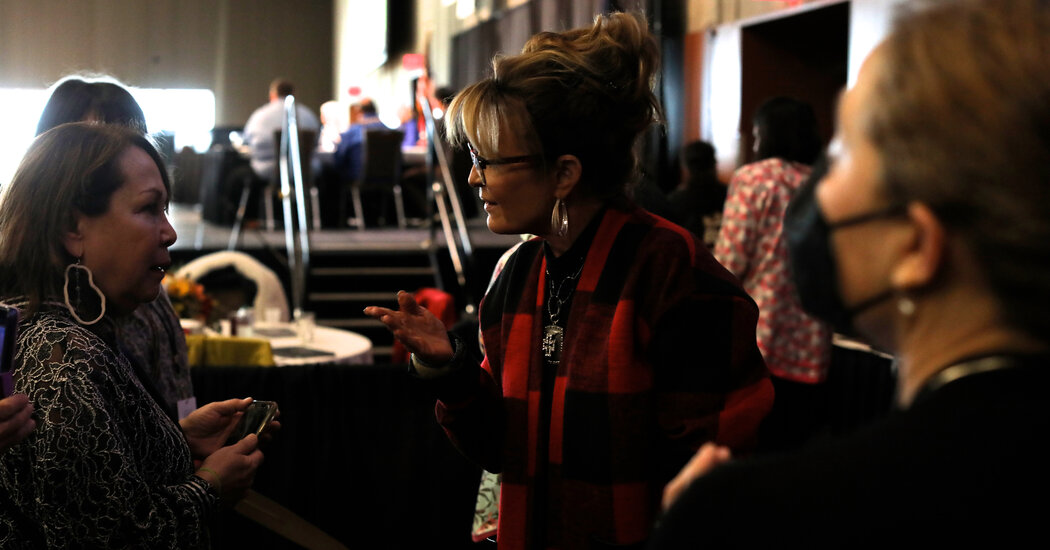 It is hard to overstate just how much of a jolt to the political system Sarah Palin delivered when she defeated her first fellow Republican 16 years ago.

He was Frank Murkowski, the sitting governor of Alaska and a towering figure in the 49th state. She was a “hockey mom” and the former mayor of a small, working-class town who vowed to stick it to the “good ol’ boys.” That race put her on the map with the national Republican Party and set her on a path that would change her life, and the tenor of American politics for years to come.

Then, Ms. Palin was at the vanguard of the dog-whistling, no-apologies political culture that former President Donald J. Trump now embodies.

Today, having lost her bid for Congress after years out of the spotlight, Ms. Palin is a much diminished force.

She was, in many ways, undone by the same political currents she rode to national prominence, first as Senator John McCain’s vice-presidential nominee in 2008 and later as a Tea Party luminary and Fox News star. Along the way, she helped redefine the outer limits of what a politician could say as she made dark insinuations about Barack Obama’s background and false claims about government “death panels” that could deny health care to seniors and people with disabilities.

Now, a generation of Republican stars follows the template she helped create as a hybrid celebrity-politician who relished fighting with elements in her own party as much as fighting with Democrats — none more so than Mr. Trump, who watched her closely for years before deciding to run for president himself. He ensured this month that he would remain in the spotlight, announcing another bid for the White House in 2024.

But as the next generation rose up, Ms. Palin’s brand of politics no longer seemed as novel or as outrageous. Next to Mr. Trump’s lies about a huge conspiracy to deny him a second term, or Representative Marjorie Taylor Greene’s casual allusions to political violence, Ms. Palin’s provocations more than a decade ago can seem almost quaint.

The Aftermath of the 2022 Midterm Elections

A moment of reflection. In the aftermath of the midterms, Democrats and Republicans face key questions about the future of their parties. With the House and Senate now decided, here’s where things stand:

A new era for House Democrats. Speaker Nancy Pelosi, the first woman to serve in the post and the face of House Democrats for two decades, will not pursue a leadership post in the next Congress. A trio of new leaders is poised to take over their caucus’s top ranks.

Divided government. What does a Republican-controlled House and a Democratic-run Senate mean for the next two years? Most likely a return to the gridlock and brinkmanship that have defined a divided federal government in recent years.

Ms. Palin, 58, started on the road to political fame after her upset victory in the governor’s race in Alaska in 2006, when the Republican Party was in need of a fresh face. Republicans had just lost badly in the midterm elections — what President George W. Bush called a “thumping.” The G.O.P.’s conservative base was angry with party leaders over their support for an immigration reform bill. And the broader public was war-weary after five years of conflict in the Middle East with no end in sight.

Ms. Palin was as different from a Bush Republican as they come. She promised to do things as governor that politicians in her party typically didn’t, such as restoring social welfare funding and scrutinizing tax breaks her state gave to large corporations. She appealed to Alaskans’ insularity, too, channeling mistrust of outsiders like oil companies, fisheries and federal agencies.

She prided herself on being able to work across party lines. One Democrat she developed a relationship with in the state Legislature was Mary Peltola, who has now defeated Ms. Palin twice — first in a special election over the summer to fill Alaska’s lone congressional seat and now for a full two-year term. Ms. Peltola is the first Alaska Native to serve in Congress, and Ms. Palin has spoken of her warmly despite their political rivalry.

But Ms. Palin had long displayed a willingness to make specious claims that her opponents were untrustworthy because they were different, and to insinuate that those differences stemmed from a lack of patriotism or Christian faith. In her victorious race for mayor of Wasilla in 1996, she brought the country’s culture wars to the steps of city hall, championing biblical principles and the Second Amendment. She suggested — falsely — that electing her would give Wasilla its “first” Christian mayor. (Her opponent and the incumbent mayor, John C. Stein, was raised Lutheran.)

Ms. Palin’s supporters were always drawn to her not just for the battles she picked and the enemies she made — the people she denigrated as “blue bloods” in the G.O.P. leadership and the “lame-stream media” were two favorite targets — but to her ordinariness. She was a working mother who had a young son with Down syndrome, a teenage daughter who got pregnant right when the Palin family was introduced to the nation in 2008, and a son who served in Iraq.

When Mr. McCain picked her as his running mate, he told advisers at the time that he knew it was a gamble, and said in characteristically colorful terms that that was what he liked about it. It was a Hail Mary pass that fell short in the end. Ms. Palin’s youth and freshness balanced out Mr. McCain’s image as an aging, decades-long denizen of Washington. But her inexperience in national and world affairs made her a liability. She sometimes struggled to answer basic questions such as what newspapers she read.

But to the legions of followers that seemed to grow larger by the day on the campaign trail — at one rally in The Villages retirement community in Florida, 60,000 people turned out to see her speak — the missteps only made her more authentic. And as she became more popular, her language grew sharper and more incendiary.

At one point, with help from McCain campaign speechwriters, she drew widespread condemnation after accusing Mr. Obama of “palling around with terrorists,” which many people at the time saw as a barely veiled, racist allegation. (False rumors that Mr. Obama was secretly a Muslim had long circulated among conservatives.) Her rallies started to draw angry outbursts from the crowd when she mentioned Mr. Obama’s name. People shouted “treason!” and “Obama bin Laden.”

Many wrote off Ms. Palin for dead politically after Mr. McCain lost and when, a few months later, she resigned as governor. But to many Republicans, especially those outside Washington, she was still the biggest star in the party. She went on to write a best-selling memoir, “Going Rogue,” and signed a contract with Fox News worth $1 million a year.

She was initially considered a front-runner for the G.O.P. presidential nomination in 2012, at times beating or slightly trailing the eventual nominee, Mitt Romney, in the polls. And when she embarked on a bus tour up the East Coast over Memorial Day weekend in 2011, she drew so much media attention that news of her stop in New Hampshire pushed Mr. Romney’s announcement for president that same day off the front page of the local paper.

It was during that trip she made a fateful visit to Trump Tower at Mr. Trump’s invitation, where the two met and posed for the throngs of paparazzi waiting on the sidewalk before stopping at a nearby pizzeria for slices. (Infamously, he ate his with a fork.)

At the time, many political insiders thought the possibility that she could run was very high. But privately, she was already expressing doubts about the toll that another campaign would take on her family. And when a group of Republican activists met with her near her home in Scottsdale, Ariz., to pitch her on the idea of running — including two future Trump campaign officials, Stephen K. Bannon and David N. Bossie — she conveyed as much.

Ms. Palin was never truly able to rekindle the same spark she lit during the 2008 campaign, when she was the loose-lipped insurgent to Mr. McCain’s elder statesman of the establishment.

In 2016, she declined again to run for the Republican nomination, clearing the path for the next Republican insurgent: Mr. Trump. He asked her for her endorsement before the Iowa caucuses in February, and she obliged. In a column she wrote later that year for Breitbart, Ms. Palin recalled with delight what a friend had told her about why she liked Mr. Trump so much: Liberals, establishment Republicans and the media couldn’t stand him. “I love him because YOU hate him!” Ms. Palin said her friend told her.

The reversal of Ms. Palin’s political fortunes today means that many of the renegades who modeled themselves after her — and many of her rivals — have outlasted her. Lisa Murkowski, the daughter of the former Alaska governor Ms. Palin defeated 16 years ago by more than 30 points, has won her bid for another term to the United States Senate. (Ms. Murkowski, a Republican, endorsed Ms. Peltola, the Democrat who beat Ms. Palin on Tuesday.)

Ms. Palin, never one to be especially sentimental about public service, often seemed disengaged during what was supposed to be her comeback campaign and revival as a national conservative icon. Though she went into the race with the highest name recognition of any rival and had Mr. Trump’s endorsement, she struggled to raise money toward the end.

And she kept a light schedule. In the final days of the election, with little time left to campaign, she was spotted at a Knicks game in New York.