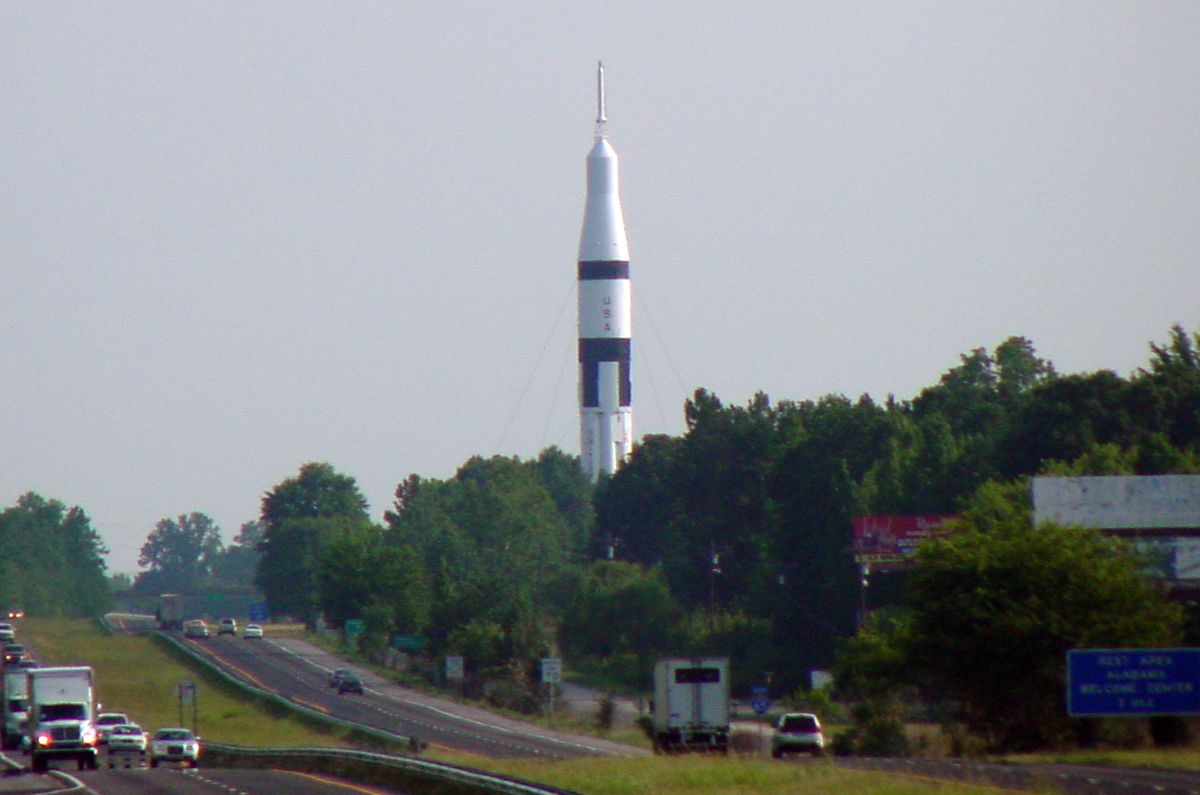 A roadside rocket display that for more than 40 years has stood as a welcome sign for drivers entering the state of Alabama is no longer safe to be left standing and should now be replaced, according to NASA and the museum charged with its care.

Officials at the agency’s Marshall Space Flight Center and the U.S. Space and Rocket Center in Huntsville have decided that the Saturn IB rocket erected in 1979 (opens in new tab) at the Ardmore Welcome Center in Elkmont needs to be replaced. More than just a matter of moving it elsewhere, the Apollo-era artifact may be destroyed due to its failing condition after nearly four-and-a-half decades on outdoor, vertical display.

“A beacon to travelers along I-65 for many years, this rocket was not built to withstand more than 40 years of continuous exposure to the elements of nature,” NASA officials said in a statement. “The support structure has deteriorated over the years, the damage is too significant to repair, and could potentially pose a structural safety issue if left in place.”

Initial estimates provided by the rocket center to disassemble and reconstruct the Saturn IB — one of only two remaining examples (opens in new tab) of the rocket in the world — exceed $7 million, with no assurance that the booster would survive the process. Even if it could be safely lowered, moving the rocket to restore it elsewhere is not an option given size constraints for the overpass bridges on I-65 and restrictions on other routes.

“Extensive repairs, if possible, would need to be done on site and require a team of experts working full time for more than a year,” said the Saturn IB’s curators at the rocket center. “None of these efforts will prevent the inevitable deterioration of a vehicle that was not designed to stand outdoors.”

‘A significant piece of space hardware’

A plaque installed near the rocket dedicates the display “to the men and women who made it possible for this nation [the United States] to explore space for peaceful purposes” through the cooperation of NASA, the Marshall Space Flight Center and the State of Alabama.

The idea to erect such an exhibit began in 1974, when then-Governor George Wallace wrote to Marshall’s director William Lucas requesting a “significant piece of space hardware, such as a Saturn rocket, be erected on the Welcome Center site (opens in new tab) as a permanent landmark.” At the time, the Welcome Center was a year from opening along what was then a new interstate highway.

The Apollo program was not yet over, and, though the Saturn IB launches to the Skylab orbital workshop were complete, at least one more use of the rocket was planned for the joint U.S. and Soviet Union mission, the Apollo-Soyuz Test Project, in 1975. NASA was further limited by a congressional mandate to keep its stock of Apollo hardware “so as to be able to restore it, if required, to flight condition.”

What Marshall was ultimately able to provide the state was a mixture of authentic and mock hardware. The first (or lower) stage of the rocket is flight hardware, referred to by NASA as S-IB-211. Between December 1967 and April 1968, the stage was test-fired seven times on Marshall’s Saturn IB test stand.

The upper stage, or S-IVB, is comprised of a real interstage and forward skirt mounted to a mockup body that was originally built for underwater training at Marshall’s Neutral Buoyancy Simulator (NBS). The forward skirt was mounted upside down at the aft end of the body intentionally, but the reasons for doing so are unknown today.

The spacecraft-lunar module adapter, or SLA, and instrument unit (which held the avionics for the launch vehicle) are authentic hardware, as likely is the launch escape system tower topping the rocket.

The Apollo command module is a boilerplate mockup. Its service module is likely Block 1 (first generation) hardware that was previously exhibited at Marshall.

All together, the pieces formed the 142-foot-tall (43-meter) Saturn IB (opens in new tab). The rocket rests on eight authentic hold-down arms just as if it was on a launch pad.

Efforts to restore the rocket were undertaken in 2006 and 2014, with the latter first focused on repairing its base. That work alone was estimated to cost $15,000 and took a few years to get underway.

NASA and the U.S. Space & Rocket Center announced its decision to retire the display on Friday (Jan. 19) after the director of the Alabama Tourism Department made public comments suggesting that it was time to replace the Saturn IB with something that better reflected the future of the U.S. space program.

“What Huntsville needs to market is the next big project, going back to the moon, instead of people saying nothing ever changes,” Lee Sentell told The Huntsville Times (opens in new tab). “I’m for putting up something that’s future.”

“This is an opportunity to create a landmark that will withstand the test of time and serve as a symbol of Alabama’s past and current role in space and technology,” Whitt said in a statement released by the rocket center. “Everyone involved is working together to create the next great icon for our community, our state and our nation.”

For its part, the U.S. Space and Rocket Center (opens in new tab) wants a “meaningful, sustainable and economically feasible replacement for the iconic rocket.”

“Whether the rocket is replaced by a replica of the Saturn IB or another rocket, we’re excited at the possibility for a new enduring emblem of Alabama’s leadership in space exploration,” said Kimberly Robinson, CEO and executive director of the center.