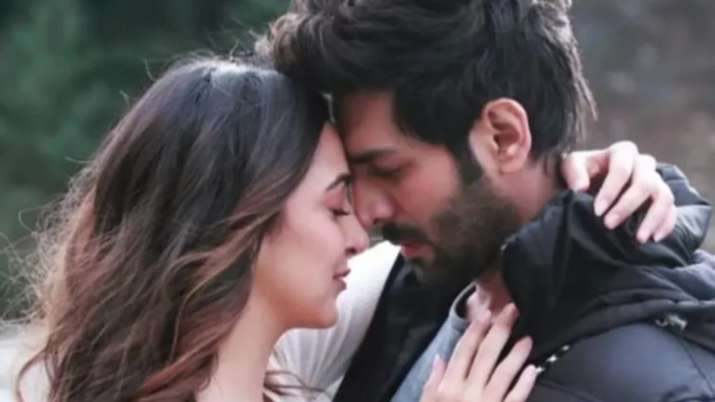 Satyaprem Ki Katha: Kartik Aaryan and Kiara Advani will be soon together in Satyaprem Ki Katha. Earlier the film was titled Satyanarayan Ki Katha. After claims of hurting sentiments, last year the makers had announced that the film’s name will be changed. However, the new name was revealed then. On Kiara’s birthday, Kartik who most recently featured opposite Kiara in horror comedy “Bhool Bhulaiyaa 2” shared an update with their fans.

The new title of Kartik and Kiara’s upcoming movie is “Satyanarayan Ki Katha”. Taking to Instagram on Sunday, the actor revealed the film has been retitled “Satyaprem Ki Katha” as he wished co-star Advani on her 30th birthday. “Happy Birthday Katha!! Tumhaara SatyaPrem #SatyapremKiKatha @kiaraaliaadvani” the actor alongside a still from the movie. Replying to Aaryan’s post, Advani wrote, “See you on set Sathuu #SatyapremKiKatha”

Last year in July, director Sameer Vidwans, had released an official statement about the change in the film’s title. The director claimed the decision to change the name aims to avoid hurting sentiments. Vidwans had shared the statement on Twitter and Kartik re-tweeted it on his verified Twitter handle.

The statement read: “A title of the film is something that emerges organically through the creative process. We have taken a decision to change the title of our recently announced film ‘Satyanarayan Ki Katha’ to avoid hurting sentiments, even if that’s purely unintentional. Producers of the film and the creative team also are in complete support of this decision. We will be announcing a new title for our love story in the due course of our journey. Sincerely, Sameer Vidwans.”

Can Samantha Ruth Prabhu, Naga Chaitanya do a film together? Actor has THIS to say