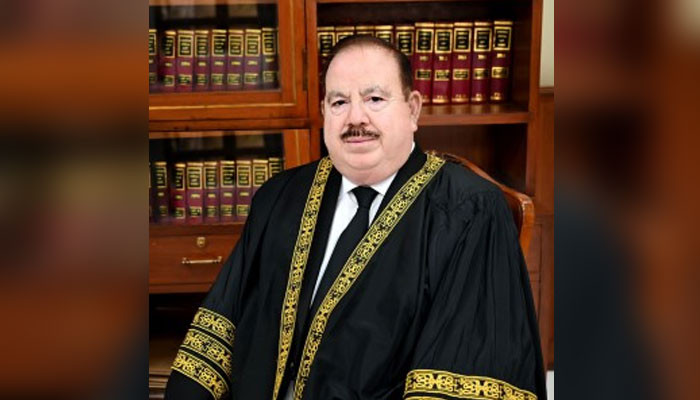 ISLAMABAD: Supreme Court’s Justice Tariq Masood on Tuesday recused himself from hearing the petitions seeking investigations into the US cypher case.

The apex court took up the identical pleas seeking a probe into the alleged “threat letter” incorporating an alleged foreign conspiracy to remove former premier Imran Khan’s government. However, Justice Masood pulled out of the hearing, requesting Chief Justice Umar Ata Bandial to appoint another judge to hear these pleas.

After this, the appeals were sent back to the CJP.

The petitions were filed in the apex court by Advocates Zulfiqar Ahmed Bhutta, Syed Tariq Badar and Naeemul Hassan, while separate pleas were filed by Pakistan Tehreek-e-Insaf (PTI) and the government as well.

The PTI chief, in a public gathering of PTI workers on March 27, 2022, had pulled out a piece of paper from his pocket and waved it at the crowd, claiming that it was evidence of an “international conspiracy” being hatched to topple his government.

Later, Advocate Bhutta had first filed a petition in the Supreme Court under Article 184(3) of the Constitution, naming the federation of Pakistan and the law secretary as respondents.

He had argued that it was an unusual situation that could destabilise the country’s law and order by seeding hostility against cordial countries. He had implored the apex court that the respondent may be directed to deliver the “letter” to the civil and military officers to examine.

However, the registrar’s office returned the plea objecting that the petitioner had not pointed out what questions of public importance were involved in the case concerning any fundamental rights to invoke the jurisdiction of the Supreme Court under Article 184(3) of the Constitution.

The registrar’s office added that the plea did not meet the conditions required to invoke the court’s extraordinary jurisdiction under Article 184(3) of the Constitution.

However, the applicant Zulfiqar Ahmed Bhutta filed a chamber appeal against the registrar’s objections in the apex court and pleaded for his appeal to be accepted and place the matter before the bench of the apex court.

He had stated that his petition was fully apt under Article 184(3) of the constitution and that the registrar’s objections to its fixation before the bench were unlawful.