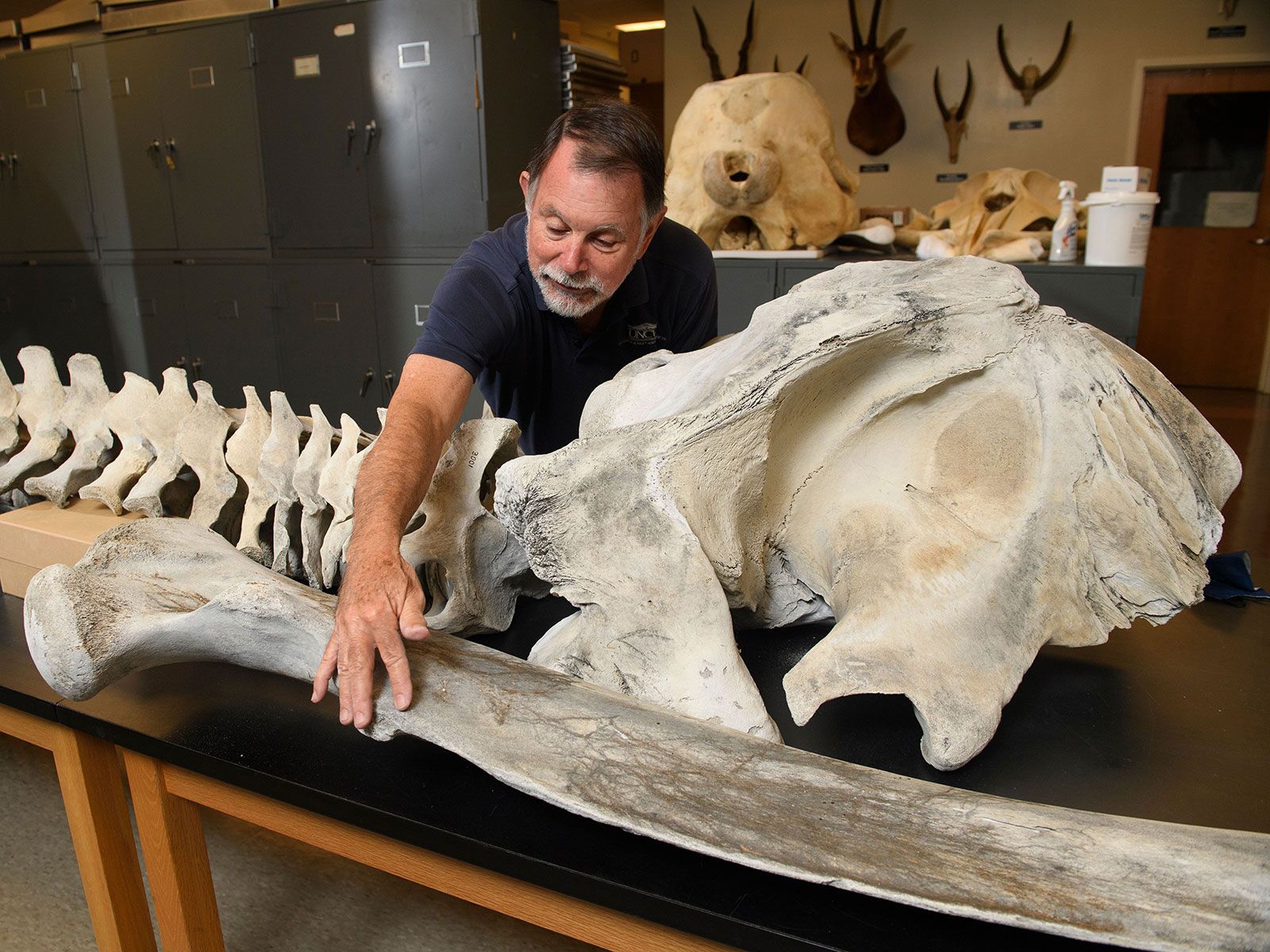 Whale watchers along North America’s West Coast thrill to the sight of gray whales swimming from Alaska to Mexico, and back again, each year. The giant mammals can be spotted on the surface, from boats or onshore. But in the Atlantic Ocean gray whales are just a memory, mentioned in historical documents or evoked by the occasional find of a single ancient bone—that is until a surprisingly-intact skeleton emerged from the sands of a North Carolina beach.

The most complete North Atlantic gray whale skeleton ever discovered, which was beached and then meticulously butchered by indigenous peoples more than 800 years ago, was found in the 1970s. But until recently it was misidentified as a humpback rather than a one-of-a-kind find. Now, a study published today in Royal Society Open Science demonstrates how the remains can help piece together the story of Atlantic gray whales, which vanished during the 1700s. The skeleton shows that humans ate gray whales even before the commercial whaling era, though we may not be the only cause of their demise. It also suggests that the story of Atlantic gray whales may not be over. Gray whale population histories during past eras, recreated by data from finds like the skeleton, suggest a possible, if tenuous, future for the cetacean in Atlantic waters.

The 42-piece juvenile gray whale skeleton, which includes a nearly complete skull and jaws, extensive vertebrae, and ribs, is an exceptionally rare find. Because whales live in the open ocean few of their remains are found on land. Most previous Atlantic gray whale finds, rare and scattered on the shorelines of Europe, Iceland, and the US East Coast, consist of only a single bone.

The skeleton was discovered by beachcombers at the south end of Onslow Beach near the inlet of the New River. As its remains emerged from the sands a bone or two at a time over the course of several years in the 1970s, a local couple collected them and stored them in their garage. Eventually Rita and Tom McCabe (both deceased) drove a pickup truck full of the bones to the museum at the University of North Carolina Wilmington in 1987—where the donation was mistaken for humpback whale remains. It took more than three decades before keen-eyed scientists, comparing shapes and forms of the bones, realized the truth. The specimen now resides in the Smithsonian National Museum of Natural History, where it was gifted from UNC Wilmington in November, 2021.

Radiocarbon dating on a rib bone sample suggests the whale is about 827 years old, and swam in the ocean around 1200 C.E., some 500 years before whalers finished off its kind in the North Atlantic.

The juvenile, some 30 feet long, was found near the inlet of a large estuary that might have been used as a breeding and calving grounds similar to those favored by living gray whales in the shallow bays and lagoons off Baja California.

Lead author Alyson Fleming, a marine biologist at the University of North Carolina Wilmington and the University of Wisconsin-Madison, says the specimen will enable research like size and shape comparisons to other whale populations, genetic analysis, and future lines of evidence as yet unknown. “Who knows what future analyses of these bones may shed new light on the species or its evolutionary history?”

One intriguing fact is already clear; the bones reveal that the whale was butchered by indigenous inhabitants, who most likely used the sharp stone axes popular in what’s known as the Woodland Period.

The remains suggest that the whale was beached and settled into ancient sediments partially submerged lying on its right side, because those bones were better preserved while those on the left side were left exposed. Later, as the area’s barrier islands shifted around over time, the whale was entirely buried and preserved.

The authors believe the butchering was likely opportunistic, with humans taking advantage of free calories provided by a beached whale, but that’s no sure thing. Indigenous inhabitants in the area could have ventured out in boats to kill the whale or drive it ashore, especially in shallow waters.

Previous whale finds suggest such behavior. “For cultures in the Arctic and Pacific Northwest systematic whale hunting has been an important part of coastal subsistence culture since prehistoric periods,” says Fleming. “On the Medieval Dutch and Belgian coast, archaeological evidence from middens suggests rural use of gray whales beginning in 400 C.E., likely originating from opportunistic strandings, then extending to elite and ecclesiastical consumption in the 8th century with development of active whaling in the 12th century.”

Co-author Briana Pobiner, a paleoanthropologist at the Smithsonian National Museum of Natural History specializing in the evolution of human diet, says researchers don’t know how often prehistoric inhabitants might have eaten or even hunted such whales. Few remains survive, and even when they do, their huge masses of muscle and blubber mean they might have been chopped up without leaving much evidence on the bones. “So we can’t really tell if this was a rare behavior, or a more common but rarely preserved behavior,” Pobiner notes.

Gray whales, which can weigh 90,000 pounds and stretch nearly 50 feet long, swam in the Atlantic at least 40,000 years ago, according to fossils found in 70 feet of water off the Georgia coast, while genetics suggest they entered the Atlantic before the last glacial period, 130,000 to 115,000 years ago, if not even earlier. But whalers finished them off in Atlantic waters during the early 1700s. (Excepting a few recent outlier sightings, like a whale off Namibia’s southeastern Atlantic coast, which genetics traced back to a western Pacific population nearly 17,000 miles away.)

Genetic data suggests that Atlantic gray whales descended from North Pacific populations during times when the oceans were more interconnected. “In other words, the single species of living gray whales likely colonized the Atlantic multiple times from the Pacific over the past few hundred thousand years, probably during times of sea-level high that corresponded with glacial minima,” says co-author Nick Pyenson, a research geologist and curator of fossil marine mammals at the National Museum of Natural History

Though archaeological evidence suggests that some gray whales were hunted in Roman Europe, and indigenous groups clearly butchered them in North America, the genetic research suggests that Atlantic grays never had populations as large as their Pacific relatives. At least in part, that may be because they had less coastal shelf habitat and thus fewer potential feeding areas.

And those Atlantic whales may have been fading before the whaling industry emerged. Elizabeth Alter, marine and evolutionary biologist at California State University Monterey Bay, co-authored the genetic study concluding that gray whales persisted in the Atlantic for at least tens of thousands of years. She says their stay lasted through the Last Glacial Maximum when much of their habitat was covered in sea ice. “However the patterns of genetic diversity over time suggest the decline in the population began well before industrial-scale whaling, perhaps related to changing oceanographic regimes during the Holocene,” Alter says.

Though the species wasn’t targeted like some others, Atlantic gray whale hunting did surge when industrial-scale whaling interests exacted their terrible toll on the world’s oceans. Historical accounts refer to the taking of gray whales by crews as disparate as the Basques, Norwegians and Nantucketers, which likely delivered the Atlantic gray whale’s coup de gras.

Pacific populations of gray whales (Eschrichtius robustes), commonly found near shore and even curious about boats, nearly suffered the same fate. By the 1930s, when the first Pacific Coast protections were launched, 75 years of industrial whaling had left only perhaps 1,000 gray whales alive. After hunting ceased in coastal waters, however, the giant mammals rebounded to a peak of some 27,000 individuals by 2016.

For millions of years gray whales have proved resourceful, surviving perhaps 40 major cycles of global warming, and cooling. A key reason for this may be their ability to exploit varied diets, from seafloor worms to krill and herring.

As Arctic sea ice melts, it could provide gray whales with an opportunity to adapt once more. “The gray whale could venture back into the Atlantic as the northern passage continues to melt,” says Scott Noakes, a marine scientist at the University of Georgia. “I don’t think anyone has found an ecological reason for the gray whale to become extinct in the Atlantic.”

“So while movement from the Pacific is increasingly possible, it’s not at all obvious that gray whales, with their unique coastal ecology, would be able to eke out a living in today’s Atlantic Ocean,” says Elizabeth Alter.

Today’s challenges not withstanding, Nick Pyenson is encouraged by what happened to the same species in the Pacific during just the past century. “Gray whales were the among the first whale species protected in the Pacific, and their population has rebounded from very low numbers there,” he says. “If history is a guide there may not be enough habitat to support as large of a population (but) there’s strong potential for the Atlantic as well.”