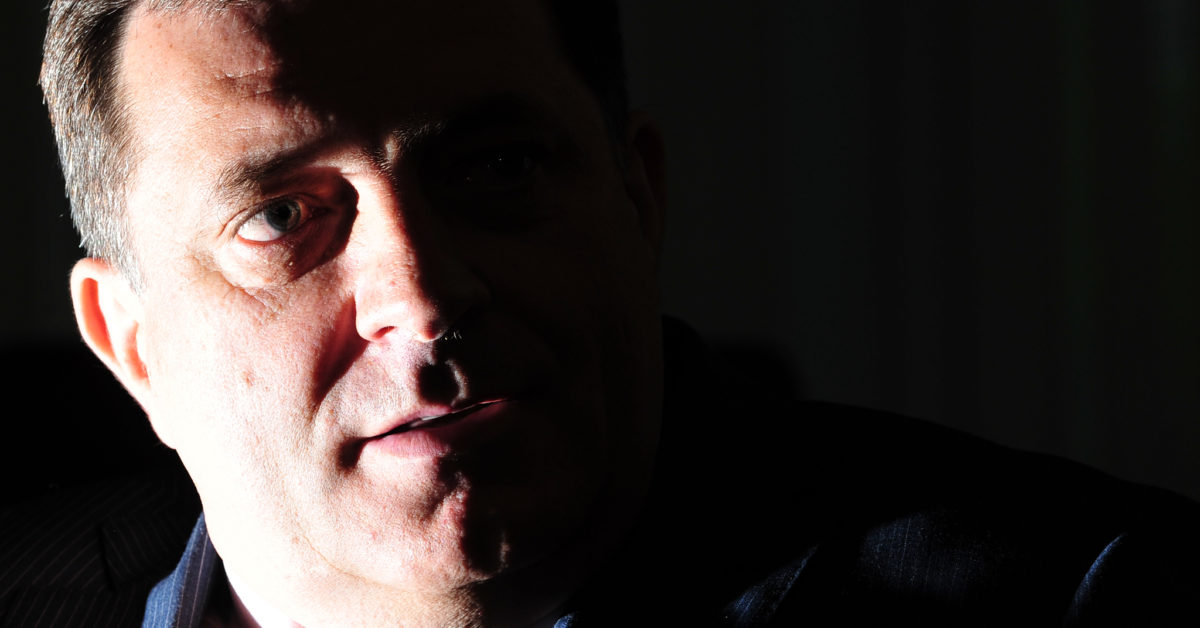 And, once again, the EU has expressed outrage â€” but held off on a concrete response.Â

Itâ€™s a pattern that has played out in recent years as Bosnia faces rising threats to the 1995 peace accords that ended a devastating war and established a power-sharing arrangement among Bosniaâ€™s three main ethnic groups: the Bosniaks, the Serbs and the Croats.

Those threats have accelerated during the last few months. Dodik â€” the Serb member of the three-person presidential body governing Bosnia â€” is, once again, fomenting nationalist sentiment, making a string of moves aimed at securing more rights for the Serb-majority Republika Srpska entity within Bosnia. Itâ€™s a campaign many have likened to a secession attempt.Â

Earlier this month, Bosnian Serbs took to the streets to celebrate the Day of Republika Srpska, a banned holiday marking the creation of a detached Serb parastate in 1992, a precursor to the ethnic cleansing that soon enveloped the country during the Bosnian War.

While Dodik spent the day waving at adoring crowds, nationalist riots broke out in a dozen towns across Republika Srpska. Supporters sang nationalist and Islamophobic songs. They carried the Serbian tricolor flag alongside banners dedicated to Ratko Mladic, the Bosnian Serb general convicted of genocide. The rest of the country was spooked.

The EU expressed its own concern, strongly condemning the dayâ€™s rhetoric and threatening to consider sanctions or revise its regional assistance if the situation gets worse. Yet if history and the blocâ€™s current political dynamics are any guides, sustained follow-up could be sparse. EU members are not even united in opposition to Dodikâ€™s politics, with Hungary expressing support.Â

And, regional experts say, the bloc has a tendency to parachute in during a crisis, only to quickly recede after accepting minor concessions from local leaders.Â

â€œThe big problem is that Bosniaâ€™s international observers have a very short attention span,â€ said Florian Bieber, a professor of southeast European politics at the University of Graz. â€œWhen thereâ€™s a crisis, they see it as a window of opportunity for something to get done. And to get it done as fast as possible, they bypass all the institutions and talk to the ethnic leaders outside the institutional framework.â€

The EU has been here before

This is not the first time Dodik has taken steps toward withdrawing Republika Srpska from Bosnia. In 2016, he began vocally backing an independence referendum for the entity, even though the practice was illegal under the 1995 peace treaty, known as the Dayton Accords.Â Â

The EU special representative to Bosnia at the time, Lars-Gunnar Wigemark, went to Banjaluka,Â the entityâ€™s administrative center, to speak to Bosnian Serb leaders in what was seen as an attempt to diffuse the situation.

Most people expected Wigemark to pressure Dodik to back down. Yet the EU ambassador emerged stating he had just had â€œopen and useful talksâ€ with Dodik about Bosniaâ€™s EU application. He also inaugurated an EU-funded, freshly renovated section of the cityâ€™s Kastel fort, waxing poetic about Banjaluka becoming a tourist hub.Â

While Dodik did ultimately withdraw the independence question, he went through with a separate referendum on officially creating the Day of Republika Srpska â€” the event he just celebrated. A whopping 99.8 percent of people voted in favor.

Bieber said the incident reflects the typical dynamic between international groups and Bosniaâ€™s powerbrokers: Local political leaders promise just enough to get the EU off their backs, then sabotage the agreement â€œonce the EU blinks or looks elsewhere.â€

â€œItâ€™s this constant phenomenon of having pyromaniacs act as firefighters,â€ Bieber argued.

An excuse often heard in Brussels is that Bosniaâ€™s system is too complicated, its political scene too convoluted and its political leaders â€” most of whom established political careers after being involved in the war â€” too entrenched.

â€œThis is not a foreign country which has all of a sudden popped on the radar,â€ Bieber countered. â€œThere have been plenty of opportunities to understand whatâ€™s going on and itâ€™s been the same political system for 26 years, and to a large degree the same politicians.â€

Now, Dodik is once again chest-thumping and making moves that could unravel the Dayton Accords.

In December, the Republika Srpska regional parliament voted in favor of provisions that would see the entity opt out of national institutions such as the tax authority, the judiciary and the armed forces. The measures will come into force within a six-month period needed to draft new laws and possibly change the entityâ€™s constitution.

If Dodik succeeds in entirely pulling Bosnian Serbs out of state-level institutions, the whole system would fall apart.

â€œIn the last couple of months, Dodikâ€™s behavior has gone from being political rhetoric to concrete actions,â€ said Ä†amil DurakoviÄ‡, a politician who used to be the mayor of Srebrenica, where the Bosnian Serb army in 1995 slaughtered thousands of Bosniaks for their Muslim faith. â€œThatâ€™s why the situation is now at the brink of a serious escalation.â€

The main person in the country tasked with solving the crisis is not a Bosnian.Â

The countryâ€™s post-war development is monitored by a high representative â€” similar to a governor â€” who acts as a peace envoy and has the power to remove politicians and pass laws circumventing the countryâ€™s institutions. This role, too, was part of the peace deal.

Christian Schmidt, a former center-right German politician, became high representative in August and was met with a crisis from his first day on the job.

â€œIt was not expected that this would be a calm time,â€ Schmidt told POLITICO.

He insists his main goal is to increase Europeâ€™s interest in solving the countryâ€™s problems.

â€œThe international community needs to once again care a bit more about the Western Balkans and Bosnia and Herzegovina, especially,â€ he said. â€œThere has to be more commitment and political investment to get this crisis done and to not allow for the danger of a war, like 30 years ago.â€

The current crisis traces back to the middle of last year, when Schmidtâ€™s predecessor, Austrian politician Valentin Inzko, used his powers as high representative to pass a law banning genocide denial. The law also included punishment for those who glorify war criminals.

The move came after Bosniaâ€™s own institutions struggled to pass such a law for over two decades.Â

Serb leaders, including Dodik, have repeatedly denied Srebrenica is a genocide, despite it being declared as such in several rulings by the International Criminal Tribunal for the former Yugoslavia, and have celebrated the war criminals who committed it.

Dodik uses these denials â€”Â and his fight against the genocide law â€”Â as a means to claim he is protecting Bosnian Serbs from having the events permanently etched onto their legacy. And, like many nationalist leaders in the region, Dodik espouses the idea that accusing individuals or a group of genocide means accusing an entire nation of the same crime.

â€œThe law has been used for political means, even though all [EU] member states have similar legislation,â€ Schmidt said.

Schmidt insisted he would revoke the law if the Bosnian national parliament passes its own, â€œfollowing international and European standards.â€

Schmidtâ€™s most extraordinary power â€” unique in Europe for a position not directly elected in the country â€” is his ability to remove Dodik from office should he represent a clear threat to peace in the country. Schmidt told POLITICO he has not ruled it out.

â€œI would say Iâ€™m in a situation of flexible response,â€ he said. â€œI know what tools are at my disposal and I know they are not democratic in essence, but rather serve as a form of ceasefire.â€

However, Schmidt wants the EU to be the main player in Bosnia, especially since the country has begun its EU integration process and hopes to be a member someday. Schmidt recognizes, though, that he has more punitive power than the EU.

â€œHonestly, I have more sticks in my toolbox than the EU,â€ he said, â€œwhich says a lot about the EU and its carrots.â€Â

Indeed, the EUâ€™s restrained response may be difficult to change, given the blocâ€™s disunity on how to approach the situation.Â

While many EU countries have regularly admonished Dodik, Hungarian Prime Minister Viktor OrbÃ¡n has been a vocal supporter of the Bosnian Serb leaderâ€™s actions, stating in late December that it would be a security problem for Europe to integrate â€œa state with 2 million Muslims.â€

OrbÃ¡n has pledged a â‚¬100 million aid package for Dodik and Republika Srpska and opposed any potential EU sanctions, effectively blocking a German push for such penalties. The lack of action was highlighted earlier this month when the U.S. hit Dodik with its own round of sanctions.

In the meantime, if Dodikâ€™s goals remain undeterred, the legislative line that divides the Republika Srpska from Bosniaâ€™s other entity, the Federation of Bosnia and Herzegovina, risks becoming a very real border.

â€œThe line is no border, people walk back and forth and work on both sides,â€ Berjan said.

One would need a map to even deduce where the line runs. In front of Berjanâ€™s bar, the invisible border twists around the building before running down the street, then taking a sharp right and cutting through buildings and parking lots.

â€œWhat the politicians are doing has scared average people,â€ Berjan said. â€œI donâ€™t know a single person who wants to go to war or fight because we discuss that openly here.â€

He added: â€œBosniaks, Serbs and Croats â€” everyone comes to my bar and we all hang out together.â€