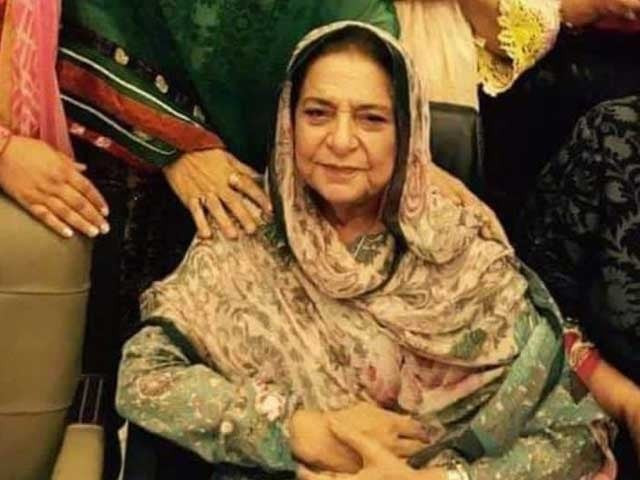 Former president of the Pakistan Muslim League-Nawaz (PML-N) women’s wing and senior parliamentarian Najma Hameed passed away on Saturday at the age of 78 after a prolonged illness.

The deceased was the face of the party in Rawalpindi and was a member of the Senate twice, the Express News reported.

Najma Hameed was the elder sister of PML-N leader Tahira Aurangzeb and the maternal aunt of Information Minister Marriyum Aurangzeb. She was also considered to be very close to PML-N supremo Nawaz Sharif and his spouse Kulsoom Nawaz.

She spent her entire life with the PML, and her residence in Satellite Town, Rawalpindi was always the centre of political activities. She was known to be a brave and intelligent political leader.

The deceased is survived by three sons. Her funeral prayers will be offered in Rawalpindi.

“Grieved to hear about the passing of Begum Najma Hameed, ex-PML-N Senator & the aunt of Marriyum Aurangzeb,” the premier stated through his Twitter handle.

He highlighted that Najma was a “committed and loyal party leader who served the country, party and democracy with dedication”. He prayed for the departed soul and condoled with the family.

Grieved to hear about the passing of Begum Najma Hameed, ex-PML-N Senator & the aunt of Marriyum Aurangzeb. She was a committed & loyal party leader who served the country, party & democracy with dedication. May Allah rest her soul in peace! My condolences to her family.

PML-N chief Nawaz Sharif also grieved over Najma’s passing, stating that he had lost a “compassionate, sincere and supportive sister” whose void will never be filled.

“She was a righteous and courageous political leader with strong ideals, a figure of sincerity and political tact,” Nawaz said in a statement.

He furthered that Najma had never panicked in any storm and remained loyal to political ideals and the party. The former prime minister said that the late senator’s support to his late wife was like an “iron wall” during the latter’s political struggles. She was “like a sister” to Kulsoom Nawaz.

“She was a Muslim League member since birth, and remained one from the creation of Pakistan till her death,” he said, adding that Pakistan, the ideology of Pakistan, and democracy were embedded in her being.

Nawaz saluted her for her services to the country, its people, the PML-N party and democracy.

He offered his condolences to the deceased’s sister and niece and prayed that she be granted a high rank in the afterlife.

Interior Minister Rana Sanaullah also expressed grief and sorrow over the death of the senior PML-N member. He offered his condolences to the deceased’s family.

He maintained that Najma was a senior leader of the PML-N and a former senator.

The minister prayed for her to be awarded the “highest positions in heaven”.

Information Minister Marriyum Aurangzeb was bereaved over the passing of her aunt and prayed for her forgiveness and high status in the hereafter.