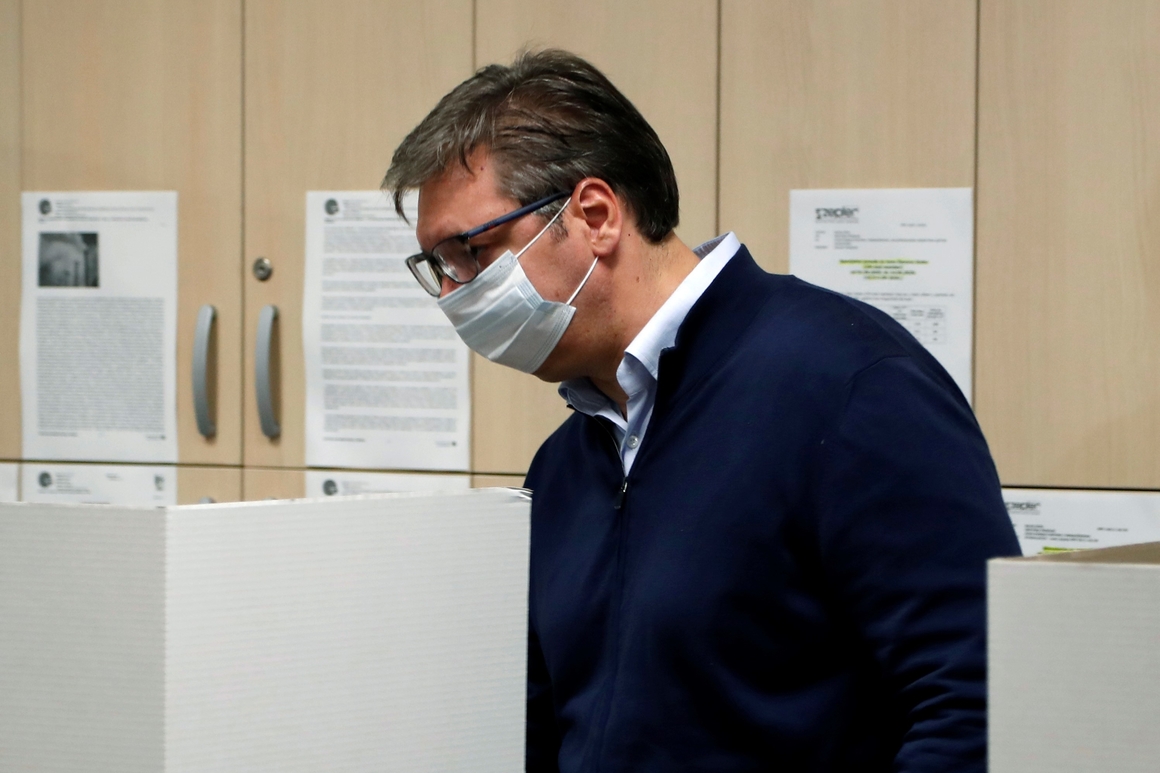 Serbia ended its state of emergency restrictions on May 6, and while the government has recommended certain safety measures, public events such as football matches with audiences of around 20,000 have resumed.

The win offers VuÄiÄ‡ a familiar victory as he heads off to Washington next weekend for talks hosted by the White House with the leader of Kosovo, Serbiaâ€™s breakaway province whose independence Belgrade does not recognize. The two states have been locked in a frozen conflict since 1999, when NATO bombing ended Serbian control of Kosovo in the last of the wars that tore Yugoslavia apart.

But the opposition also felt vindicated in the election’s low turnout after campaigning for voters to boycott the ballot to push for reforms: Turnout is thought to be around 49 percent. Although there is no legal requirement for a 50-percent turnout for elections to be valid, opposition parties argue that failing to reach that threshold delegitimizes the vote.

Dragan Äilas, the leader of the Union for Serbia, said he considered the boycott a success. â€œPeople were bussed in to vote, pressured, threatened, telephone calls, all of that was not enough for them to achieve over 50 percent turnout today,â€ Äilas said in a press conference.

VuÄiÄ‡ and his right-wing populist party have fared well in elections since first forming a government in 2012, due both to the presidentâ€™s individual popularity and his projected image as a defender of Serbian interests in the region and abroad, as well as a nationwide system of patronage that employs loyalists in public institutions and key industries.

For voters who work in public institutions, support for the party means maintaining the relative level of stability to which they have grown accustomed. â€œI live as well as I can in this part of the world, so Iâ€™m voting for those who enabled that for me. I work in a public institution and I want my daughter to work there too, so Iâ€™m not boycotting the elections,â€ said Marija Petrovic, 41, who voted in the Zvezdara region in Belgrade.

But opposition parties and movements have decried the ruling partyâ€™s hold on power within the country, organizing near-weekly protests for the past year and a half before the pandemic, and vowing to boycott elections.

The Progressive Party ultimately made some concessions, including lowering the threshold for parties to enter parliament to 3 percent from 5 percent of the vote. But the opposition bloc then split and some parties, such as the Movement of Free Citizens (PSG), led by one of the key figures of the protest movement, Sergej TrifunoviÄ‡, decided to run. PSG received around 1.8 percent of the vote and did not pass the threshold, according to the exit poll.

Hungarian Prime Minister Viktor OrbÃ¡n was one of the first international leaders to congratulate VuÄiÄ‡ on his victory on Instagram, posting a photo of the pair shaking hands.