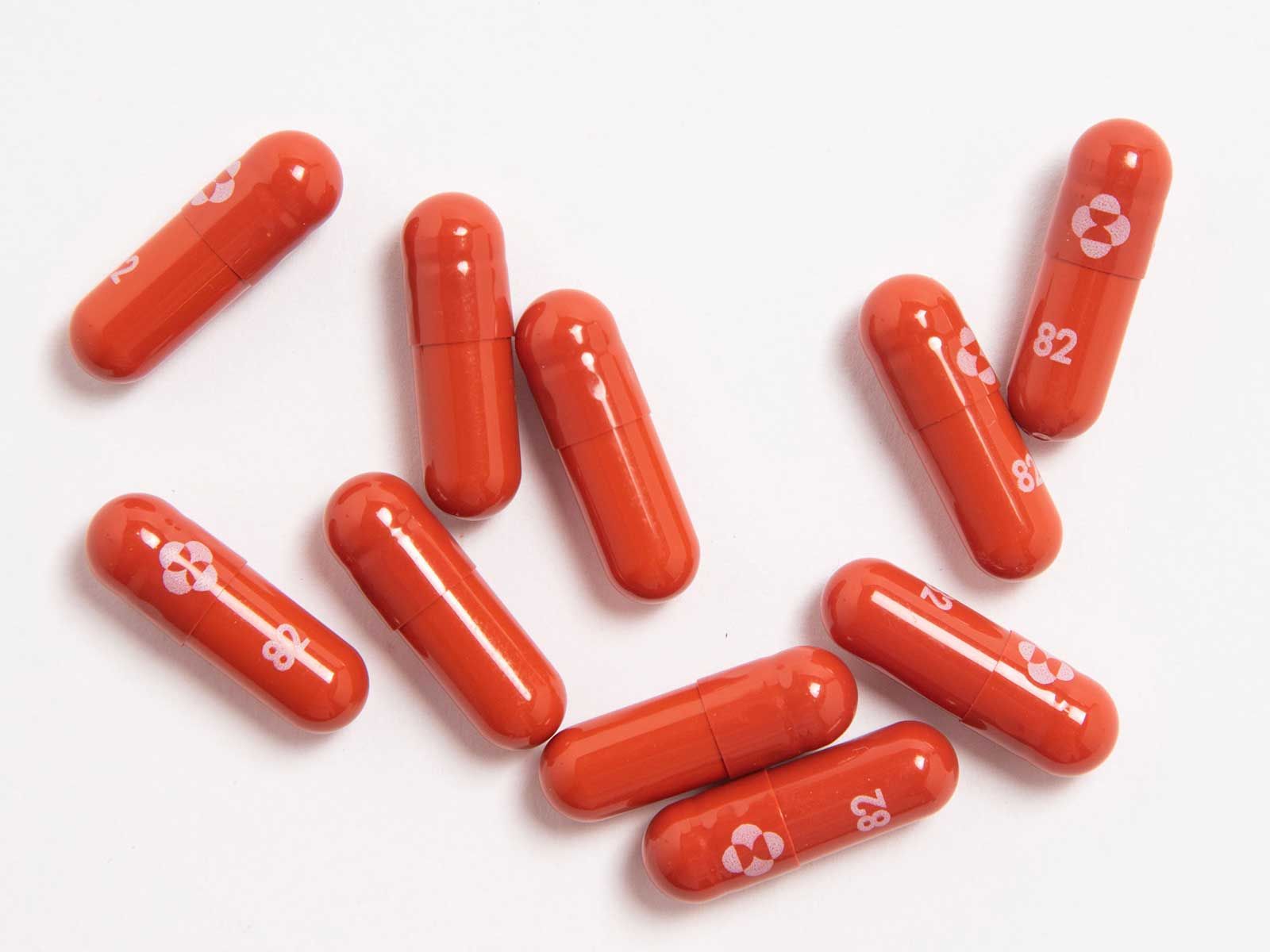 Vaccines have drastically reduced serious cases of Covid-19, but for those who do get infected, doctors have few treatment options. For the most seriously ill patients, theyâ€™ve prescribed drugs like dexamethasone, a corticosteroid that works to calm the overactive immune system which can wreak havoc on our bodies in the name of fighting off the virus. Theyâ€™ve used blood-thinners in hopes of staving off dangerous clots that can accompany infection. Theyâ€™ve prescribed monoclonal antibodies, which have shown promise in mitigating illness when given early enough, but theyâ€™re expensive and need to be administered with an IV.

Only one antiviral drug, a medicine that specifically aims to prevent a virus from overwhelming your body, has been approved to treat Covid: remdesivir. Unfortunately, the treatment is also an infusion, and must be given by IV in the hospital. While it does help some patients recover and leave the hospital faster, it is far from a blockbuster.

But several companies are testing antiviral pills that individuals can take as soon as theyâ€™re diagnosed with Covid to stop the virus in its tracks and hopefully protect the person from severe disease. On Friday, October 1, Merck was the first to announce interim results from a Phase 3 trial suggesting that its pill, molnupiravir, could cut Covid hospitalizations in half. Ten days later, the company submitted data to the FDA in hopes of gaining emergency use authorization.

Some have called the drug a â€œgame-changerâ€ in the fight against Covid-19. Others have tempered their enthusiasm, saying the hype is a result of the countryâ€™s failure to prevent Covid through vaccination. With news about antivirals increasing, weâ€™ve answered seven key questions about the treatments to help you understand what their role in managing the pandemic might be.

1. How Do Antivirals Work?

In order to wreak havoc on your body, a virus has to do more than get inside you; it has to replicate. Fortunately, viruses donâ€™t have the organelles they need to make copies of themselves. Unfortunately, your cells do. All the virus has to do is provide the instructions and your cells will do the work of building an armyâ€”which then causes cellular destruction as it grows.

Antiviral medications work by interrupting this process. Remdesivir, the only antiviral currently authorized to fight SARS-CoV-2, works by inhibiting an enzyme that the virus needs to replicate.

Molnupiravir, on the other hand, works through deception. While your cells are building new strands of viral RNA, the drug replaces some of the necessary pieces. These imposters go on to cause mutations in the newly replicated virus that make it unstable. Enough mutations, and the virus collapses before itâ€™s even done being built. Imagine youâ€™re trying to build a house out of bricks, but a quarter of your bricks are made of red paper rather than clay. You wouldnâ€™t get very far.Â

The antivirals are all â€œsimilar in that they all block viral replication,â€ says Bettie Steinberg, a virologist at the Feinstein Institutes for Medical Research. â€œBut they do it in different ways.â€

If the virus canâ€™t replicate, your immune system can easily overwhelm it. Itâ€™s the difference between fighting off a handful of scattered soldiers versus an entire army thatâ€™s growing exponentially.

2. How and When Would You Take Them?

One of the reasons doctors and scientists are excited about molnupiravir is that it would be taken orally, meaning if you test positive for Covid, you could stop by your local pharmacy, pick up the pills and take them at home. This would mean you could start taking them almost immediately after testing positive for the diseaseâ€”before it ravaged much of your body. Youâ€™d need to take four pills twice a day for five daysâ€”a total of 40 pills.

In the clinical trial, Merck gave molnupiravir to individuals who developed symptoms in the last five days and were considered to be at high risk for severe illness, like those over the age of 60 or who had preexisting conditions such as heart disease or diabetes. The drug cut the risk of hospitalization in half: about 14.1 percent of patients who took a placebo ended up in the hospital compared to only 7.3 percent of those who were given molnupiravir. No one who took the drug died, but eight who were given a placebo did.

â€œThis is a dream to me,â€ says Monica Gandhi, an infectious disease specialist at the University of California San Francisco.

3. Could You Benefit From an Antiviral Even If Youâ€™re Vaccinated?

All of the molnupiravirâ€™s trial participants were unvaccinated. Steinberg explains that this was a strategic decision to expedite data collection. â€œThey wanted to show that it prevented hospitalization and death. If you were working with a vaccinated population, you would need a much bigger study group and more time to show the effect,â€ she says, because even those in the placebo group would be unlikely to get severely ill if they were previously vaccinated.

Since the trial only included these patients, Gandhi says the FDAâ€™s authorization may only cover unvaccinated patients, but once itâ€™s approved â€œall bets are off,â€ and doctors can prescribe it to the patients they think will benefit. Steinberg adds that since antivirals and vaccines work differently, â€œthereâ€™ll be no reason why you couldnâ€™t,â€ use an antiviral drug if youâ€™re vaccinated and have a breakthrough infection.

4. How Do Antivirals Affect Transmission?

Remdesivirâ€™s effect on transmission is limited by the fact that it isnâ€™t administered until youâ€™re already severely ill, but antivirals that are used earlier, like molnupiravir, might be able to slow the diseaseâ€™s spread.

Data from earlier studies of molnupiravir showed that those who received the drug harbored less virus in their noses than those who didnâ€™t. Five days after starting treatment, none of the molnupiravir patients had detectable levels of virus in their noses, but 11.1 percent of patients on a placebo did. Fewer viral particles in the nostrilsâ€”a location from which they can easily spread to other individuals through breathing, coughing or sneezingâ€”means that that the patients were less likely to infect others, explains Gandhi.

5. Will Antivirals be Effective Against New Variants like Delta?

According to Merck, more than three-quarters of the patients in their Phase 3 trial were infected with Delta, Gamma or Mu variants of the virus. Since the drug introduces random mutations throughout the virus, rather than targeting only the spike proteins on its outside, the company expects it to retain its efficacy against future viral variants as well. Whether or not the other drugs work efficiently against known variants remains to be seen.

6. Do Antivirals Have Side Effects?

Some patients taking remdesivir experience liver damage and serious allergic reactions. Detailed safety data from molnupiravirâ€™s Phase 3 trial isnâ€™t yet public, but according to the press release, adverse effects were actually more common in the placebo group than in the group that received the drug.

However, Steinberg warns, we might need to watch out for one long-term effect. Since it works by introducing genetic mutations into the viral RNA, itâ€™s possible that the drug could introduce mutations into our own DNA as well. This could lead to babies being born with birth defects. â€œWe’ve seen it with some antivirals. We’ve seen it with other drugs,â€ she says.

Pregnant women were excluded from molnupiravirâ€™s trials and both men and women capable of reproducing were instructed to use highly effective contraception while taking the drug and for at least four days after. Gandhi says that while these guidelines to avoid pregnancy are common for any new antiviral that works the way molnupiravir does, itâ€™s unlikely that taking the drug for only five days will cause birth defects. Plus, â€œfour days is plenty of time for the pill to be gone from your system.â€

7. When Will They Be Available?

Merck applied for FDA approval for molnupiravir on Monday, October 11. The company is already manufacturing doses and expects to have enough for ten million patients by the end of this year, though demand is likely to be much higher if itâ€™s approved. The U.S. and several other countries including Malaysia, South Korea, Australia and Singapore have already made deals to purchase batches of the drug.

If the other antivirals in development are approved, they may help ease a potential shortage next year.