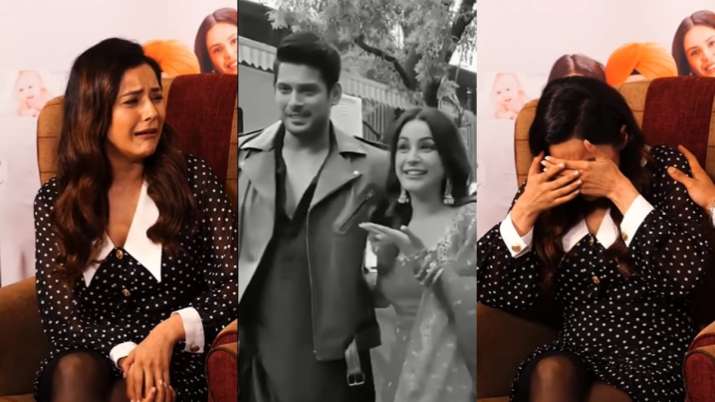 After Sidharth Shukla’s shocking demise, the first thing fans searched for was the condition of his dear friend Shehnaaz Gill. The two actors impressed everyone with their chemistry in Bigg Boss 13 after which Netizens gave them the name of ‘SidNaaz.’ After a month of remaining silent and off-the-camera, Sana came out in the public eye due the release of her film ‘Honsla Rakh.’ While everyone caught hold of her sad eyes then, a video from the promotions of the film has now gone viral. In the same, Shehnaaz can be seen breaking downÂ in the middle of the interview while remembering the late actor and her rumoured boyfriend. While many are understanding her condition, there are others who are urging not to share the same and respect her privacy.

Speaking about the video, it captures Shehnaaz wearing black and white pola-dotted dress.Â It can be seen in the video how Shehnaz is crying bitterly.Â During her emotional moment, singer-actor Diljit DosanjhÂ is seen consoling her. This unseen video of the promotion of Punjabi film ‘Honsla Rakh’ has surely made everyone emotional.

Celebrity photographer Viral Bhayani, in his latest Instagram post, revealed the reaction of fans post the video went viral. He wrote, “A video of #shehnaazgill breaking down during the #honslarakh promotions has gone viral. Shehnaaz breaks down thinking about #sidharthshukla and #diljitdosanjh is seen embracing her. But it has not gone down well with her fans and they are uniting to inform everyone not to use that clip. Fans only want to see her back happy and they care so much for her. Respect.”

For those unversed, Sidharth pased away at the age of 40 on September 2, 2021 due to massive cardiac arrest.Â

After his demise, Shehnaaz dedicated a music video ‘Tu Yaheen Hai’ to the late actor that made fans emotional. The songÂ has been sung by Shehnaaz Gill and has been written by Raj Ranjodh.

The two after coming out of the Bigg Boss house worked in a number of projects including songs like Shona Shona and Bhula Dunga.