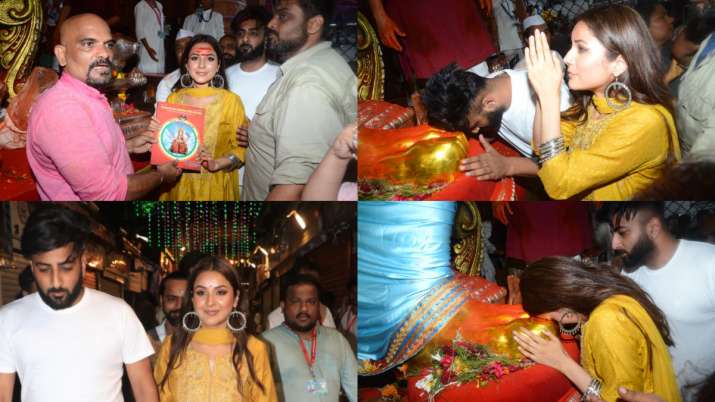 Shehnaaz Gill on Monday made a striking appearance as she visited Lalbaugcha Raja, a prominent Ganesh pandal in Mumbai, along with her brother Shehbaz Badesha. The actress was dressed in a bright yellow suit with golden detailing. She accessorized the look with oxidized hoops and silver bangles. She kept her hair open and to complete the look she applied black kohl and winged eyeliner. On the other hand, Shehbaz opted for a plain round-neck t-shirt. She completed the look with beige pants. What caught everyone’s attention was late actor Sidharth Shukla’s face tattoo on Shehbaz’s arm.

Check out the pictures:

In no time, Shehnaaz’s fans bombarded the post with sweet reactions. One of the fans wrote, “Stunning in yellow.” “Absolutely gorgeous,” a fan commented. Another fan said, “Eye feast for sidnaazians.” “Love you pure soul,” a fan wrote.

Shehnaaz Gill, a Bigg Boss 13 contestant was reported to be the girlfriend of the late Sidharth Shukla. The chemistry between Sidharth and Shernaaz was very much in the limelight since they were seen together on ‘Bigg Boss 13’. Sadly, the world got to see a very distraught Gill after the sudden death of Shukla on September 2 last year.

On the work front, Shehnaaz Gill is set to make her Bollywood debut with Salman Khan‘s Kisi Ka Bhai Kisi Ki Jaan. However, an official announcement of the same is yet to come from the actor and the filmmakers. Helmed by Farhad Samji and produced by Sajid Nadiadwala. The movie, which will have Pooja Hegde as the female lead, is scheduled to release on December 30, 2022.

She will also be seen with  John Abraham, Riteish Deshmukh and Nora Fatehi in a multi-starrer directed by Sajid Khan. The film, which has been titled ‘100%’, will be produced by Bhushan Kumar and Amar Butala. It is slated to release on Diwali 2023.